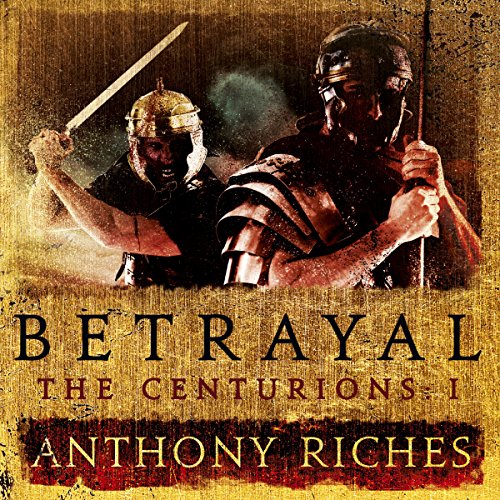 Written by: Anthony Riches
Narrated by: Mark Noble
Try for $0.00

Rome, AD 68. Nero has committed suicide. One hundred years of imperial rule by the descendants of Julius Caesar has ended, and chaos rules. His successor, Galba, dismisses the incorruptible Germans of the Imperial Bodyguard for the crime of loyalty to the dead emperor. Ordering them back to their homeland, he releases a Batavi officer from a Roman prison to be their prefect. But Julius Civilis is not the loyal servant of empire that he seems.

Four centurions, two Batavi and two Roman, will be caught up in the intrigues and the battles that follow - as friends, as victims, as leaders and as enemies. Hramn is First Spear of the Bodyguard. Fiercely proud of his men's honour and furious at their disgrace, he leads them back to the Batavi homeland to face an uncertain future. Alcaeus is a centurion with the tribe's cohorts serving Rome on the northern frontier - men whose fighting skills prove crucial as Roman vies with Roman for the throne. A wolf-priest of Hercules, he wields the authority of his god and his own fighting prowess. Marius is a Roman, first spear of the Fifth Legion: a self-made man who hates politics but cannot avoid them in a year of murderous intrigue. Aquillius, former first spear of the Eighth Augustan, like Hramn, is in disgrace for refusing to dishonour his oath of loyalty. But their paths will lead them to opposite sides of an unforgiving war.

And Civilis, Kivilaz to his countrymen, heroic leader, Roman citizen and patriotic Batavi, will change the course of both the empire's destiny and that of the centurions.

What listeners say about Betrayal

Unlike Empire, there are a LOT of characters, and units....given that I listen to these books on my way to/from work, I often found myself rewinding, going back, to get clarity on what was going on. That some of Mr. Ritches' characters often use fifteen or thirty words in a sentence, when three or four would suffice, does not help but damn his books are addictive.

It's very good, definitely worth reading

My only problem was it, at first, is a bit convoluted and hard to follow. There are so many major players at first, it's a little trouble keeping up (especially with similar Roman names). Eventually you catch on, the the novel hit its climactic battle and ended. I wanted more!

Wasted read for my time

The narrator's too quick transition was as bothersome as his sameness of characte voices. Had wished the author had settled on a single protagonist to center the 'story.'
have not read him before nor will I.

Very disappointed. The narrator speaks too soft and then yells. His fake accent sounds too much like a certain Austrian actor. As far as the story, to much repetition.

I enjoy novels of Roman history based on facts. Anthony Riches does a commendable job.

The author says the politics are confusing.

The politics are vonffusing. I may have misread,, but in two prior novels, in 1_Marcus apparently died and in anoother, his wife died in childbirth

I like books that move. When they get bogged down with jibber jabber I skip it.
I can’t finish this book.

good book and interesting ... not exiting or thrilling. not sure if I'd listen to it again.