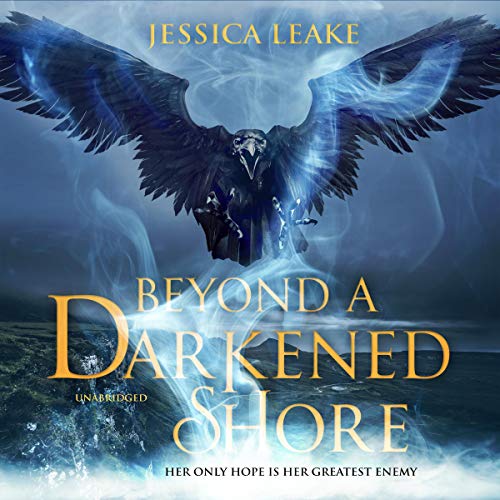 Beyond a Darkened Shore

The ancient land of Eirinn is mired in war. Ciara, princess of Mide, has never known a time when Eirinn's kingdoms were not battling for power or Northmen were not plundering their shores.

The people of Mide have always been safe because of Ciara's unearthly ability to control her enemies' minds and actions. But lately a mysterious crow has been appearing to Ciara, whispering warnings of an even darker threat. Although her clansmen dismiss her visions as pagan nonsense, Ciara fears this coming evil will destroy not just Eirinn but the entire world.

Then the crow leads Ciara to Leif, a young Northman leader. Leif should be Ciara's enemy, but when Ciara discovers that he too shares her prophetic visions, she knows he's something more. Leif is mounting an impressive army, and with Ciara's strength in battle, the two might have a chance to save their world.

With evil rising around them, they'll do what it takes to defend the land they love - even if it means making the greatest sacrifice of all.

What listeners say about Beyond a Darkened Shore

I mean... it wasn’t horrible

So, let me preface by saying I didn’t hate it. I enjoyed it, really, but there were a lot of little issues.
1. I felt the performance was extremely slow and lacking. I didn’t feel much emotion and there were a lot of awkward breaks in sentences and lulls. It was almost a dnf (did not finish) for me because I just couldn’t get on board with the plodding along performance (however she did leaps and bounds better than I would have)
2. The story was good. I thought the plot was good and everything, but there were a lot of inconsistencies. So, irl, when you climb a 20,000ft mountain you (now) use oxygen, you cover your everything, and you have trouble breathing and speaking. But that doesn’t make for a good dialogue setting. There was only one person with breathing issues and it seemed to be asthma that was only slightly affected by climbing. Which didn’t really make sense. Also I felt like gloves would appear and disappear from one scene to the next, and just a general sense of “this seems highly unlikely” throughout most of the book (when it came to climbing and such.)
3. I did like the book and I will be reading the next one, and I recommend it if you are okay with a few minor inconsistencies here and there

I’m more of a sexy romance fan generally, but sometimes I enjoy a good fantasy. Wow, this book didn’t need any sex with all the passion and heartache (besides, I’m not a huge fan of teenage sex scenes). It was so good and hard to stop listening. I found myself having a difficult time multitasking while listening because I kept getting swept up into the story and solely focusing on it. It made me smile and even cry. It was full of strength and courage and love and it was just awesome all around.
It starts a little slow which is why it was in my library for 6 months but trust me, it gets good fast and stays high paced for nearly the entire book.
Do yourself a favor and listen to it!

I loved the story and conflicts that took place throughout the book. The way that the heroine was able to let go of her anger at the end.

The perfect mashup of two worlds

What started off just a little slow turned out to be something I couldn’t put down! The mash up of the Norse and Celt cultures kept my earbuds tightly in. Twists and turns with plenty of adventure. The speakers performance was a delight to listen to as well! 10/10!

loved the story but struggled to finish.

love the story but have to admit I did struggle to finish it. Although the narrative voice is Pleasant and her performance of the characters is good the actual narration had such a distinct sing song pattern and cadence that became so predictable it actually took away from the story by making the words kind of blend together that, in the end, made it difficult to listen to.

A teenage love story set 1000 years in the past with supernatural powers, Irish and Norse mythology, and a handsome Viking captain. This had many twists and turns and each more delicious than the last.

Glad I discovered this author

I enjoyed both the story and narration performance. I am fascinated by Norse and Celtic mythology, so this was a pleasant discovery. The narrator's voice was the perfect one to tell this enchanting tale. I will look for other books by this author. Definitely worth listening to.

I absolutely loved this story and the combination of Irish and Norse folklore! Great action and humor! also a enemy to lovers story;)

kept me interested throughout. also like the readers voice/ accent. started out as a free read about half way in it went to a pay book not sure what that's about.