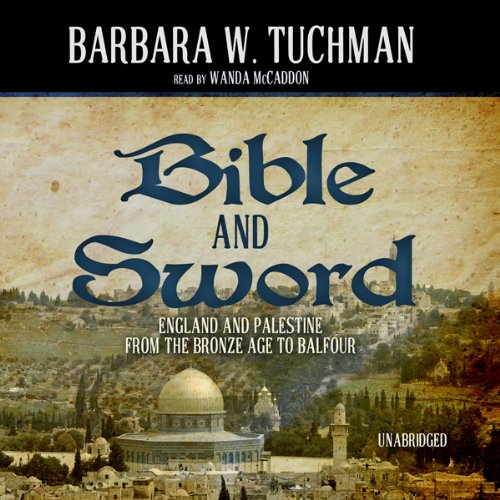 Two-time Pulitzer Prize - winning historian Barbara Tuchman explores the complex relationship of Britain to Palestine that led to the founding of the modern Jewish state - and to many of the problems that plague the Middle East today.

From early times, the British people have been drawn to the Holy Land through two major influences: the translation of the Bible into English and, later, the imperial need to control the road to India and access to the oil in the Middle East. Under these influences, one cultural and the other political, countless Englishmen - pilgrims, crusaders, missionaries, merchants, explorers, and surveyors - have made their way to the land of the ancient Hebrews.

With the lucidity and vividness that characterizes her work, Barbara Tuchman brings to life the development of these twin motives - the Bible and the sword - in the consciousness of the British people, until they were finally brought together at the end of World War I when Britain's conquest of Palestine from the Turks and the solemn moment of entering Jerusalem were imminent. Requiring a gesture of matching significance, that event evoked the Balfour Declaration of 1917, establishing a British-sponsored national home for the modern survivors of the people of the Old Testament.

In her account, first published in 1956, Ms. Tuchman demonstrates that the seeds of today's troubles in the Middle East were planted long before the first efforts at founding a modern state of Israel.

"Barbara Tuchman is a wise and witty writer, a shrewd observer with a lively command of high drama." ( Philadelphia Inquirer)
"In her métier as a narrative popular historical writer, Barbara Tuchman is supreme." ( Chicago Sun-Times)

What listeners say about Bible and Sword

Excellent book, but not quite objective

As usual, Barbara Tuchman offers up a well-written, heavily researched book that is entertaining and informative, but I found the lack of objectivity in places so strong that it made me question her grasp of the subject matter. I get it that she doesn't subscribe to the Judeo-Christian tradition as a personal faith, but it seems like she has so little respect for it that she ended up misinterpreting or just plain missing the finer points of these two religions that she doesn't stoop to understand. The conclusions she draws are weaker for it, I feel. Maybe Nadia May's sneering tone exacerbated this sense... after listening to her narrate three Tuchman books in a row now, I'm starting to dislike her voice quite a lot. Still... the book has MUCH insight to offer, all the same, and I would recommend it for a thorough chronicle of the progression of events and motives that led to the curious position we find ourselves in today.

Great historical insight into how we got to today

Once again, Barbara Tuckman has done a fine job of bringing history to life. Her review of the 1900 years of English fascination with the Holy Lands/Palestine leading up to the Balfour Mandate was very interesting. The insight on how all of that history led to the recreation of Israel as a Nation in Palestine was very informative. There is much shared in this book that many miss when considering the current situation of Arab and Jew.

It's hard to say who would or even could enjoy it more. This subject was right up my alley but was incredibly dry. So dry that even a reading by McCaddon couldn't save it.

What was most disappointing about Barbara W. Tuchman’s story?

It was not remotely as engaging as Guns of August

Which character – as performed by Wanda McCaddon – was your favorite?

If you could play editor, what scene or scenes would you have cut from Bible and Sword?

Hard to say I would have cut anything so much as rearranged it or expanded them.

I might give this another try. Maybe the issue is that the book doesn't lend itself to an audio version and the printed work is much easier to follow. The storytelling was lacking for an audible presentation.

Shows its age, but is stately, lyrical, epic

This is music to the ears of certain anglophiles (like me). If the title seems interesting, dive in! I like a sweep through history illuminating various landmarks, some I recognize, some not so much. The story of the Jews in Europe, like the stories of England, are things I will visit repeatedly, all my days. This has a nice punchy pace to it, not bogging down, but lingering just long enough to get crucial glimpses of personalities, places, and deeds. Many quotes come from the original actors, through the particular lenses of their times and prejudices -- the better to reveal them to us.

Its thesis is a stretch.

This is a disappointment after reading the incomparable "Guns of August". I think this is written with more much emotional bias. The author attempts to convince us of the lengthy and deep connection between the English and the Jewish people. I had to slap myself to be sure I wasn't hallucinating. And then portraying Catholics as uneducated, devilish idolaters I found offensive (I am a catholic). I'm pretty sure the Jews were expelled from England quite early on. This and their terrible treatment beforehand bely this whole idea of an unbroken brotherhood.

A Triumph of History over Modern Revisionism

Remarkably well written and well read, this book peirces a clear and straight line through the hopelessly tangled morase of British culture, religion, conquest, statesmanship, vitriolic antisemitism, devout zionism, greed, and hope on the way to a turbulant determination to reedtablish in "the Holy Land" a cradle for the nascent idea of Isreal; first ,as a home for dispersed Jews, and eventually, possibly, as a self-determined Jewish state.

I knew the history of the Palestine, but not how woven British history was with it back thousands of years. Well researched and explained. I'm downloading my next Tuchman book now.

Again this is a great book to help you understand the history and troubles of the holy land and why the three main world religions have been fighting for 2000 years. I pray that the world could just gain the understand of each others religions could help to bring peace to all. Great book to learn why we do what we do.

A very thorough examination of literature over the centuries revealing Britain's and England's peculiar relationship with the Hebrews and Zionism. Good for the amateur; essentail for the scholar.

Certainly an interesting look at the relationship between England and the Holy Land (although I’m sure such a book could be written about France and the Holy Land). Like several Audible book renderings, the reader makes laughable attempts at certain English place names, etc.

Overall, both informative and entertaining.