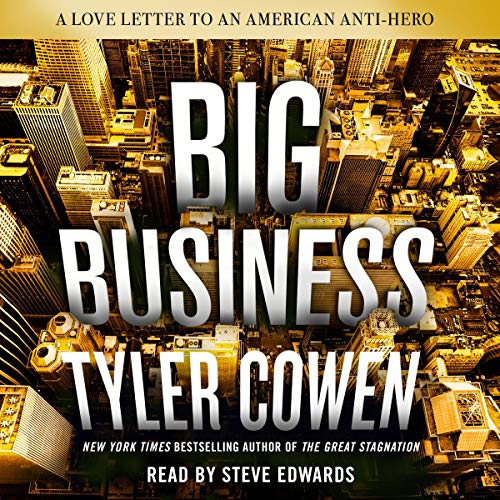 We love to hate the 800-pound gorilla. Walmart and Amazon destroy communities and small businesses. Facebook turns us into addicts while putting our personal data at risk. From skeptical politicians like Bernie Sanders who at a 2016 presidential campaign rally said, “If a bank is too big to fail, it is too big to exist,” to millennials, only 42 percent of whom support capitalism, belief in big business is at an all-time low. But are big companies inherently evil? If business is so bad, why does it remain so integral to the basic functioning of America? Economist and best-selling author Tyler Cowen says our biggest problem is that we don’t love business enough.

In Big Business, Cowen puts forth an impassioned defense of corporations and their essential role in a balanced, productive, and progressive society. He dismantles common misconceptions and untangles conflicting intuitions. According to a 2016 Gallup survey, only 12 percent of Americans trust big business “quite a lot”, and only six percent trust it “a great deal”. Yet Americans as a group are remarkably willing to trust businesses, whether in the form of buying a new phone on the day of its release or simply showing up to work in the expectation they will be paid. Cowen illuminates the crucial role businesses play in spurring innovation, rewarding talent and hard work, and creating the bounty on which we’ve all come to depend.

What listeners say about Big Business

I enjoyed the content of this book, but I've rarely heard an Audible title read so poorly. The reader has a pleasing voice, so I can see why he's found work. But his reading style is mechanical, and he misses many nuances in the writing. And in many ways, he sounds like a computer tasked with reading the book, with no feel for the English language. For example, he pronounces almost every "the" as "thee" when a normal English speaker would usually say "thuh," and he pronounces almost every "a" as "ay" when it would usually be "uh." He also doesn't seem to know that "estimate" ends in "mate" when it's a verb and "mutt" when it's a noun. Is English his second language? It's puzzling to me that no director or editor was involved to correct these failings. And I feel bad for the author, who wrote a first-rate book but got a second-rate reading.

Marred, for me, by performance

I'm here to lament one aspect of the performance. It is otherwise competent, but the reader mispronounces two of the most-frequently occurring English words: the definite and indefinite articles, "the" and "a". In their normal, as opposed to emphatic, uses, the pronunciation should be with short vowel sounds: "thuh" and "uh"; the vowel sound is what is called a schwa. Pronunciation with a long vowel sound, as "thee" and "ay [to rhyme with "hay]" is appropriate only for emphasis, as in, "This is *the* store for fresh produce", or "it's *a* book, but not the *best* book" (asterisks here in lieu of italics or boldface). For "the", the long vowel sound may also be used before a word with an initial vowel. But in ordinary usage, the schwa vowel sound is correct, whether you prefer a prescriptivist or descriptivist interpretation of "correct." To my ear, the pronunciation with the long vowels is like that of an elementary-school child, and is a constant source of irritation in listening to this audiobook.

Very thin arguments with predictable examples and few insights. Would not recommend, his other books are way better.

Interesting content but robotic narration. Surprised I stuck it out. Book is a good counterpoint to a lot of popular sentiment though.

Although I don't agree with everything and done of the premises of his arguments, overall this book is well worth the listen.

Title does not deliver what is promised

This book is one quick money grab and a huge waste of time. The title may get your attention and may even get you to buy it, but the content in this book just doesn't deliver any valid argument. The title leads one to think it will be an argument in defense of big business but alternatively ends up being a thesis about the wonders of Capitalism and how great small businesses are. It is a generic defense of business in general NOT a defense of big business. Mr. Cowen conflates criticism of big business with criticism of small business and entrepreneurial activity. If I were to critique the structural integrity of a particular building within a city because I believed it to have flaws in it's foundation, you wouldn't turn around and argue in defense of the concept of cities or the idea of people living together in harmony. You would not defend the construction industry as a whole. You would however logically turn around and defend that particular building that was being critiqued. If something is wrong in the foundation of a building, you look at that foundation. You question it. You bring in experts and get other opinions. These days if someone even critiques big businesses, people immediately slide over to a defense of capitalism. Even if there were something wrong with capitalism (which I don't) it's alright to critique it, to examine it, to investigate it and yes even to question it from time to time. That is the point of our free society and democracy. There is a trend these days especially amongst proponents of big business to rebut criticism of their favorite big business with a defense of capitalism and entrepreneurial endeavor. Big business must be questioned and examined from time to time if we are to address the negative effects of these big businesses even if they "create jobs" albeit minimum or just above minimum wage jobs. I respect Mr. Cowen as an economist and yet I cannot agree with this shady tactic to sell a quick book. I did some research and watched several of Tyler Cowen's lectures to get a better grasp on his main ideas around economics. He is a solid economist with a flair for contrarianism. He himself admits in many of his videos that he loves to play the contrarian. This book is exactly that. Tyler Cowen playing the contrarian to get your attention with an outlandish title to make a quick buck. The content of the book however does not deliver. Don’t waste your money or time.

Tyler Cowen at his best

Great book by a great economist, thinker and polymath arguing that big business is underrated

Does what it says on the tin

Right in general and almost all particulars, but feels a little unnecessary. if you're reading books by Tyler Cowen you probably already know most of this anyway so there aren't any surprises. This is itself a demonstration of one of the book's main points (that corporations - or in this case, an individual with a personal brand sufficiently recognizable that he may as well be one) mostly tend to do whatever it is the customer hired them to do. Five stars for Striking a Blow for Truth And Justice; -1 for being somewhat redundant. (I still enjoyed it, as one enjoys all cheering for one's own side. And I'll definitely still buy Tyler's next book, proving yet another of the book's points in the process.)