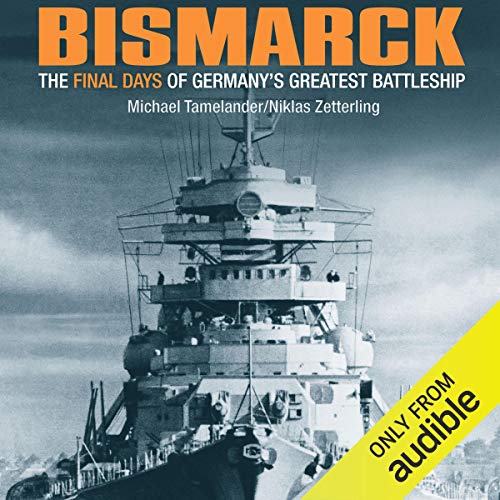 A gripping tale of heroism - and doom - on the high seas....

The sinking of the German battleship Bismarck - a masterpiece of engineering, well-armored with a main artillery of eight 15-inch guns - was one of the most dramatic events of World War II. She left the port of Gotenhafen for her first operation on the night of 18 May 1941, yet was almost immediately discovered by Norwegian resistance and Allied air reconnaissance. British battlecruiser Hood was quickly dispatched from Scapa Flow to intercept the Bismarck, together with new battleship Prince of Wales. They were ordered to find the ship quickly because, on their way from the USA, several large convoys were heading for Britain.

On 24 May, Bismarck was found off the coast of Greenland, but the ensuing battle was disastrous for the British. The Hood was totally destroyed within minutes (with only three crewmen surviving), and Prince of Wales was badly damaged. The chase resumed until the German behemoth was finally caught, this time by four British capital ships supported by torpedo-bombers from the carrier Ark Royal. The icy North Atlantic roiled from the crash of shellfire and bursting explosions until finally the Bismarck collapsed, sending nearly 2,000 German sailors to a watery grave.

Tamelander and Zetterling's work rests on stories from survivors and the latest historical discoveries. The book starts with a thorough account of maritime developments from 1871 up to the era of the giant battleship, and ends with a vivid account, hour by hour, of the dramatic and fateful hunt for the mighty Bismarck, Nazi-Germany's last hope to pose a powerful surface threat to Allied convoys.

What listeners say about Bismarck

A must read for any WWII Naval Historian!

This was an excellent book! I love reading about naval history and the battles from WWII. Though the days of the surface to surface warfare on the high seas are all but gone, there is something exciting about steel vessels hunting for one another in the North Atlantic that had my attention from the first chapter.

It's 1941 so the regular use of radar and sonar for that matter cannot be relied upon so navies from both the Axis and Allies had to rely on intercepted radio transmissions, last known positions, and the human eye to track and hunt the opposition. And now it is up to the Royal Navy to hunt and destroy one of the worlds most powerful battleships even after they have been beaten with the sinking of the HMS Hood.

The writer does an excellent job conveying this well-known story from both the German and British perspectives. Never getting ahead of either, Zetterling effectively goes back and forth between the two navies to explain what each was doing, thinking, and attempting to do while integrating countless anecdotes from those who were there. Thoroughly enjoyable!

What did you love best about Bismarck?

This is a serious maritime history, which is hard to find these days. It is excellently narrated by Charles Constant, who has the voice for it, and the intuitive feel for this type of material. Some of the sentences in the book are long and complex. Mr Constant knows where to pause verbally to break them into understandable segments. And he knows how to give emphasis without over-dramatizing. I'm a dedicated history reader (and listener). I wish some of my other favorite history audiotapes had been narrated by this man. Too often, the books are narrated by people who don't have a feel for the material, and don't how to pace it verbally. This, on the other hand, is a first-rate performance.

What other book might you compare Bismarck to and why?

Graf Spee by Dudley Pope. Guns of August by Barbara Tuchman. Along with this book, they are serious histories, related in a way that is respectful of the material.

Which character – as performed by Charles Constant – was your favorite?

Captain Ernst Lindemann. A master seaman, who took what care he could for his men under ultimately terrible circumstances.

The writing for "Bismarck" is so excellent, so compelling, and frequently so exciting that it breaks my heart not to be able to recommend this audiobook highly.

The reason? The reading is amateurish. It simply ruins the book. I stuck it out to the end only because I wanted to learn more about the war in the North Atlantic, and about the fate of the Bismarck, but the halting, robotic narration, and the constant mis-emphasis on nearly every sentence made it tortuous indeed.

The battle scenes are truly remarkable. One can easily envision the spectacular sights and sounds—from the ship, the men, and the huge guns. Again, however, the narration almost totally obscures both the excitement and the action. What a pity.

Apparently, the publishers also recognized their mistake, and picked a far more skilled narrator for the reading of "Tirpitz," the story of the Bismarck's sister ship, by the same authors.

What made the experience of listening to Bismarck the most enjoyable?

Although we know the outcome the story is rendered in an interesting manner.

What was one of the most memorable moments of Bismarck?

The Catalina's discovery of Bismark.

The death of the Hood.

Interesting story told with the enthusiasm of toothbrush manual

I kept getting the strong feeling that the narrator was reading from a power point. No voice modulation, changes in cadence, etc. it was nearly painful. Overall, I was able to get through the story, but it could have been so much better.

It felt like I was listening to a computer generated voice explaining how to change a tire.

This was a great book. It gives you the typical information about the life of the Bismarck, but you also get to spend a little time with Lutjens on the Scharnhorst before hand. Along with this, you also get better light on how things proceeded from the British side when trying to find the Bismarck at sea. The KMS Bismarck was a great battleship, that lead a very short life.

Like many history books, the density can be very difficult to follow. However, if you can follow it, the brilliance of the strategy and planning and deduction of these men in history cannot be overstated.

A must listen for any naval history buff

Spends a little too much time setting the stage, but otherwise, this is a thrilling, fascinating and comprehensive telling of the last great battleship fight. I appreciated the author's heavy reliance on eyewitness accounts from those who were there, on both the British and German sides.

The narrator is worse than a computer voice. Truly disappointed in him and he easily makes my list of never again narrators