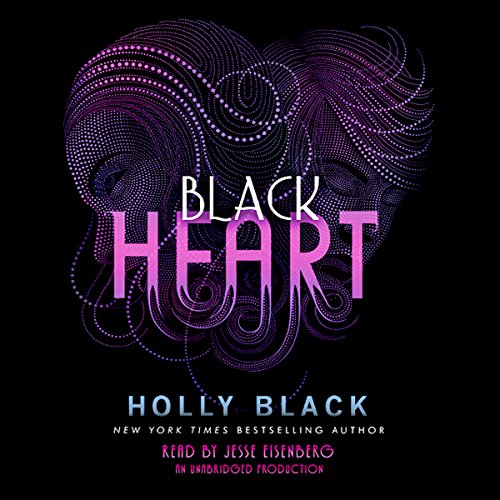 Written by: Holly Black
Narrated by: Jesse Eisenberg
Try for $0.00

In a world where magic is illegal, Cassel Sharpe has the most deadly ability of all: With one touch, he can transform any object - including a person - into something else entirely. And that makes him a wanted man. The Feds are willing to forgive all his past crimes if he’ll only leave his con-artist family behind and go straight. But why does going straight feel so crooked?

For one thing, it means being on the opposite side of the law from Lila, the girl he loves. She’s the daughter of a mob boss and, though Cassel is pretty sure she can never love him back, he can’t stop obsessing over her. Which would be bad enough, even if her father wasn’t keeping Cassel’s mother prisoner until she returns the priceless diamond she scammed off him years ago. Too bad she can’t remember where she put it.

The Feds say they need Cassel to get rid of a powerful man who is spinning dangerously out of control. But if they want Cassel to use his unique talent to hurt people, what separates the good guys from the bad ones? With no easy answers and no one he can trust, love might be the most dangerous gamble of all.

What listeners say about Black Heart

Can You Live Long Enough to Make The Big Score?

Holly Black concludes her Curse Workers trilogy with a bang as Cassel Sharpe finds himself playing both sides of the law - doing his best to make sure that he, his friends, and family come out of it alive. Both the mob and the feds want Cassel for the special talent he possesses, and as the story progresses, it gets harder to tell the good guys from the bad guys.

And yet - for a story involving murder, mobsters, con artists, and all other moral shades of gray - it's surprising how incredibly fun this book is.

As much as the cons and the crime, what anchors Black Heart (and the rest of this series) are the characters and their relationships. It's great to see everyone again - Sam and Danica, even when they hate each other, make you feel like you're hanging out with old friends. Lila Zacharov, now working for her father's brand of organized crime, gets to show her ruthless side, and it does not disappoint. The angst between her and Cassel is pitch-perfect - it's never in question whether or not they're in love; what you're not sure of is if it will work - whether or not they're lives are just too different. But Black does an especially excellent job of ratcheting up the complexity of Cassel's relationship to his brother Baron, making Baron one of the most compelling and interesting characters in the series. If Black comes back to these characters and this world, it would be really fascinating to see more of Baron.

Jesse Eisenberg's narration plays it all straight, his voice never giving away who is safe, who is dangerous, and who is conning you. His reading is perfect for these books.

It's a solid ending to an outstanding trilogy. I hope one day we get more Curse Workers books.

What did you love best about Black Heart?

Excellent story, great characters (Cassel for ever!!!) and Jesse's interpretation is perfection.

What other book might you compare Black Heart to and why?

Which character – as performed by Jesse Eisenberg – was your favorite?

Cassel!!!! His voice breaks in all the right moments. He is Cassel in my mind now :) Also, Baron!!! :D He does a great Baron voice :D

Great conclusion to this series

This is the third, and final, book in the Curse Workers series by Black. I think readers who really love this series will enjoy how the series is tied up. Things are tied up in a hopeful, yet realistic way, which I really enjoyed. I personally haven???t been a huge fan of this series, I am not bit on organized crime fantasy, but that being said I think this was the best book in the series.

I listened to this on audiobook and the audiobook was very well done. The narrator sounds exactly like I imagined Cassel would.

Cassel is trying to turn his life around and do the right thing. Sure his ex-girlfriend is forever tied to a life of crime, but Cassel is trying hard to not follow where she is going. Cassel is thinking about working for the Feds because at least they are on the good side right? But when the Feds ask him to do something with his Transformation that he swore never to do, Cassel is forced to question everything. Who is being conned and who is doing the conning? The future of his mother, his brother, and the love of his life, Lila, all depend on him sorting out what???s true and what???s a con.

Cassel just breaks your heart in this book. He is just trying so hard to do what???s right but at points what is right is incredibly hard to figure out. That???s not to say he ever gets stupid; he knows a con when he sees one and is all about conning the person pulling a con.

Lila isn???t in the beginning of the book a ton, but she does feature later on. A lot happens between her and Cassel in this book, and that is all I am going to say about that. Lila is an interesting character; her path to a life of crime doesn???t seem to bother her a ton...it???s just her life and she makes the best of it.

Cassel???s brother Barron and his mother are also in the story quite a bit. Barron is, well, he???s Barron. He???s working for the Feds but still loosing memories. Cassel???s mother is the same; she loves her sons but never seems to struggle with her morals over the decisions she makes.

This whole book is really about the struggle between being good and being bad and how there are no clear answers...everything is just too complicated.

The books ends absolutely perfectly. There are some things left unresolved, just like real life. I love how things are left between Cassel and Lila; the ending just fits the tone of the story perfectly.

Overall a great conclusion to this series. This was my favorite book of the trilogy. It ties things up nicely, has a great tangle of mysteries to engage the reader, and is just absolutely realistic in the way it ends. Fans of the series should be pleased.

Really excellent ending to a fun and fast-paced series. Holly Black outdid herself on this one! Great characters, believable world, entertaining story. Loved every bit!

I love this series. Author Holly Black, and actor Jesse Eisenberg are a perfect match!

loved it, I wish some one would make this series in to movies. please please make at least one movie!!

I love this story

I really love the worlds that Holly Black creates this is with the time I 100% recommend.

I've listened to Jesse Eisenberg read this about four times. He's perfect as Castle Sharp and this third book in the series has all the delight if the first two...and then some. I'm hoping that the few twigs Holly has left behind are enough to light the fire on another book or two. Or three? Thank you, Holly!

A really fun and clever series!

Just a mini-review today for BLACK HEART! I finished Holly Black’s Curse Worker series and really enjoyed it all throughout, but I sat down to write my review for BLACK HEART and found myself at a loss for words! Really, it’s just a bit of a recap of the whole series, a lot of which I said in my RED GLOVE review:

I really love the overall tone of these books! I don’t know if I’d call Cassel and anti-hero but I DO love how he’s not all “good guy”. There are definitely many shades of gray when it comes to doing the morally right thing and what exactly it means to be “right” (Legal? Illegal? Right for his family? Right for his friends? Right for himself?) and I loved that the answer wasn’t always clear!
Magic + mobsters = so much fun. I’m don’t think I’ve read many books with a mobster story line (most crime-family themes have been in passing in the books I’ve read) but this one was fun! I really liked how that played into the entire plot and involved Cassel’s family and therefore ended up pulling him into it.
I really enjoyed the magical elements of this book too! It was interesting that the Curse Workers really got pushed into crime families and it was more organized crime than vigilante justice or individual villains. And that it was hard to identify someone as a Curse Worker unless you witnessed them using their powers or that you were wearing an amulet that broke after they tried to curse you! It was a great take on the concept that really made it more urban fantasy rather than paranormal.
Overall, the series had some really interesting twists that I enjoyed BUT I also thought there was room for a few more twists. I really enjoyed everything from start to finish, though! I constantly loved the feel of the books and couldn’t praise that enough throughout my reads and reviews. The audio was a ton of fun with Jesse Eisenberg narrating and it’s one I’d recommend for a fun, snarky, and a little bit of a dark read!

Brilliant end to the series.

Holly Black can try but she'll never disappoint me. I love the way she writes. Fantastic!