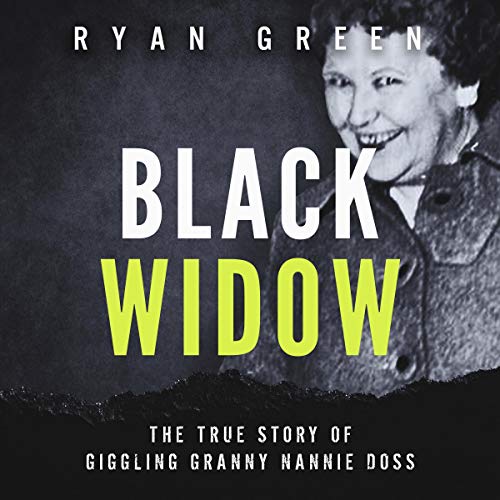 Written by: Ryan Green
Narrated by: Steve White
Try for $0.00

In 1927, Charley Braggs arrived home to find two of his children dead. The doctor who observed the children in their last moments diagnosed food poisoning as the cause. There was no need for an autopsy. His wife, Nannie, blamed tainted grains as the source, but Charley wasn’t convinced.

Charley didn’t feel safe around his wife. In the middle of the night, he took his eldest daughter and ran for his life.

The outpouring of sympathy doubled for Nannie when they discovered her husband’s treachery. To her community, she was a sweet lady renowned for her cheerful disposition. But behind the facade was a much darker and sinister reality. A truth that four of her future husbands, two of her sisters, her mother, her mother-in-law, her nephew and her grandson would perilously discover.

Black Widow is a dramatic and chilling account of one of the most shocking true crime stories in American history. Ryan Green’s riveting narrative draws the listener into the real-live horror experienced by the victims and has all the elements of a classic thriller.

Caution: This book contains descriptive accounts of abuse and violence. If you are especially sensitive to this material, it might be advisable not to listen to this audiobook.

I enjoy listening to these older cases from back in the day when killers were much less savvy in their methods, but almost got away with it! The story moved right along, and the narrator was very pleasant :) I had no idea that Granny could be THIS bold and heartless...yet also have a strong passion for romance novels. Maybe she used passages from the books in her love letters? Lol.

This book was great - not too long or short, and held my interest the whole time. Although I was given this audiobook free in exchange for an honest opinion, I would NOT have regretted spending the credit/money on it. Thank You!

Owner of a lonely heart

Granny wasn't much of a giggler.

Although this is a story about a serial killer, it reads more like a biography than a TC story, it goes down a little dry. I felt it lacked the suspense and excitement I'm used to in a TC. Because I had never heard of Granny Doss before the lead up was interesting. Once into it however, she begins collecting and killing so many lovers they begin to blur into each other. To add to the mundane, the murderous methods employed by Granny were so passive that she almost seems normal. ALMOST I say, because when she starts offing family members just as nonchalantly as she does the lonely lovers, you are reminded of what a heartless sociopath she truly is. This story's lack of intensity however, is not reflective of the authors great writing skills. If you want a titillating "killer granny" story, I would recommend the Dorthea Puente tale "Beneath the Boarding House" by Ryan Green. It has all the gruesome detail and salaciousness this book doesn't.
- I was given a review copy in exchange for my honest review.

To Satisfy the True Crime Lover

For a long time I have watched true crime shows that go into more of the backstory of the victims and perpetrator, but I’ve only recently discovered the book equivalent. I find that I like the older cases more since they are quite a bit removed from memory and the lack of technology at the time was such that more sleuthing was necessary.

The story of Nannie Doss was riveting. I felt it was very well told and the more gruesome parts were not lingered on for shock value, but rather woven together with a great narrative. You felt as if you were peering into the window of an early 20th century family home.

The narration was great as well. Mr. White has a very pleasant voice that provides great inflection. Even though the reader knows what is coming, his voice lulls you into a false sense of security that everything will be just fine.
I would certainly recommend this book to anyone who likes to read or watch true crime. I’m hooked now and can’t wait to read my next one.

I was provided with a free copy of this audio book for my honest review. The views expressed here are entirely my own.

Not at all a thriller or mystery ...rather a dull account of her story wit tabloid touches

The author, Ryan Green, has a talent for writing a true crime thriller that reads more like a novel. Instead of just the cold, hard (and often dry) facts, he takes those facts and creates a very readable story using the facts.

Nannie Doss had a horrific childhood, being raised in a loveless home with an abusive father. When she comes of age, she starts seeking the romance she reads about in her books. The only problem is that Nannie is easily angered and decides to start trying to improve her life through the use of poison. She seeks husbands through the mail in lonely hearts clubs, but each one of them is lacking in their ability to give her the storybook life she desires.

I had never heard of Nannie Doss, but she seems to have been one of the more prolific female serial killers. If you are looking for a strictly factual account of the life of Nannie Doss, this book might not be for you. But, as a good overview of her horrible crimes and what might have led to them, this is a great book.

The narrator, Steve White, has become the voice for Green's books and he does his usual wonderful job. His pacing is perfect and his voice keeps your attention throughout the book. I was given the chance to listen to this audiobook by the author/narrator/publisher and chose to review it.

I received this story for free in exchange for a honest review. If you like true crime that will blow your mind than this is the story for you.👍😎

Black Widow: The True Story of Giggling Granny Nannie Doss, by Ryan Green, was a pretty riveting listen as far as true crime accounts go. Obviously we've all heard of Black Widows-women who murder their husbands, often to profit from them when the marriage doesn't work to their standards. Nannie Doss is all that (she went through several husbands and only one got away with his life,) but on top of that, she murdered two of her own children and two of her grandchildren. The murder of the one grandchild right after her daughter gave birth was especially horrific IMO. I listened to this story in one day of running around and it kept my attention the entire time. Now, Nannie did have a terrible childhood-one that no child should ever have to go through, with a "father" that was a real piece of work and a mother that it seemed could only do so much. Not that that excuses anything. Nannie really didn't have much of a chance early on and who knows if it was her injury or something else that made her into the minster that she became. If you're a true crime fan and want to listen to something a little out of the typical, often male dominated serial killer realm, I'd definitely recommend listening to this horrific tale of Nannie Doss and her crimes.

Steve White did a good job narrating this tale. Especially with true crime accounts, I don't expect a narrator to really "perform" the various characters. This was read more as a factual account and I think it suited the story just fine. I'd definitely listen to more true crime novels narrated by Mr. White in the future. I was voluntarily provided this free review copy audiobook by the author, narrator, or publisher for an honest review.

Did you find this review helpful? If so, would you please take a moment and select the 'helpful' button below? Thanks so much!

I received a free audiobook copy in exchange for an honest review.

Ryan Green does a great job in the research and detail in his true crime books. This one is no exception. This one walks through Nannie's life and her murders. I really do like his writing style and Steve White's narrations for Ryan Green's true crime books is very well done.

I was given this free review copy audiobook by the author, narrator, or publisher courtesy of Audiobook Boom at my request and have voluntarily left this review.

I cannot believe how short this book was compared to how much I learned about Nannie Doss and her life! She sure had a rough childhood with an abusive step-father. Her marriages were all pretty crappy overall too. I almost felt sorry for her. The craziest part is how she could fool people into thinking she was an innocent victim in everything that happened to her. I am a very empathetic person, but I cannot fathom her reasoning behind killing all the people she killed, especially her own children and grandchildren.
Ryan Green made Nannie come alive to me. He had so much background and the material is thought provoking. I felt like I was in the kitchen with Nannie and I was scared! Thank you very much, Ryan, for the opportunity to read and review this book. I will definitely be looking for more of your work!
Steve White have a very nice voice for narration. I listened to this in one sitting – I did not want it to end.