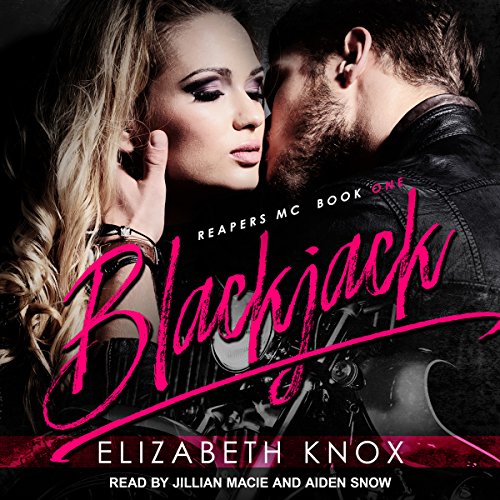 With marriage, there are things you can and can't live with. Harry, my abusive husband, made that clear enough when he beat me like a dog, forced a miscarriage on me, and tried posing me as a hostage to my father's notorious biker gang, The Reapers. I was lucky enough to get out of my marriage in one piece but it's only a matter of time before he picks up my trail and hunts me down.

Blackjack swears he'll kill him the second he steps foot in town. I know he means well but there's something about his stare when he tells me I deserve better. A part of me wants to believe I deserve someone like him and yet my bruises are telling me never to trust another man again. But Blackjack isn't like any other man. Is he?

When I enlisted into the army, I didn't think I'd have anything or anyone to lose - except for her. Ashley Monroe, the blond wild-child of Montana's Reapers MC. It shouldn't have been a surprise when I came back home years later to find out that she left town and ended up married. Life went on of course, and I was fortunate enough to have Dex, a son of my own.

Three years later, Ashley came back beaten and broken from her marriage. I've never wanted to kill a man so bad in my entire life. Just one look at her, and I'm drowning with the urge to hold her in my arms and tell her that she's safe with me, truly. Sometimes I wonder if there's still enough strength in both of us for a second shot in life.

What listeners say about Blackjack

I really enjoyed this softer, less rancher style of MC story. it gives a better view of how not all men in MCs treat women like trash and can man up to their true feelings.

I like this story can't wait to read the other story's in this mc series.

Boring not well thought out plot

Must be a new writer. So many things wrong with this book. Heroine had such strong family ties but yet she did not speak with her family for years until she needed them. The writing was all over the place I couldn’t keep up. Female narrator was annoying. Anyway, I’ll pass on the next one.

The few things I didn't like had to do with the MC world itself. Not to say I'm an expert, but from all of the other MC books I read, no female was ever involved in Church or anything else up front. behind the scenes yes, sure or if they were invited for a specific reason but this chic was so involved I thought she was a patched member. One minute shes a bad ass the next she's not. it was an okay story for me.

descriptive when not needed no personality in narration,story lacks excitement. Original Reapers MC is Better.

🌻I enjoyed this listen!🌻

Although this wasn’t nearly the best MC romance I’d ever heard, I did enjoy it. There were scenes of brutal spousal abuse, in the beginning, but the rest of the book was a feel good 2nd chance romance. Blackjack, the Hero, and Ashley have had strong feelings for each other for years. However, Blackjack was 14 years her senior, therefore, their live was forbidden. Trying to do the right thing, Blackjack enlists and is out of Ashley’s life for years. When horrific circumstances bring them back together, they finally get their chance to explore the love between them.

I was very disappointed in this story. The sample made me want to try it out, but having gotten the book, it was hard to get through the story without wanting to skip through - which I ended up doing until the end.

The writing style needs a major overhaul. Now I have to say, I regret buying this book. Oh, the 2 star for the Performance was only because of the male narrator. ☹️

Well it has its moments

When I listened to the sample of this story I was super excited.. finally an action packed MC story but then it’s not really a true MC Biker club or should I say what I consider. The female character was all over the place.. one minute she was this BAD ASS chick that was super smart then the next she was dingy and Naive drove me crazy. The female narrator wasn’t the worst but her voice kinda got on my nerves too or maybe combination of the characters.. Aiden Snow is Awesome also a women would never be able to attend church or know club business nor the children.. right when I was fed up with it all finally action toward the end and made it worth it plus the plot of the next story about the cousin.. oh and I love the house in the story too. Not many bikers have homes like that but awesome 😎

Honestly the only reason I purchased this is because Cody Smith aka Comedic Cody is on one of the later covers and I figured if I was going to try and read this, I might as well start at the beginning. This was NOT written well. It felt like the author watched SOA and had an idea to write a romance novel. And my lord, how many times is this grown woman going to call her dad, Daddy...., it was a little annoying. I felt like I was listening to that My Daddy meme.

Loved it !! this story. the narrator is so fantastic it's like your really there!! After listening to this story,. I totally enjoyed reading this book. It’s well written and the characters were uniquely fantastic. I would suggest this book to my friends that like this sort of genera. this was a good book. The narrator was great.

I’ve read this book a couple of times because I love Elizabeth Knox‘s books. But let me just say, hearing it is so much better. Jillian Macie and Aiden Snow absolutely brought these complex but beautiful characters to life. I loved it.

Good listen!! Love both the narrators!!

Quick listen but keeps you very interested. Love that it’s an age gap too