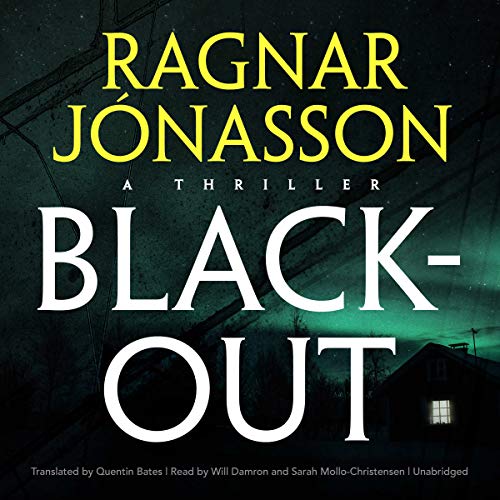 A huge best seller in England, France, and Australia, this is the third book in the Dark Iceland series from a spectacular new crime writer.

On the shores of a tranquil fjord in northern Iceland, a man is brutally beaten to death on a bright summer's night. As the 24-hour light of the arctic summer is transformed into darkness by an ash cloud from a recent volcanic eruption, a young reporter leaves Reykajvik to investigate on her own, unaware that an innocent person's life hangs in the balance. Ari Thor Arason and his colleagues on the tiny police force in Siglufjordur struggle with an increasingly perplexing case, while their own serious personal problems push them to the limit. What secrets does the dead man harbor, and what is the young reporter hiding? As silent, unspoken horrors from the past threaten them all, and the darkness deepens, it's a race against time to find the killer before someone else dies.

Dark, terrifying, and complex, Blackout is an exceptional, atmospheric thriller from one of Iceland's finest crime writers. A 2016 London Guardian Best Book of the Year in Readers' Picks.

What listeners say about Blackout

having it read makes the iceland names so much better. can't wait for book 4

This is an awful book. I pre-ordered it, and was looking forward to it's release. I have read the previous books in this series, and they were all pretty good. This one is not. The characters get more and more unlikable. The story line is full of absurd coincidences, impossible conclusions, and pointless meandering. I kept reading, hoping it would all come together and get better, but it did not. Several plot lines, none of which were developed enough, or tied together with the others. Shouldn't have wasted the time. Take a pass on this book.

I have now read books one thru three in this series by Ragnar Jónasson. I’ve enjoyed all three, but they are in the wrong order. This book should be number two and Nightblind third. Events in this book occur before things happening in Nightblind. I waited for it to be some kind of flashback, but there never was. Not great literature, but interesting main character

I understand not everyone speaks a certain language. But this series is set in Iceland, with traditional names and locations/towns. Couldn’t they get a Scandinavian person who can say names & locations correctly. It’s extremely distracting

I really enjoyed this book and the fact that things came together organically with out forced twists and turns to throw me off.

The characters were well developed and more than one secret put together several story points.

Will Dalton is always a fantastic narrator. I enjoyed listening to Sarah for the first time.

Les than you pay for

This free book is a textbook example of getting less than you pay for. Trite story, stick figure characters, sententious narration.