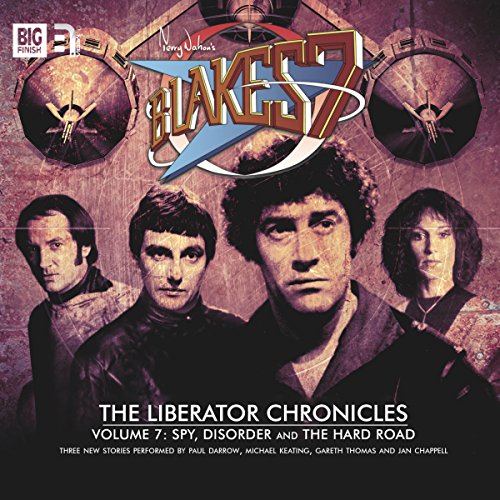 Three enhanced audiobooks performed by the stars of the classic BBC television series.

Spy, by Simon Guerrier. Starring Jan Chappell as Cally, Michael Keating as Vila and Gemma Whelan as Arta.
Cally and Vila are undercover on the Federation-controlled world Cortol Four. It's a mission with an irresistible prize. And it's a mission that goes horribly wrong....

Disorder, by Eddie Robson. Starring Michael Keating as Vila and Paul Darrow as Avon.
Division Three. A space station in the process of being decommissioned. Its archives contain key records of the Federation's enemies - and Vila and Avon intend to steal it.

The Hard Road, by James Swallow. Starring Gareth Thomas as Blake and Andrew Whipp as Trel Dekkan.
Blake decides it is time to fight back against the Federation - and to fight back with allies.

What listeners say about Blake's 7 - The Liberator Chronicles, Volume 7