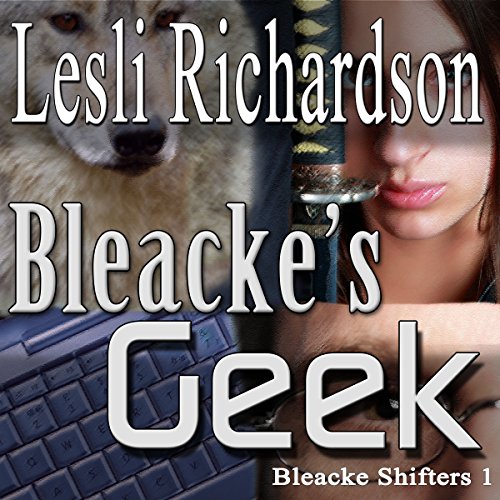 Written by: Lesli Richardson
Narrated by: Audrey Lusk
Try for $0.00

Dewi Bleacke is a no-nonsense Prime Alpha wolf. As head Enforcer of the Targhee pack, she's in charge of Florida. Her assignment is to kill a dirtbag who sold his daughter. She doesn't expect to find her handsome, albeit geeky, soulmate in the process.

Dr. Heathcliff McKenzie Ethelbert lives a quiet, boring life. A professor at USF, he has no girlfriend, no car, and is a devout vegetarian. So when a mysterious woman with mocha eyes literally drags him out of his booth and then proceeds to have her way with him, it's not his average night out. When she follows their sexy interlude by abducting him after killing a man, he suspects life has just taken a drastically odd turn.

Now Dewi, her partner Beck, and her surrogate father Badger, have to educate her new 'grazer' mate on the ways of the Targhee wolves. 'Ken' does his best to fit in. But an old killer lurks in the shadows - the wolf who murdered Dewi's parents. Can she keep Ken safe, or will her mate prove to everyone that he's a lot more than just Dewi Bleacke's geek?

Beauty and the Geek..

Dewi finds her soul mate while on an "assignment", she completes the job, has her wicked way with her new mate and then, she kidnaps him!

This book had Suspense, Action and Romance all rolled into one story line, making it an overall entertaining read.


Audrey Lusk did a good job with the narration.

INteresting, but there were issues along the way

I really wanted to love this read, it had such promise and engaging storytelling. The issues I had with it were more pace and personal preference.

The lead, Dewi, is kind of a bad a$$ chick, and a touch of a dome in the bedroom. Not full on, but she is in control most of the time. I prefer the man to be the Alpha, but that is my preference. Ken is more mild mannered than I am into, he does butch up a bit, but not enough to make me tingle. I will say they are very well suited and you can see why they are a match.

The story here is very slowly paced. There is so much time spent on day to day mundane activities. That could have been condensed and more action added. The big conflict was no huge surprise when it happened. I felt like the foreshadowing was rather heavy handed.

On the upside, the book was very interesting, even the mundane parts held my attention. I love the dynamic of the little family Dewi has going on and the way Ken fits into it so well. It was fun reading those scenes and Badger made my heart happy!

Audrey Lusk is always a delight to listen to, especially on the naughty reads! She has this husky quality to her voice that works oh so well for the smexy bits! Her voice is great for men and women alike, not an easy task! I have listened to many books from her and keep coming back for more!! She gives happy ears every time!

Overall, this was an entertaining read, even if not my typical preference for characters. Without giving any spoilers, I will say that the end result in the relationship made me very happy!! I am hoping this is a series and we will see more of this pack!

Idea of story line had potential...

Unable to finish story related to the voice of main character. Uncertain if it is related to story line or interpretation/narration.

Would you be willing to try another one of Audrey Lusk’s performances?

Unable to finish story related to the voice narrator used for main character.

First time I am leaving a negative comment/review.

What a fun listen

This was a very enjoyable paranormal story. We have a female prime alpha on her way to take care of a problem who meets her human male mate. What to do? This is the total reverse of the usual paranormal story with the female as powerful and the male geek needing help. She's rich, he's poor. Just loved it. Audrey Lusk does a very good job of naration.