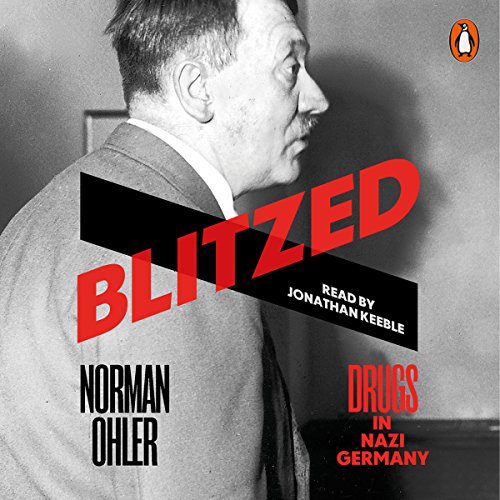 The Nazis presented themselves as warriors against moral degeneracy. Yet, as Norman Ohler's gripping best seller reveals, the entire Third Reich was permeated with drugs: cocaine, heroin, morphine and, most of all, methamphetamines, or crystal meth, used by everyone from factory workers to housewives, and crucial to troops; resilience - even partly explaining German victory in 1940.

The promiscuous use of drugs at the very highest levels also impaired and confused decision-making, with Hitler and his entourage taking refuge in potentially lethal cocktails of stimulants administered by the physician Dr Morell as the war turned against Germany. While drugs cannot on their own explain the events of the Second World War or its outcome, Ohler shows, they change our understanding of it. Blitzed forms a crucial missing piece of the story.

What listeners say about Blitzed

So much Information about a crazy crazy time.
Still in disbelief about how many pills were actually consumed. Whoa

Great info from behind the scenes

I had no idea the amount of drugs used by Hitler and his cronies during the Second World War. Great book I highly recommend it.

A new take on history

Extremely interesting and detailed story, but the voice acting leaves a bit to be desired, often coming across as flat and lifeless

An incredible look into the substance use (and abuse) of the German military in WW2, including Hitler himself.

Interesting hidden side of WWII history

Very interesting and compelling study of how drug use in Nazi germany impacted the outcome of the war. A hidden side of history we definitely didn’t learn about at school...
Some of the points (particularly the downfall off Hitler) are a bit laboured, less objective, and a bit more grotesque than the story probably needed.
Overall a great listen, and recommended.

I believe my thoughts are now in agreement that suicide is believable and not that the top SS/Nazis ended up in Argentina after reading this book.

This book gives a crazy perspective on a country high on drugs during wartime!
Amazing story and well researched.

Shocking!!! A must read

What else do we not know about this era ? Drug driven frenzy and destruction .
And history heading towards a repeat.

Loved it. If you think you know a lot about WWII, this will throw a new twist on the motives of the past.

Very interesting story about drug use in Nazi Germany. It would be nice to have more statistics about the actual number of German civilians and soldiers using drugs.

One Reich, One God, One Dealer

This is a fascinating rollercoaster ride through the history of third Reich seen through the prism of substance abuse. The premise that the German people, especially their fighting forces, ran on massive amounts of Crystal Meth and Hitler was addicted to Hill Billy Heroin was shocking, but makes perfect sense. How else could Hitler’s armies roll up Europe like a cheap rug in just a matter of days? The work seems well researched and is extremely well performed by Johnathan Keeble. The events it documents are both fascinating and horrifying by turn. I’m a fairly keen WWII reader but this told several tales which I hadn't heard before. I’d heard that Hitler had a serious problem with substances which I always found odd because he was famously keen on health and fitness. The book explains this transition from extreme vegan to severe doper in great detail.

If I have any qualms about the narrative it feels like the author may be over playing his hand, just a touch. He goes in for quite a bit of speculative thinking extending his already startling and well documented theory beyond firm facts. Attributing Hitler’s decline in sanity and health primarily to substance abuse is fascinating but it may be joining up dots which are not really be there. Regardless, this is a marvelous, compelling read. If you have any interest whatsoever in WWII its causes and impact on our world, you will find this an extremely satisfying read.

Holy Guacamole! This audiobook is a blast. Even if you have read more Third Reich books than is good for normal functioning, get this one.

I've rarely have had as much fun learning than I have has listening to this audiobook. The subject is new, it's fascinating, and it keeps you listening. I listened to it almost at one go. While it covers the subjects of drugs in the Third Reich, it's something of a drug itself--very hard to quit.

As a pharmacological history of the Third Reich and a pharmacological biography of Hitler this book can not be beat. It sheds an entirely new light on Hitler and his enabler/pusher Dr. Morel. It also sheds light on how the Wehrmacht can be understood as a Walter White experience gone horribly off the rails.

Thanks to this new understanding we have a understanding on how Hitler was able to power thought the war sustained on junk (both literal and figurative) The number and amount of items Hitler had pushed into his veins by the good Doctor Morel is amply and chillingly documented. The rise and fall of both Hitler and his Reich is plotted with excruciating detail on medical charts and on prescription notes. What a strange, long and ultimately disastrous trip it was.

Really liked the content, it opened a whole new perspective on the third Reich. In terms of performance I only wish the reader would have taken the time to research the basics of correct German pronunciation. The way he butchered German names and expression was neither English nor German and just horrible. As a fluent speaker of German I feel it wouldn't have been to much to ask for to do a little research. Other than that the performance was alright.

This is a gripping historical narrative, offering an unusual perspective on Hitler and the Nazis. It develops a fascinating argument -- that amphetamines and pharmaceuticals were a significant factor in the history of the Second World War. While this is not an *entirely* new argument -- I read a history of amphetamines a few years ago called _On Speed_ that made similar suggestions -- Blitzed caught the pass and ran with it all the way into the end zone for the touchdown. Rooted in scholarship, but very fun to listen to, and well performed by the audio reader. Excellent!

An eye opening account of the endemic use of drugs in the Third Reich: both amongst the Nazi elite and the fighting men for whom meth amphetamine was an essential element in their early successes, especially the invasion of France.

Would you consider the audio edition of Blitzed to be better than the print version?

I love the narrator! He's definitely been given some acting instruction by a very good teacher!

My favorite character? Am I allowed to say Hitler? Theodor Morrell is great, but he simply isn't as significant. Perhaps the drugs themselves?

What does Jonathan Keeble bring to the story that you wouldn’t experience if you just read the book?

This is one of the most interesting books I've ever read or heard. It's a must-read for any WWII enthusiast.

Hitler's drug use has been long known. You can go all the way back to Trever-Roper for Morell's use of "28 substances." Nevertheless, conventional historians have discounted the impact this would obviously have had. The question is only a matter of degree. Unfortunately Ohler, a dreaded non professional historian, overplays his hand with the melodramatic flair, and will be discounted by the mainstream just like the reports of Hitler's doctor, as a quack!

The Third Reich Just Got Weirder

Normally this book would not get five stars from me but it is such an idiosyncratic work I must recommend it. I am not a WWII sort of guy but I have listened to all 57 hours of The Rise and Fall of the Third Reich by Shirer so am not a complete novice.

The first part of the book seemed slow going but then I learned the blitzkrieg into France was organized, more or less, out of a desperate Chinese Fire Drill and was made successful by nearly a complete accident of insubordination. And perhaps enabled (or perhaps entirely enabled) by prodigious distribution of methamphetamines. These guys needed to keep awake for something 48 hours straight just to get started.

In addition I did not realize till the book was done that it is a translation! That is a recommendation by itself as something of a natural curiosity. From time to time I caught myself thinking, in the bck of my mind, (pst! Fredrico Felini! ). I will leave the fact checking to others but there simply are a lot of reasonably plausible weird things that any armchair strategist would be delighted to take up in late night beer fest.

Finally, the general theme seems to include an accusation Hitler's personal physician was such a total quack Hitler was lucky to have lived into 1942. What I find amazing is this guys quackery must have worked rather well because otherwise Hitler could be mistaken for a German Rasputin rising from the dead every three or four months till he finally had to do the job himself with a small calibre Walter pistol.

Fantastically interesting book. I listened to it pretty much in one go. Could not put it down. This sheds an entirely new light onto historical events, not least the supposed invincibility of the German army in the early stages of the war.

Fascinating, absorbing listen. I have been telling everyone I know about the findings/revelations in this book. Totally recommended, plus top-notch narration.

some of history never told

very interesting book about a dark part of history never told in school. must listen