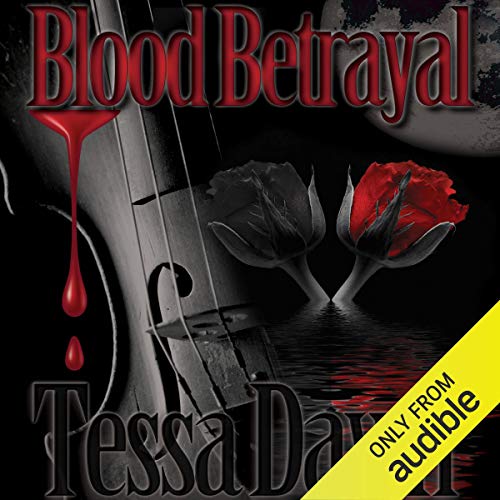 Saxson Olaru is one of the select, the few, the elite....

As a ruthless sentinel sworn to protect the ancient Vampyr king and the house of Jadon, he has "HOJ" literally inscribed on his heart: a heart that was tragically broken centuries earlier, when human hunters slayed his mother and Dark Ones murdered his father. Having survived the unthinkable, he never dreamed he would come this close to another human predator, let alone a female pretending to be his destiny.

Kiera and Kyla Sparrow are twin sisters: humans, living very different lives. While Kiera is selfless, clever, and talented, Kyla is dark, duplicitous, and damaged - she belongs to a secret society of vampire-hunters, and she has sworn to destroy as many as she can.

When Saxson's Blood Moon appears in a February sky, and the matching constellation, Cetus the Sea Monster, appears on Kiera's wrist, Kyla knows exactly what it means: The celestial gods have chosen her beautiful sister to be the eternal mate of an immortal vampire - she just doesn't know which one.

And it really doesn't matter.

If Kyla can recreate the sacred emblem on her own inner wrist, she can take Kiera's place and commit the ultimate Blood Betrayal.

When duty, obedience, and honor clash with a deep, gnawing intuition, an honor-bound warrior will be forced to choose between allegiance to the house he loves and the quiet voice within, whispering: "Warning!"

And all will be lost forever.

What listeners say about Blood Betrayal

A million times yes. I've loved Tessa Dawn's books since the moment I picked up Blood Destiny. But this story, it blew them all out of the water.

Without giving away anything, there was some serious beautiful violin playing, and well, everything with Braden. He really grew into himself this story.

I really don't want to give anything away, but Braden. My goodness. He had me crying like a baby.

I would definitely suggest every one of Tessa Dawn's books to anyone who likes a darker supernatural series. If you're looking for a lot of mindless sex scenes and PG battle scenes, this is not your series. But if you're into well developed characters, a forever twisting plot, and just one hell of a story, you've found the right series.

Once again Tessa has create another masterpiece that i could not put down! It grabbed me from the first chapter & i couldn't stop listening! Reading this series has been my escape time where i can only focus on the mystery of the blood curse. Thank you Tessa for giving me one of my most favorite series to slip away from the drama of real life and look forward to the next book to sink myself into. I have read the books, listen to the Audibles over and over and it's like reading/listening it for the first time. I recommend to anyone that has not read the series, jump in and you will never want to stop! I have both Audibles & books! reward yourself getting all, you will be excited as i am when i hear she has written another book and waiting for it to be delivered!

Tessa Dawn and Eric G Dove have nailed another great one! The plot thickens and the bad guys are bad!!! You can't go wrong with this thriller!

If you could sum up Blood Betrayal in three words, what would they be?

Pure magical synergy!!It is rare when both an author and a narrator can draw you into a world, bring it to life in fullliving color, and hold you there on the edge of your seat. Cringing. Gasping. Wanting more and more. The characters are 3 dimensional and seem so real. The scenes are stunning. And the story belongs on a big screen in Hollywood, although I wonder if any movie director could bring all this tension, beauty and surprise to life! Hats off to both Eric and Tessa - pure magical synergy.

Absolutely! I recommend the entire series. The books build on each other, the characters are fantastic and the story line is engaging.

I love them all but, my oh my that Saxson had me at hello!

What does Eric G. Dove bring to the story that you wouldn’t experience if you just read the book?

Eric is dynamic as the voice of Saxson. The dimension he gives all the characters is wonderful, he can bring you right into the story and hold you there.

I cried, cringed, laughed and screamed in fury. It has it all, the relationships are incredible so I felt the emotions of all of the characters. Bring your Kleenex and prepare to have your jaw hang open a few times.

Don't skip this book, it's everything you've come to expect from a Tessa Dawn book and more. She ventures into places that you would not think of and it leaves you wanting more. Brilliant!

Tessa is one of my favorite authors! The entire series is awesome. thank you to the GODS for your imagination! Can't wait for the next one

Would you listen to Blood Betrayal again? Why?

Absolutely! Eric Dove’s narration conveyed the tone and intensity of “Blood Betrayal” in an all-consuming way. I felt I was “in” the story – and as such, experienced fear, passion, uncertainty, beauty, darkness – all the emotions Dawn’s characters experienced.

All! Each scene felt like a symphony; the ebb and flow of the tide as expressed in literary passages. One moment, filled with angst, the next, filled with beauty. Dawn played her characters succinctly and, coupled with rich imagery, makes for a compelling, and inspiring listen.

It was! I had a hard time pressing “STOP” because I became “part” of the story. Without me having to read the words, turn the pages, etc. I was easier absorbed by Dawn’s tale. The narration, being as it was, morphed Dove himself into each personality. Fascinating...

Written in Dawn’s breathtaking style, complete with rich imagery and stirring passages, “Blood Betrayal” was a wildly raw ride. With an exceptional author like Dawn, my practice is to read the e-book, then listen to the audio version. It’s much-appreciated (and a nod to the author) to want to enjoy a book in multiple forms. And, with all of Dawn’s books, I found myself doing just that in this latest installment.

What did you love best about Blood Betrayal?

The whole book. There was nothing that I didn't like.

What other book might you compare Blood Betrayal to and why?

J. R. Wards "Black Dagger Brotherhood". This series is about vampires finding their mates and protecting the world from evil.

When Saxson finds Kiera and saves her.

Knowing that Kiera had a sister who turned on her.

This whole series is great. I would recommend it to anyone who likes vampires and wants to read something different in the vampire genre.

I just love these bools. I can not wait for the next book. I'll have to listen to the whole series again...love it

love love it. so hope she brings in more vampires for more to continue series