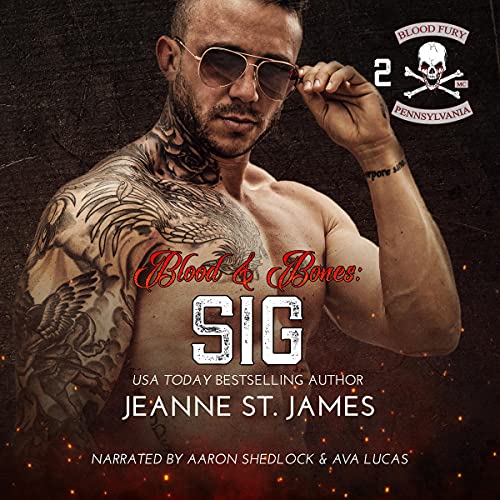 Revenge isn’t always sweet, but it sure can be satisfying...

Sig never wanted to return to Manning Grove since it didn’t hold any good memories. Growing up a part of the Blood Fury MC ended up being a disaster and screwed up his life, which led to him spending most of it in and out of jail. But now he’s not only back, he’s sitting at the table as VP next to Trip, his half-brother who has resurrected the MC from the ashes.

Still bitter about what went down 20 years ago, he’s now trying to move past it and stay out of jail for good. Until he finds a beaten and abused woman running through the woods, trying to escape her captors. Now all he can think about is revenge on the Shirley Clan, a group of sovereign citizens who follow no laws but their own. And if he isn’t careful, he might end up right back where he vowed to never go again. Behind bars.

Note: Blood & Bones: Sig is the second book in the Blood Fury MC series. As always, it has no cheating, no cliff-hanger, and has an HEA. It’s recommended to listen to this series in order.

Oh my stars. What a raw and gritty books Blood & Bones: Sig was. We first met Sig in his brother’s book,Trip and I was interested to see what Ms.St James had in store for him and the woman who would entice him to settle down.
The performance by Ava Lucas and Aaron Shedlock was spot on and they most certainly did justice to the story. I loved how protective Sig was of Red, the woman he finds naked, beaten and abused running though the woods. When he learns of the horror that is her recent past, he knows that he must do everything in his power to protect her from her abusers.
This was a rare, gritty, at times over powering, emotional story that got to me.The friendship that blossoms between them is real as Sig does all he can to support Red during her pregnancy. Both Aaron Shedlock and Ava Lucas brought all that to life for me with their performances.
Sig is such a tormented man and it was wonderful to see how is willingness to help Red also brought abut the beginning of his own healing. I also enjoyed the progression of his relationship with his brother Trip.
I cannot wait for the next book in the series.

This book fell flat. By chapter 10 you would expect the characters to have developed more and not been so Doom and Gloom all the time and focus on the past. However the story just keeps on droning on and the characters don't seem to get anywhere until close to the end where romance finally supposedly comes in. But by the time any romance shows up it's not really felt within the characters. It just lays flat on the page. And then in the epilogue is when some sexy time finally happens but it just lays flat even then.

Every book Jeanne St James writes is special. There is always an incredible bond between the hero and the heroine, and it's impossible not to root for them. This book in particular is has won my heart. Not the typical story, but this series is a little different as the Blood Fury comes back to life. Sig is fascinating to me. The half brother of Trip, he has been made vice prez, and has no intention of staying around. He just wants what is his from his father and to move on. That is until he picks up Red. Red is a mess. Pregnant, naked, undernourished, she is need of care, and Sig takes her home to give her everything she needs. But what is truly amazing is this tough, broken man and damaged, closed up woman truly see each other. This is dark and gritty with a slow burn romance just waiting to explode. Plus, I absolutely love the story line. There are some crazy people out there and to get to see it through these eyes is exciting. It's thrilling to watch the MC begin to gel and fun to get to know some of the new characters. It makes me want to listen to more!

Nothing could have made this story better except the narration, and it just brings the story to a whole new level. Aaron Shedlock is Sig, and he gets him. Broken and broody, compassionate and loving, dark and light, he reaches into Sig and brings him everything. Ava Lucas has a tough one, with the closed up Red. She is uses her talent going from the quiet, aloof feel and lets us feel her change and warm up as time goes on. It's a fabulous team and together made this one of my top listens this year.

Slow... very very slow. I like Sig, reminds me of every other character in a book, movie or real life that didn't ask for a bad childhood but has to pull him self out of it. Autumn is OK. But darn if this book didn't make me want to yell and throw up and cry. But not in a good way. There was no flow and no build up. And coming right off Trips book...Trip was an a$$.

Story line was a lot better

The story line was a lot better in 2 than in 1 the characters were much more interesting , the only down fall was that the main hero said FUCK waaaaaay too much lol just drove me crazy.

This one is dark. Sig had plenty of issues going into this story. Red had her own issues and was in a bad place and some denial regarding her situation. I love these 2 together. Their HEA was hard won. The narrators did a wonderful job bringing this story to life.

The second book in the Blood Fury MC series and I loved it. Sig and Autumn definitely take you a rollercoaster ride of emotions. The storyline and characters were well written. Aaron Shedlock and Ava Lucas did amazing with these characters.

It always has to be Aaron Shedlock...

The harder the man, the sweeter and harder they fall. I have every single audio book that JSJ has out. Absolutely loved this story. Aaron Shedlock is hands down one of my favorite male narrators, especially MC and Alpha male centric books. That voice. Could make the coldest person melt! This is a perfect example of how the combination of author/story/narration come together to make it a spectacular listen!!

5 Stars isn't possibly enough for this incredible story!" Blood & Bones: Sig" is Sig and Red's (Autumn) journey this is a story of a broken man who is dealing with demons of his youth, he is the Vice president of Blood Fury MC a club he grew up in which had died years ago from tragic violent fate brothers turned on brothers with betrayal and murder. Sigs half brother Trip had resurrected the club and was trying to do it right this time unlike their parents in the past . Sig was broken and struggling then one day on the side of a road he saw a woman running for her life she was naked, abused, looked starved and appeared to be pregnant she was terrified and running from a horror that had just about destroyed her and Sig tried to help her but she was so scared she almost didn't take his hand but she did. Sig had to protect her from people who wanted her and what she had and they together broken and surviving tragic pasts started healing while fighting to overcome danger . This story is deep and very emotional. I cried for the characters I cried for their sadness and cried in joy. This story is so incredibly good I couldn't stop listening from beginning to end. I don't remember when a story touched my heart like this one did so Bravo to Jeanne ST James you are a Rock Star of Authors. The narrators Ava Lucas and Aaron Sherlock performed this with perfection I loved their narration. One final note this story is one you can't stop thinking about once you finish it is a must have!!!