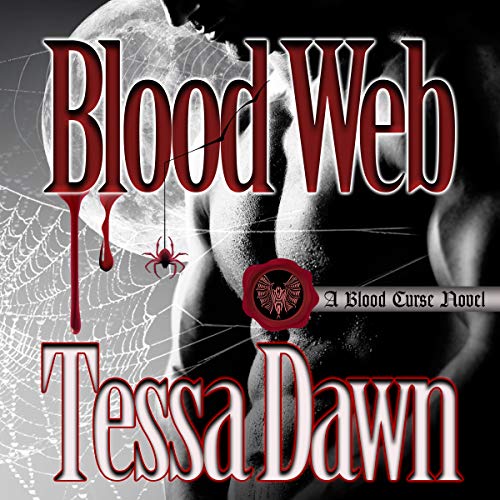 She knew she was flirting with danger, but she never meant to let the spider in....

Santos Olaru is a seasoned vampire-warrior and an unforgiving mercenary who protects the descendants of Jadon against all enemies, preternatural or human. He is also a whiz with technology and computers - a virtual ghost in any machine - who uses his unique set of talents to make problems disappear. Until now, Natalia Giovanni has flown beneath his radar, even though she has been following him through cyberspace for years....

As the only child of a billionaire whose criminal empire spans human trafficking, generational slavery, and forced prostitution, the beautiful human female has been a prisoner all her life: She has been sheltered, threatened, and exploited by her father to make his dark, seedy business appear legitimate. Unbeknownst to Natalia and her father, she has also been promised in marriage to a brutal vampire: a Dark One in the house of Jaegar who intends to use the stunning brunette to breed a son - and a sacrifice - for a soulless colony.

When Natalia hacks into Santos' computer and places an end-around chat box on the warrior's screen, she unwittingly spins a sticky web...and invites the spider in.

A powerful curse is set into motion; a primordial hourglass bleeds sand; and an ancient Blood Moon beckons two unlikely players to a deadly game of love and chance. Discover the "extraordinary storytelling talents" (Midwest Book Review) of Tessa Dawn in this chilling, vampire dark fantasy.

What listeners say about Blood Web: A Blood Curse Novel

The most thrilling book in the Blood Curse series

Tessa and Eric do it again! Blood Web was exhilarating! My only disappointment is that Eric couldn't read faster to get through the unexpected twists and turns. This book will definitely be high in my listening rotation list.

Had me on the edge of my seat

I literally had to stop a few times and remind myself to breathe during this story. Another amazing tale written by Tessa Dawn and brought to life by Eric Dove. This book is full of action, suspense, mystery, action, heart breaking and heart warming moments and some serious sexy on the side. If you are a fan of the Blood Curse Series you NEED this in your library.
And the ending??? WOW!! Can't wait for the next one, I think I will listen to this one again.

Book 10 of the Blood Curse series and now I have to wait forever for number 11. Jeez, I love this series.

This one was about Santos and Natalia, and what a story it was. Natalia’s father was some kind of evilness. He had a Fortress where he kept women for sale, and he kept them for years and years. He even had some of the women get pregnant, have the child, then raise the kid in the Fortress so he could sell them too. Holy crap! Eventually, the Fortress was broken into by the Dark Ones and 30-something of the women were killed and 40-something were saved. That’s a lot of women and children held captive. The A-hole Luca made a ton of money for them.

His daughter Natalia was just as much a prisoner as the women and if Santos hadn’t saved her and “turned” her when he did she would have died at her “fiancé’s” hands. Wow, Oskar Vadovsky (a Dark One) was brutal.

It was nice “seeing” all the others again, his twin brothers Ramsey and Saxson, Nachari, Marquis, Kegan, etc. They’re always so exciting and brave and blood-thirsty.

There was one explicit sex scene and the F-bomb was used 15 times.

As for the narration: As always Eric G. Dove was awesome. His women’s voices are great but his men’s voices are spectacular. Each and every one with their own distinctly special voices.

Not as good as some of the earlier books, but entertaining

The minute I see that a new Blood Curse novel is released, it’s an auto download. I wish they were released faster but alas, it’s not up to me.
As always, the narration of Eric G Dove was flawless. In my opinion, he is one of the greats like Jim Frangione and Sebastian York. He does an Alpha Male, with the best of them.
The plot itself wasn’t as exciting, as some of the other books. For one thing, we didn’t get to check in with some of my favorite characters.
In addition, the relationship between the Hero and Heroine wasn’t as intense as the previous books. Maybe it is just me, but I wasn’t drawn into this book like I was some of the others.
As with all the books, in this series, the last chapter of this book ends up being a preview of the next book. The next book coming up seems like it’s going to be pretty exciting; I can’t wait. I’m going to the Author’s Website, right now, to see how long I have to wait for the next book of this series. Enjoy!
-V from Kansas

Dawn’s raw and emotive storytelling artfully combine deceit, passion, danger and destiny. Her paintbrush is the spoken word, where the listener is taken on a meaningful journey, one which lingers long after the last word is spoken. At various points, I had to stop listening, just to marvel at the brilliance of her narrative.

The entire series to-date, starting with ‘Blood Destiny’ is a rare find, and I am grateful to have found such a gifted author. Thanks, Tessa!

Blood Web may just be the best book in this series yet. It was gritty, fast-paced, and so unpredictable. I loved every minute of this wild ride!

Captivating in every sense of the word!

Blood Web is book #10 of the Blood Curse series. Wonderfully narrated by Eric G. Dove. This book is captivating in every sense of the word. The Author Tessa Dawn spins a web so tightly that you will not be able to escape its sticky tendrils. Entwined with gut wrenching, in depth descriptions of fierce battles, rugged and utterly dangerous Vampire Warriors, Sentinels and Wizards and an untamable desire that will not be suppressed. The world wide web has never been more exposed and there is nowhere for his Destiny, his chosen mate to hide. This incredibly talented, dangerous and savagely handsome Vampire will move the heavens and earth if he must to find her and completely possess her. You will white knuckle this book and hold on with bated breath as the pages turn and suspend you into a world so complex with plots, twists and turns, that even the most cunning of spiders or prey, couldn’t find their own way out without the help of something or someone supernatural. Happy reading!

since when has Tessa Dawn Gone PG?

Love the storyline, humor and the narrator is perfect to bring the warriors to life. Cannot wait for the next audible book in the series - please hurry!

Chills....all I can say is chills.

I NEED the next book NOW! I got chills and I am so addicted to this series!!