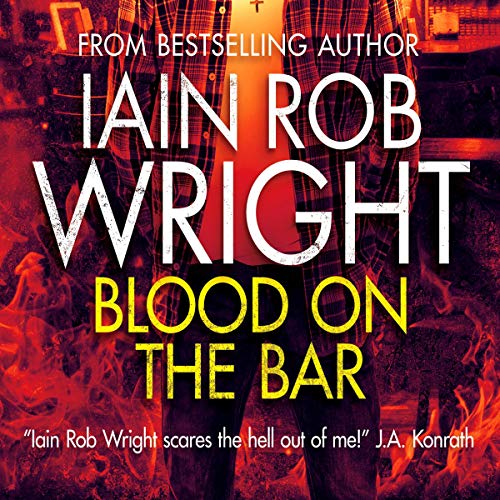 Blood on the Bar

An Irishman walks into a bar...

This isn't the first time Lucas Fergus has woken up next to the bins outside a bar, but it is the first time he's done so with no memory of the days before. Something bad has happened, but he has no idea what. And things keep getting worse. Is he finally paying the price for the things he's done during his long and debauched life?

With a sudden and unexpected change coming over him, Lucas finds himself trapped inside an old english pub with a group of people he doesn't much like. Someone is toying with him it seems; someone that has been holding a grudge for a very long time.

But messing with Lucas is a bad idea, for there is more to him than meets the eye. Soon there will be Hell to pay.

A fantasy horror novel with hearty doses of mystery and humour.

Iain Rob Wright scares the hell out of me!" (J.A. Konrath)

What listeners say about Blood on the Bar

A modern day take on Heaven and Hell
Angels and Demons.. Good and Evil..
A brilliant glimpse into the author’s imagination and eye opening possibilities… a great listen..

This was an amazing story fast paced and funny.

The characters were developed well and rounded out the story.

Aubrey Parsons is a terrific narrator.

this was a fun book. all the characters were interesting, and the narrator did a great job bringing it togther.

I wish I hadn't waited so long!

I've had Blood on the Bar in my Audible library for months, and I regret not listening sooner. The story is gorgeously narrated and fantastically written. Wright throws twists into his writing more comfortably than a teenager makes pretzels at the mall.

i started this book a few months ago, I put it down. I picked it up again and gave the first chapter another go, I'm so glad I did, it was great . I look forward to another by Ian rob Wright . thank you so much for allowing me to listen, I give this story a great review!

This was amazing! Not at all what I had expected but that also made it so, so good! I HAVE to know what happens next!!

Not quite what I was expecting

Not quite what I was expecting but thoroughly enjoyable despite that.

I thought it was a horror novel, but it's more of an urban fantasy about good vs evil. Devil turned good guy etc.

It's a long story, longer than you would expect to fit into just under 8 hours, you keep thinking it's all over but then ... NO, it just carries on, it did end eventually though, sadly. Lucas is hilarious, although I couldn't help comparing him to Lucifer from the show of the same name. The rest of the team are a rather entertaining bunch too, I recommend that you buy this book and find out all about them.

The narration is fantastic on this one, although Lucas's accent change threw me at first, it is apparently intentional.

I received a free copy of this title, at my own request, and voluntarily leave this review.

Excellent writing and narration combine to make this an extremely entertaining story that I'm sure you will enjoy.

Good enough that I'll get the next one.