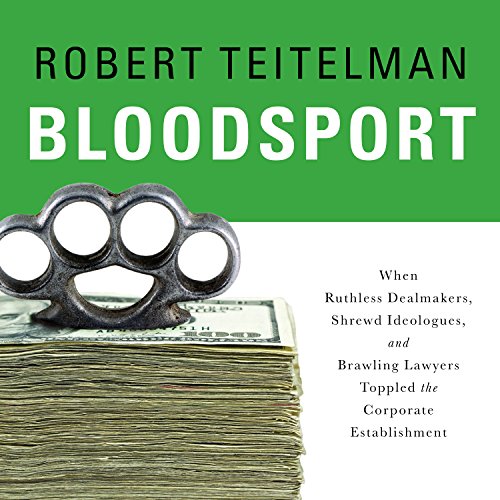 Written by: Robert Teitelman
Narrated by: Neil Hellegers
Try for $0.00

Bloodsport is the story of the creation of America's deal culture and the battle for control of America's corporations. Told through the fascinating, complex, and often flawed characters who created a new era, it begins as the '60s are ending, with the rise of the conglomerates, those vast assemblages of corporate assets. It rolls through the crisis-wracked '70s and the birth of the hostile deal then careens into the '80s, when the deal culture of mergers and acquisitions is truly unleashed. The '90s see backlash, retrenchment, and rethinking. The new century brings bubbles and deregulation, ending in disaster. And following a quiet period after the financial crash of 2008, we are witnessing the full-throated battle once again.

Since the first hostile deal in 1975, mergers and acquisitions have set off a revolution in who controls and governs American corporations. The rise of the deal raiders ushered in a world where literally no company was safe. Year after year, blockbuster deals unfolded. Many were hostile, most were complicated, and the majority were dead on arrival. Together they tell a story about money and power and the creation of a new era in business.

"Teitelman has a masterly command of his subject." ( Publishers Weekly)

What listeners say about Bloodsport

Best US corporate finance-law-history book EVER

If you appreciate the ideas and the thinkers as well as the direct players in this field, and you like that delivered up zestily woven with artful, engaging descriptions of the dramas, clashes and personalities across a big canvas, there is no more listenable or informative resource on this topic anywhere, to my knowledge. And what is my knowledge? I read dozens of this sort of book every year. The title almost dissuaded me from buying it, because I avoid lurid catchy (dumb, downmarket, too-popular) content. I am so glad I bought this. This is the smartest book about this topic I have seen, and the most engaging. A few times while listening I have mused, "this might be the perfect book." The author doesn't hesitate to dig back into the background wherever it is illuminating, as far back as Revolutionary War times. The author will grab a thread and trace it across a couple centuries (and several states and various characters), if need be. It is all brisk in tempo, and all in service of enlightening us about this amazing, complex cluster of topics. More please, Robert Teitelman! And the narrator fits the material like a glove.