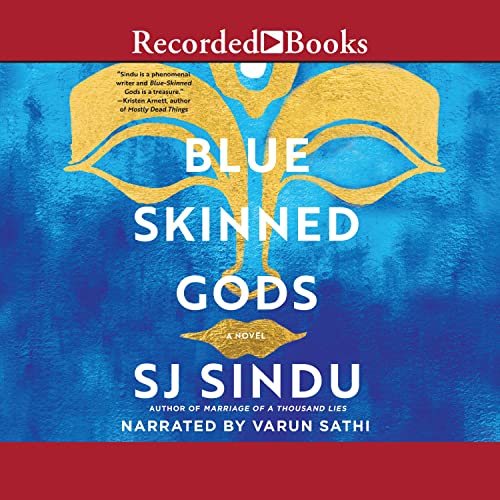 From the award-winning author of Marriage of a Thousand Lies comes a brilliantly written, globe-spanning novel about identity, faith, family, and sexuality.

In Tamil Nadu, India, a boy is born with blue skin. His father sets up an ashram, and the family makes a living off of the pilgrims who seek the child’s blessings and miracles, believing young Kalki to be the 10th human incarnation of the Hindu god Vishnu.

In Kalki’s 10thyear, he is confronted with three trials that will test his power and prove his divine status and, his father tells him, spread his fame worldwide. While he seems to pass them, Kalki begins to question his divinity.

Over the next decade, his family unravels, and every relationship he relied on — father, mother, aunt, uncle, cousin — starts falling apart.

Traveling from India to the underground rock scene of New York City, Blue-Skinned Gods explores ethnic, gender, and sexual identities, and spans continents and faiths, in an expansive and heartfelt look at the need for belief in our globally interconnected world.

What listeners say about Blue-Skinned Gods

Human strengths and weaknesses.
Money, power and greed.
The search of ones true self.

The ending is a little anti climactic but the book really makes you think hard about a lot of things and beliefs you might hold. It’s overall a great story and highly recommend

Love the story, not the recording.

While I loved the book and the narration by Varun Sathi, the sound quality was extremely distracting. I kept thinking there was someone thumping on the roof or behind me before realizing the thudding sound was coming from the audiobook itself.