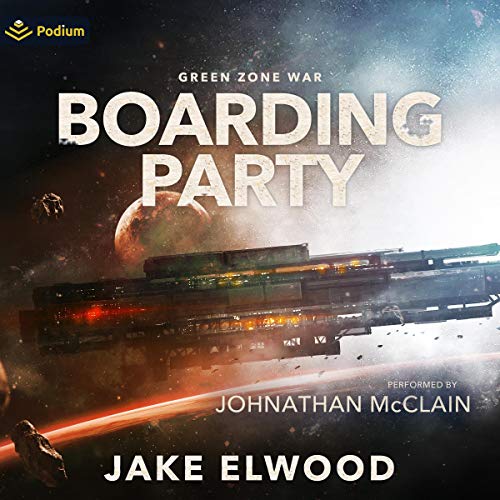 Written by: Jake Elwood
Narrated by: Johnathan McClain
Try for $0.00

Desperate to redeem himself, he makes a rash wager - he’ll lead a squad in a mock attack, boarding and capturing the visiting gunboat Diana in record time. He hasn’t got a chance, and to make matters worse, there’s a visiting admiral watching the attack from her yacht. Tom, desperate, sneaks aboard the Diana through a gun port - and stumbles into the middle of something much worse than a training exercise. There’s a traitor aboard the Diana, planning to blow the admiral’s yacht out of the sky.

Suddenly Tom is fighting for something much bigger than a foolish bet. If he loses, the admiral dies - and so does Tom.

What listeners say about Boarding Party

what was the point?

3 chapters? thats not a story so try harder is this 15 charaters yet? i now have more characters than the book

A great narrator and storyline

I really enjoy the storyline and the narrator is amazing with a wide variety of accents.

This novella was very intriguing, I like the emothional connection of the characters and can't wait for more.

Fun little snipet. Too short for a credit. but was included with membership.
Some parts/characters predictable but surprise ending.
Felt more like a chapter in the first quarter or middle of a book than a novella.
Did leave me interested enough to put this author on my radar. will probably check out at least the first book in series, so having it in the Free Members Catalog was smart move on author's part.
Narrator did a good job so far. At least he didn't make me cringe from really bad female or accented characters. His German accent was what you'd expect from typical TV reditions.

Not a fan of the reader.

Not a fan of the readers voice. It really kept me from getting into the story. Boarding is happening and he has the enthusiasm of somewhere between Mr Burns and Ned Flanders.

Ok but Series Is Great

I guess it’s an ok short story but doesn’t have anything to do with the series and not in that league.

Failed to see how this is placed in the storyline

This story takes place in like the first I want to say couple hours of book one this story is irrelevant and it's kind of like a side thought or an alternative universe for the author.

Delightful! I will listen to more of this author!

This is about a 30 minute listen, and you won’t regret a single minute. I’m looking forward to learning more about the Jake Elwood universe. I can’t speak to character development in such a short sample, but I did like Tom and Horst. I will put more of Jake Elwood’s books on my wish list!

You'll enjoy the book. Excellent story and performance. Glad to see these quality of books in the free catalog. Thanks

a good story, and a good performance. I can't believe it was free. Highly recommended.

Even though this was so short, it kept me engroced right up until the end. Now I cannot wait to continue with this series.

Entertaining short war story that kept me on my toes trying to understand the situation.

not the most exciting to start with seems to have extreme possibilities in the series. as well as it seems clean in this first book not a bunch of cussing or sexual stuff included plus for me period