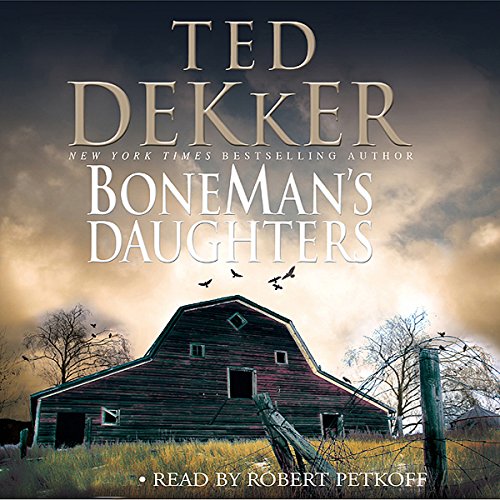 A Texas serial killer called BoneMan is on the loose, choosing young girls as his prey, His signature: myriad broken bones that torture and kill - but never puncture.

Military intelligence officer Ryan Evans is married to his work; so much so that his wife and daughter have written him out of their lives. Sent to Fallujah and captured by insurgents, he is asked to kill children not unlike his own. The method: a meticulous, excruciating death by broken bones that his captor has forced him to learn.

Returning home after the ordeal, a new crisis awaits. A serial killer is on the loose, and his method of killing is the same. Ryan becomes a prime suspect, which isn't even the worst of his problems: Ryan's daughter is BoneMan's latest desire.

In a story that is devaststing in its skill and suspense, Ted Dekker brings to bear his ability to terrify and compel in BoneMan's Daughters.

This is one sick twisted character

Very well written. This is the first time I have listened to Ted Dekker. I really enjoyed listening, several time I was unable to get out of the car when I had arrived at my destination. I really enjoyed the conversation with the author at the end of the book, great touch.

Not for the faint hearted

Excellent listen. Narrator does a great job of making the bad guy sound totally creepy.The book was pushing the limites of what I like to listen/read. I don't like to read about physical violence and if that type of stuff gets to you this may not be a good choice.
That aside, it definetly kept my attention. It gives you a good look at evil and how evil like to justify its actions. If you read the bible you will be able to identify with the obvious and underling thems of the book.

Creepy in a good way

My wife likes spooky, scary and serial killers, I like thrillers and suspense. We listened while on a trip and we both enjoyed it very much. Serial killer with a twist. We are looking at other Dekker books.

Give this a chance!

Out of the 8 reviews so far, 5 are negative, so I felt compelled to say a positive word. This was very thrilling and kept me glued to my ipod.
I also want to give a word of advice to Audible listeners. Don't reject a book here based on a few reviews here. Look at reviews on other sites like Amazon.com first. I almost made the mistake of rejecting this book based on those negative reviews here. It would of been my loss.

I commute to work, and this book kept my interest throughout the entire thing. Great book!

An excellent mystery/thriller with a message of fatherly love. Great read!

This is a chilling and gruesome book. To think that there are people out there like the Boneman is disturbing. But sometimes I like to read chilling, gruesome and disturbing books. This was a good one.

What did you love best about BoneMan's Daughters?

The change Ryan made in his life and how determined he was to save her.

What other book might you compare BoneMan's Daughters to and why?

I don't believe I've read a book quite like this one.

Without giving too much away, but if I had to pick one scene, it would be the part at the end where Bethany makes the right decision to fix her problem for good.

Intense thriller that keeps your interest

This story really keeps your attention from the beginning where the main character is put in the postion of making a hoffific choice between keeping his family safe and saving the lives of several innocent children, too the development of what ultimately does happen to his family and how they connect, I could not wait to see what happened next. It was an excellent illustration of how someone could be pushed to do things he never normally would even consider. I was glad that the main characer did find ways to show restraint.

I will choose more books by Ted Dekker. I was only disappointed that there was no epilog at the end.

If you like intense, dark thrillers you will enjoy this one!

The worst book I have ever downloaded!

I have downloaded about 50 listens from Audible, and this is by far the worst. I always read other people's reviews (unless I'm really hooked on the author), but in this case there weren't any yet and I thought I'd take a chance. NEVER AGAIN!
This book was painful to listen to, going over the same things time and time again, and again,and again,and...It became totally unrealistic as it went on and on, with the characters remaining coherent after the worst supposed abuse and days and days of no food or water. And it was based on the rediculous premise of a father who has ignored and been mostly separated from his wife and daughter for 18 years, all of the sudden seeing the light, and then realizing he can't live without either of them.
We were on a long drive when listening, but after many painful hours, we kept fast forwarding, hoping we might find something redeeming somewhere in this book. We're still looking...