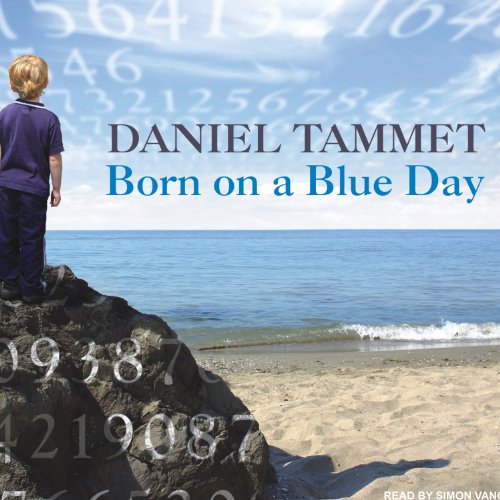 Born on a Blue Day

Written by: Daniel Tammet
Narrated by: Simon Vance
Try for $0.00

One of the world's 50 living autistic savants is the first and only to tell his compelling and inspiring life story and explain how his incredible mind works.

Worldwide, there are fewer than 50 living savants, those autistic individuals who can perform miraculous mental calculations or artistic feats. (Think Dustin Hoffman's character in Rain Man.) Until now, none of them has been able to discuss his or her thought processes, much less write a book. Daniel Tammet is the first.

Tammet's problems were apparent from childhood. He was shunned by his classmates and often resorted to rocking and humming quietly. Yet he could memorize almost anything, and his math and language skills were astonishing. By high school, Daniel was diagnosed as autistic, and he began to discover his own superhuman abilities: calculating huge sums in his head in seconds, learning new languages in one week, and memorizing more than 22,000 digits of pi.

With heart-melting simplicity and astonishing self-awareness, Born on a Blue Day tells Daniel's story: from his childhood frustrations to adult triumphs, while explaining how his mind works. He thinks in pictures. He sees numbers as complex shapes: 37 is lumpy like porridge; 89 reminds him of falling snow. Today, Daniel has emerged as one of the world's most fascinating minds and inspiring stories. His brain has amazed scientists for years, and everyone will be moved by his remarkable life story.

"[Tanmet's] ability to express himself clearly and with a surprisingly engaging tone (given his symptoms) makes for an account that will intrigue." (Publishers Weekly)

What listeners say about Born on a Blue Day

I enjoyed this as both a psychologist AND a human. I highly recommend it for anybody with any interest in human cognitive or moving personal stories.

Yes, Daniel's childhood is ordinary (if having 8 siblings is ordinary) but the way he experiences his childhood is unique. This was a book that I hated to see end. I listen to 2 or 3 books a month and this one ranks as one of the best. The narrator is excellent and does a great job being Daniel's voice. I did wish I could have seen illustrations in the book as I'd like to know how the numbers look to Daniel, but my imagination filled in the gaps. I highly recommend the book for all who want a deeper understanding of those on the autism spectrum. It provides good fodder for thinking about how our brains work.

This is an Important Book

I understand why others may not have found this book to be of great interest other than from the superficial level of the author's great number and language abilities. But as a parent of an autistic child I can tell you that it is an eye opening and important book. I learned so much about how my child learns and thinks from listening to this memoir. To me this was less about the savant abilities and more about all the people along the way that helped Daniel to become a fully functioning and productive person and how they loved him for who he was and gave him room to just grow as an individual. It makes me want to be a stronger person and a more supportive and better parent. Because this was a highly personal book for me I wouldn't expect that people who can't directly relate to the effects of life on the autistic spectrum to be as interested but I am grateful to have listened to it and have bought the hard copy book as well.

The autistic spectrum is apparent in Daniel's extreme recall of detail-- some judicious editing might have eliminated some of the tedious bits. But, self involvement is part of the spectrum as well as the astounding gifts of the savant. Even understanding that this is the case, one doesn't necessarily want to read what the fellow had for breakfast when it does nothing to inform or
lead us to understanding. But, in all, it is a book about a unique person and a worthwhile read.

Temple Grandin's books on autism are more riveting, without the self-obsessed point of view.

I have somewhat of an academic background and a deep interest in language, so I found this book extremely interesting and whizzed through it. If you're not sure about it, worried about the other comments of slowness, boring childhood or self-indulgence, have a search for the documentary on Daniel Tammet/ Brain Man on You Tube and you'll know for sure.

My wife also listened to this book very quickly and would probably give it 5 stars too. She's not that interested in language nor much of an 'academic' but she found it very good, mainly because of the way he describes how he sees life, and his perspective on so many things. In short, she says he's "extraordinary," which is an understatement if in fact he could be the next step in our evolution.

This book had its interesting moments, but unless you're inordinately fascinated by numbers I would give it a pass. It gives a little insight into an autistic mind, but so does the aforementioned movie, as well as Temple Grandin's (more interesting) book, Animals in Translation.

Books about someone gifted never seem to be autobiographical. All the political autobiographies serve as proof of that. But here's a book by the actual guy living it. I was fascinated. I was touched (and I am usually the caveman at the book review). It's as genuine as it gets.

I don't read much nonfiction, but this biography had me hooked. I was so fascinated by Daniel's perceptions about numbers and language, I couldn't stop thinking about it. I shared all the really interesting insights about how Daniel's brain works with my family over dinner. They were equally surprised by the contrast.

I can't say that I relate to Daniel, but I think I understand him better and I appreciate the way he thinks and feel it could be beneficial to others who struggle with math or language.

I am looking forward to watching the documentary, Brainman, to find out more about Daniel and "see" the things he describes in the audio book.

A rare description of a Savant from the inside.

Most people who are on the same level of mental capability as Daniel Tammet (like being able to do in his head that makes calculators run out of digits) are lacking the ability to describe what goes on their mind. Luckily for anybody readying this book Daniel is a one in a billion and does a great job of describing what goes on in that brain.

Listen to this book!

I was fascinated by the workings of the mind of an autistic savant and Tammet tells his story with grace and wonder. I laughed and got teary and was amazed at the mental skills. The book is intellectually stimulating as well as emotionally touching. The reader, Simon Vance, gives perfect pitch to Tammet's voice.

Informative but self indulgent

This is a highly informative look into a world that few have access and fewer can truly tell about - the mind of a savant.
It is quite insightful and informative to see how his mind works
Unsurprisingly the story dips toward self indulgent tangents on a periodic basis but overall is a worthy book