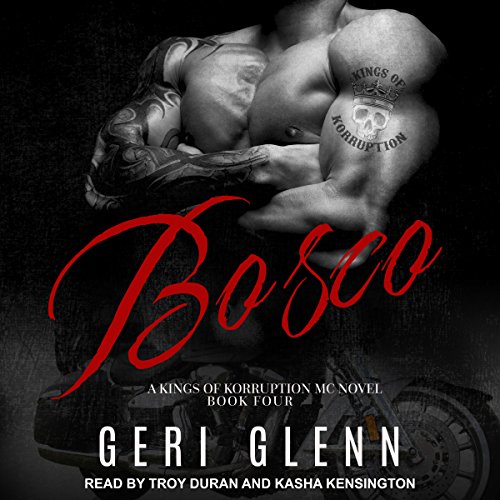 I was just six months pregnant when I lost the man I was going to marry. Mouse was caught in the crosshairs of a war between the Kings of Korruption MC and a rival club, leaving me to raise our daughter alone. Brokenhearted, angry, and terrified, I struggle through life, determined to raise my daughter the best way I know how.

Since the day Mouse was killed, Bosco has been tasked with watching over us. As time passed, he became a part of the family, a man on whom my daughter can rely. A man who has never let me down and whose intensity makes me weak in the knees. But that man is part of the same club that got Mouse killed, and there's no way I can put myself or my daughter through that a second time.

Taking care of Sarah and her daughter may have started out as a duty handed down to me by the president of my club, but now it's as vital to me as breathing. Now I've become attached. I've learned how kind, brave, and sexy Sarah is. I was even there when she gave birth to the little girl who captured my heart the moment she took her first breath. My feelings for her have turned from friendship to an all-consuming passion that threatens to burn me from the inside out, but I know she's not ready. So, I wait.

What listeners say about Bosco

Troy Duran’s voice is intoxicating. I could listen 24/7. kasha Kensington has an easy to listen way of speaking too. They bring the story to life. This 2nd chance to find love story for both the male lead and the female lead is really a good read-listen. Little Millie is precious too. HEA. Although there is brotherhood displayed, there is not so much MC drama-action-conflict in the story. It’s a romance. Enjoy

You never think that your past would help someone

You lose the love of your life the father of your unborn child. You hate the even thought of the MC he was associated with but they tell you that you will always be family. When times get tough realize they meant what they said

Every single mother needs a Bosco!

I loved Bosco, Milly (Sarah & Mouse's daughter) & the rest of the gang. Sarah however was written as a selfish, bitter,hard woman. Bosco deserved better .Her treatment of Bosco was low & what mother, when asked if there's any family who might be a donor match for her child, doesn't bother to mention her parents even if they are estranged . You do whatever you can to save your child. This could've been a 5.

Sara was a BITCH

A beautifully unexpected, emotional, and heartfelt journey to go on with Bosco and Sarah. I enjoyed every single moment of this book.
Troy Duran and Kasha Kensington were perfect for this story. They were both fantastic.

I really enjoyed the story line and the narration was very good. The author has done it again with a great listen. This entire series was wonderful. I can't wait to see what's next.

Can’t wait for the next book in this Series! Ok Geri Glenn your killing me with these tissue-boxes I keep going through😉 . No MC Action in this book, but still a great book.. looks like you’ll make up the MC action in this next one though! Wow I love the scene in the hospital the coffee scene with Sarah and Ryker! Sarah was really starting to tick me off lol 😂 ok I better stop want the readers/listeners to enjoy! I hope you keep these great narrators going, because that really makes the story come to life☺️

love the kings, all books were great especially Bosco. I enjoyed how all kings were included in this book. cant wait for the next one...

This was a well written story. Sometimes when bad things happen in your life, it’s hard for you to embrace the good that comes along. That is what happens in this story. How to accept the family you weren’t born into, but brought into? Great story.

This book is fantastic ( just bring the kleenex) The narrators were AWESOME! THE WHOLE SERIES WAS ABSOLUTELY PERFECT!!