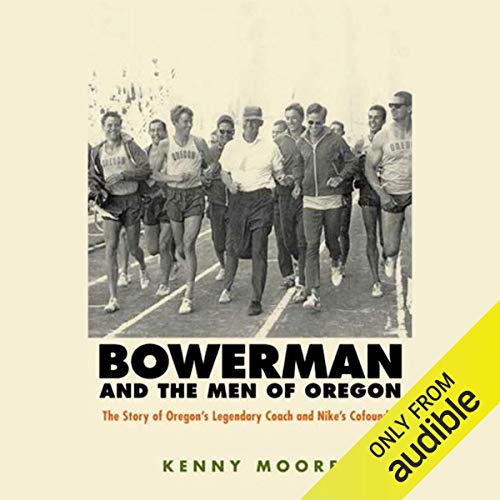 Bowerman and the Men of Oregon

Written by: Kenny Moore
Narrated by: Paul Cirzan
Try for $0.00

No man has affected more runners in more ways than Bill Bowerman. During his 24-year tenure as track coach at the University of Oregon, he won four national team titles and his athletes set 13 world and 22 American records. He also ignited the jogging boom, invented the waffle-sole running shoe that helped establish Nike, and coached the US track and field team at the 1972 Munich Olympic Games.

With the full cooperation of the Bowerman family and Nike, plus years of taped interviews with friends, relatives, students, and competitors, two-time Olympic marathoner Kenny Moore - himself one of Bowerman's champion athletes - brilliantly re-creates the legendary track coach's life.

What listeners say about Bowerman and the Men of Oregon

This is a book with a lot of heart. It not only highlights the successes of a highly recognizable character in the form of Bill Bowerman, but it also displays a cast of real people who resemble ordinary people you may know doing extraordinary things. I find the narration at bit mellow, but overall, it certainly fits. This is the first of many audiobooks I plan to "read" through this fantastic service via Audible.com. And no I have no interest in Audible or author. My only compensation was the opportunity to enjoy this book which I accessed through the free Audible trial. Keep em coming. Thanks to Kenny Moore for honoring Bill and his great athletes. I've learned and internalized much from this work. Very inspiring!

An amazing and emotional read!

If you could sum up Bowerman and the Men of Oregon in three words, what would they be?

Hearing about the story of how pre built the jogging industry and his passion for coaching was amazing! Also the story of Prefontaine was really incredible and made me emotional reading about it.

A Robust Tale of an Incredible Man

It took me a while to listen to this one, as I wanted to digest it slowly. With everything from United States and world history, wars, to love, family, true friendship, to business lessons, courtroom drama, chemistry, design, to thoughtful descriptions of many of running’s heroes, to learning the origins of the foundations of modern day running and physiology and the wisdom of its architect, this book will make you not only a better athlete, but wholly a better person because you really get to understand Bill Bowerman. Bravo.

While I admire the author’s attention to the details, there are times when it’s too just too much. It’s a good book but you start to feel the length, especially after you’re half way through.

Thank you Mr. Moore for writing this book. This is a true classic. It belongs on every runner’s shelf. Beautifully written, loaded with details, I feel like I was there. I’m so thankful to be able to have such a first-hand account.

Must read for Sports history fans

An amazing capture of an American sports icon. well written, well read, I didn't want it to end.

this is a great a book, a must in your list. for any runner or PRE fan you will enjoy this book.

This is an amazing telling of the life of a great and inspirational man. This book has made me go back to my roots to run again.

Story of Bowerman is really interesting, but all the times and distances make listening to the book slightly confusing.

So much more than I expected! A true great!

I knew so little in comparison to what I learned; it makes me wish that I had known him.