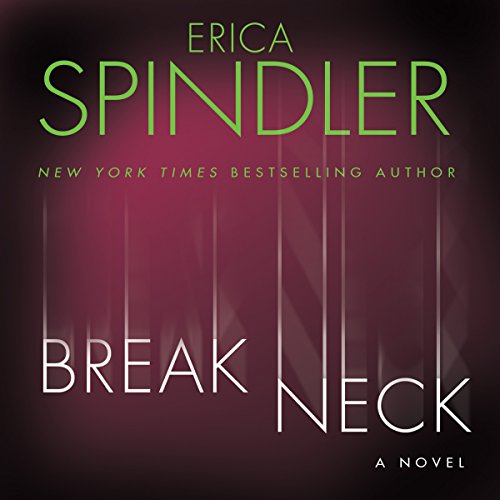 Written by: Erica Spindler
Narrated by: Lorelei King
Try for $0.00

Breakneck marks the return of Detectives Mary Catherine (MC) Riggio and Kitt Lundgren, partners in the police department's Violent Crimes Bureau in industrial, blue-collar Rockford, Illinois. The two detectives are faced with tracking down a monster unlike any they have encountered before.

The clean, seemingly emotionless kills leave MC and Kitt little but the growing string of victims to follow - all young adults, clean cut, kid-next-door types who've never taken a step outside the law. And this time around, it's personal for MC: The first victim is her cousin Tommy Mariano, oldest son of her favorite aunt.

As MC and Kitt hunt a faceless killer, they are led deep into cyberspace, where no one is who they seem and you never know who's watching. At the heart of this fast-paced thriller is the relationship between the two headstrong women, their struggle to balance their dual roles, to learn to trust, and to walk the fine line between upholding the law - and taking it into their own hands as they race to find a murderer.

What listeners say about Breakneck

I ended up listening to this one all night

It is not too often that I start a book and can not stop until it is finished. This was one that I just could not turn off. Everytime I thought I was getting to a good stopping point something big happened and I had to listen on.

What I really liked was the ending. I thought I had this one figured out fairly early on but was quite surprised who it was.

Enjoyed this one; great narrator

Yes. A good story, like-able protagonists, not too many characters.

Yep, the ball keeps rolling. The chapters are short, and end with a hook.

A great Audible selection. Thank you.

I really enjoyed this book, this was my first time having the pleasure of listening to anything by this author but most assuredly not the last. The book kept me wondering and just when I thought I knew who'd done it I'd find out I was wrong. It was at times a little confusing keeping the players straight, I figure I'll wait a couple of months and listen to it again and if your reading this review I'd advise you to read it too.

Another great performance by Lorelie King.

Another great performance by Lorelie King. She turns the story into a movie on your mind. Apoor narrator can ruin the best of stories. The story was well written and had good pace.