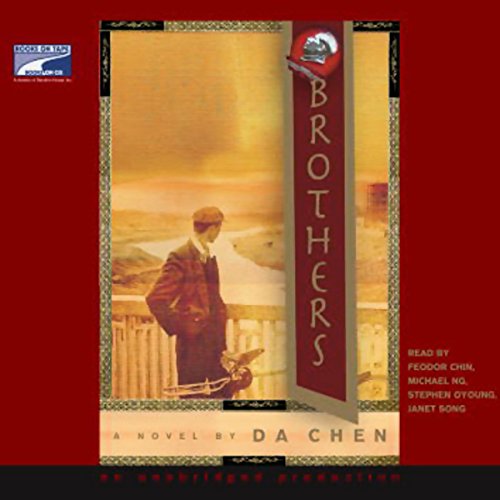 Written by: Da Chen
Narrated by: various
Try for $0.00

Growing up, each remained ignorant of the other’s existence. In Beijing, Tan enjoyed the best schools, the finest clothes, and the prettiest girls. Shento was raised on the mountainside by an old healer and his wife until their deaths landed him in an orphanage, where he was always hungry, alone, and frightened. Though on divergent roads, each brother is driven by a passionate desire - one to glorify his father, the other to seek revenge against him.

Separated by distance and opportunity, Tan and Shento follow the paths that lie before them, while unknowingly falling in love with the same woman and moving toward the explosive moment when their fates finally merge. Brothers, by best-selling memoirist Da Chen, is a sprawling, dynamic family saga, complete with assassinations, love affairs, narrowly missed opportunities, and the ineluctable fulfillment of destiny.

"From Shaolin to the sugarloaf mountains of Gwangdong to Tiananmen Square and the skyscrapers of New York: an epic novel that neatly distills modern Chinese history. Da Chen's elegantly written novel ends on the promise of redemption." (Kirkus Reviews)

"This story of revenge, adventure, and an explosive love triangle satisfies a taste for historical fiction as well as for a family saga." (School Library Journal)

"Chen deftly blends pathos and humor in this breathtaking evocation of an era of momentous political, social, and economic change." (Booklist)

What listeners say about Brothers

Extremely disappointing. Cardboard characters, awkward dialogue and amateur, awkward readers. The characters are unbelievable - no depth - black & white. Ridiculous, fortuitous events - $60 million magically appears in a bank account - grandfather put $20 million there years ago and the investment has done well - poverty problem solved! The good guys can't do enough good and the bad guys are bad through & through. A struggle to get through - no new information or insights on China - certainly not worth 2 book credits.

Brothers - worth the proce

I really enjoyed the book. The story line was excellent, the characters were well defined. The historical and cultural aspects of the book were I thought valid and closely followed reality.
I found myself wanting more, so the ending was for me a bit abrupt. Tes, all the loose ends had been tied together; but I wanted to know what happened next. I hope there is a another book???

The worst book I ever listened to

Pat, Banal, with cartoon characters. A big waste of time. Don't know why anyone liked it. There are so many other good books about the development of modern China. Don't waste your time.

The characters are flat and the event are predictable. The readers are ok but they can't do much with the bad material.