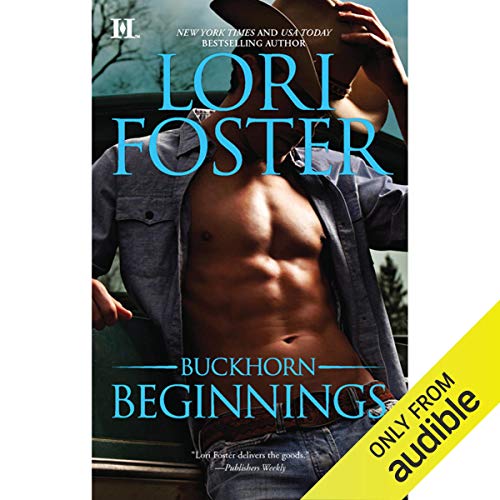 Written by: Lori Foster
Narrated by: Isabelle Gordon
Try for $0.00

Sawyer Hudson, the only doctor in Buckhorn County, took it upon himself to rescue the beautiful but enigmatic woman who came literally crashing into his life. Though he knew he should keep things platonic and professional, around her his body had other ideas. And his heart was no more cooperative.

Honey Malone was on the run, fleeing a dangerous predator, when she lost control of her car, drove into a lake… and found herself up to her neck in breathtaking men. After the brothers nursed her through her injuries, she tried to leave, but she hadn’t bargained on their stubborn protectiveness. Or the passionate bond that tied her to Sawyer.

Morgan Hudson commanded a lot of respect as Buckhorn’s biggest, baddest sheriff. How one petite city woman could turn him on his head was a mystery, not to mention being downright aggravating. But Misty Malone did just that, and Morgan couldn’t wait till she went back where she belonged. But then he discovered why she’d come in the first place.

Misty Malone had hoped to take refuge with her sister, who’d just married into a family of sinfully attractive brothers. They all treated her like gold—all but one. Morgan seemed to think she was some sort of femme fatale, out to seduce his brothers. But seduction was the last thing on her mind. Foremost was the baby she was secretly carrying. And then, how to avoid the sexual sparks flying between her and Morgan.

What listeners say about Buckhorn Beginnings

Let me start with the yummylicious cover *wipes drool* because it definitely caught my attention. This audiobook includes two stories that were originally published individually. The first and second book in the series focus on the brothers Sawyer and Morgan. There is a second audiobook Buckhorn Forever that ends the series and includes the story of the other two brothers.

Sawyer is a single dad who has been burned in the past and never wants to fall in love again... But Honey comes into his life by accident (literally) and a very sweet and sexy romance develops. Morgan is the responsible sheriff who is ready to marry a nice sweet woman but when he meets Misty (Honey's sister) who is very different from his ideal woman his world is turned upside down.

Sawyer's story is significantly better than Morgan's. Morgan's story was funnier but the audio had a problem. Apparently the last hour was recorded twice (it repeats the last hour). These are very much Harlequin type predictable love stories but sometimes you just want to listen to a good happily ever after. If you enjoy sweet love stories with sexy perfect men then this series will be great for you.

Narration: Isabelle Gordon did a good job. Not the best I've heard but I would listen to more books narrated by her. Her male voices are ok and she did add intensity to the love scenes.

It's been a while since I've read or listened to straight up romance and I had forgotten how formulaic they can be. This one is on par for an old style Harlequin-like romance which is to say it's neither terrific or terrible. It's fine for what it is. If that's the content you're looking for, no need to look further. But...be warned about the performance. I found it utterly distracting and almost didn't continue past the fourth chapter. The reader starts the beginning of each sentence with a deep, strong, almost masculine delivery and ends each sentence with a soft, feminine voice that trails off with a hint of entreaty. Every sentence. For at least five chapters. Whether it's called for a not. Ugh. This problem became less exaggerated as the book progressed. Nevertheless, be prepared for the voice the reader has assigned the heroine. She comes across as ridiculously and infuriatingly helpless which I do not believe is how the author intended and wrote.

Does this ever pick up

I normally really enjoy Lori Foster and her books grab me from the first page but after listening many hours there still has been nothing interesting happening....

I grabbed Buckhorn Beginnings on audio a few months back when it was on sale at audible.com and was saving it for a rainy day. So when I was starting to get a little burn out on all the UF books I've been reading and listening to I knew it was time to dust this one off.

It was just want I needed. Not one but two sweet and sexy contemporary stories in one audio. Buckhorn Beginnings is my first Lori Foster experience and before I was halfway through it I ran over to audible and grabbed the next audio, Forever Buckhorn. I knew I had to hear the other sexy brothers' stories.

Foster knows how to write a sweet, emotional and sexy story. And the fact that the Hudson family has 4 sexy brothers is a real treat.

Sawyer's story was a very sweet story about a normal town doctor living with his brothers and raising a son. His world gets turned up side down when a pretty little blonde wrecks her car on his property and he takes her in to nurse her back to good health. It was lust at first site for Sawyer but while he takes care of Honey, he starts having feelings for the stranger.

Sawyer's story is also as a touch of suspenxe to it as well. Honey is running from something or someone. Sawyer will stop at nothing to found out more about the beautiful blonde that has stole his heart.

In the second story about Morgan we get to see this hard as nail town sheriff fall in love. And it's a site to see. The bigger and tougher they are, the hard they fall and Morgan is no exception.

I knew when we find out in Sawyer's story that Honey had a sister that she would hook up with one of the other Hudson brothers but I was not expecting it to be Morgan.

Just like her sister, Misty has a secret when she comes to the Hudson ranch. While Misty is visiting Honey, she finds herself the center of attention among the other Hudson brothers. Everyone but Misty and Morgan know that she is off limits though. See everyone can see the two have a connection even if they don't want to see it.

After fighting their attraction to each other, Misty and Morgan start working together in Morgan's sheriff office. Morgan might look and act like a bear, but Misty starts seeing the caring and loving man he is on the inside. One thing leads to another and the two find themselves in love.

I can't wait to start the next audio, Forever Buckhorn to find out more about the other brothers, Gabe and Jordan.


Narration Note:
Isabelle Gordon is the first female narrator I've listened to where I like her male voices better than her female voices. She does a good job with both but her males are one of the best I've heard a female do. I also like that her "reading" voice is different than her voice for the dialogue. Some narrators do not change their voice enough so you can tell when they are reading the non dialogue parts of a book but Gordon does a really good job with this. I never once thought, is someone saying that or is it their thoughts.

what's with that voice?

Classic Nora Roberts. As always, fun, interesting, feel good story. But that voice? I dont' know if I can listen to the rest of the series with that whiny attempt at a woman's or child's voice. Love Nora, hate the voice.

I loved Lori Foster the the brothers are amazing. I just wish Casey's story was on here.

I think Isabelle Gordon did a good job. BUT the last 2.5 to 3 chapters were a duplicate of chapters earlier in Morgan’s book.

Wasn’t my favorite Lori Foster but I’ll keep listening or reading anything she writes.

Problem with the last few chapters?

There appears to be an issue with the last 2 or 3 chapters. It jumps back to a door rent part of the story. I haven’t tried deleting it and reloading, but I’m not sure what, if anything. I might have missed.

The last hour is a repeat of the end of the book don't know what's to be done.

I haven't found a book from Lori Foster I ddn't love. Now listening to her stories while working is incredible. The naration was nice too, with the slight variations to the voices, the story comes to life for me.