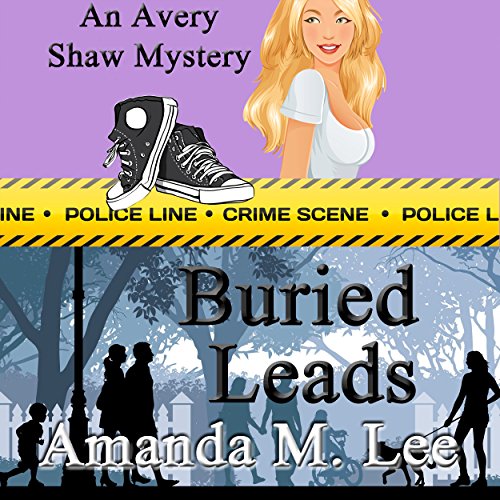 Journalists are supposed to report the news, not be it. For Avery Shaw, though, that's easier said than done.

Avery has spent the last month on her boss' list - you know the one - and she can't figure out a way to get off it. When a missing person's case involving a wealthy mother in the northern suburbs surfaces, Avery figures the best way to get back in his good graces is break the story of the year.

There are just a few problems standing in her way. First off, she's being stalked online - and it's starting to make her life difficult. She's also decided to actually start dating the hot pawnshop owner, Eliot, who saved her life a few weeks back. That sounds good in theory, but she's constantly crossing paths with her ex-boyfriend and that tends to make things uncomfortable (to say the least).

When you compound that with the fact that this missing persons case is more than it appears - and the office tool has been assigned to the story with her - Avery manages to get in over her head. Again.

Avery is sure that she can work things out to her advantage - as long as she doesn't die in the pursuit of yet another story in which she manages to get personally involved.

What listeners say about Buried Leads

I can't get excited about this series. The characters are immature and so is the story. I finished the story but won't get another book.

This cozy little mystery was well written and engaging but suffered from flat narration. While the author could've spent more time developing the main characters love of pop culture and a geek culture the overall mystery and story was good. Unfortunately all of the male characters sounded exactly alike and for the first few chapters The main character came off as shrill catty and immature.

Early in the book there seem to be some editing issues that worked their way out later in the story. The narrator seem to warm up to the characters just a little bit but still deciphering who was speaking as a male character was sometimes confusing.

The good news is that despite the narration difficulties it wasn't enough to completely turn me away from the story. I did enjoy the characters and the development as they were written and probably should have read this book in print

You needed to make sure that when you listen to this story. you are around friends. thank goodness my co worker knows me, or she would wonder what all the goggles and snorts we're about. I loved the story and the narrator brought Ms Lees's stories to life.

Avery Shaw does it again

Buried Leads is a gripping, snarky mystery full of quirky characters. Avery Shaw's task is to report upon a missing woman but luck is not with her as she stumbles upon the truth and all its grisly details. Angel Clark again does a stellar job with the voices, emotions and sarcastic comebacks. The only thing I didn't like is how some characters use racial stereotypes or homophobic snips. I do recommend this book because the truth at the end is jaw dropping.

and i Still love this one=) especially Derrick, at the end. i love how, no matter what or how much they mess with each other, the loyalty between them as family is always at the forefront. i Love it when Derrick swoops in, as Avery's favourite cousin (after Lexie, of course lol) and says the exact right thing. that they always have each other's backs, even when they're stabbing each other In said back=)
this series makes me so happy, im no longer even bothered (not Much, anyway) by the little discrepancies you'll find here and there 😁
💗💗💗

Avery does it again!

The author did a wonderful job with a compelling and amusing story, in typical Avery-fashion.

Angel did an awesome job, (as usual) giving life to a very colorful cast of characters! Never boring!

Anyone who enjoys a good mystery starring an irreverent protagonist, should love this book!

What did you love best about Buried Leads?

Love witty, sarcastic Avery Shaw and her odd family! The cast of characters is good and leads to laugh out loud one liners.

What other book might you compare Buried Leads to and why?

Similar to the Calamity Jane series by Kathleen Bacus. Main character is a journalist and the story includes oddball family and old boyfriend.

This was my first audio book and it was strange hearing a voice that was not the one I heard in my head when I read the book. It will be interesting to get the next audible in this series.

This is a funny book with laugh out loud moments.