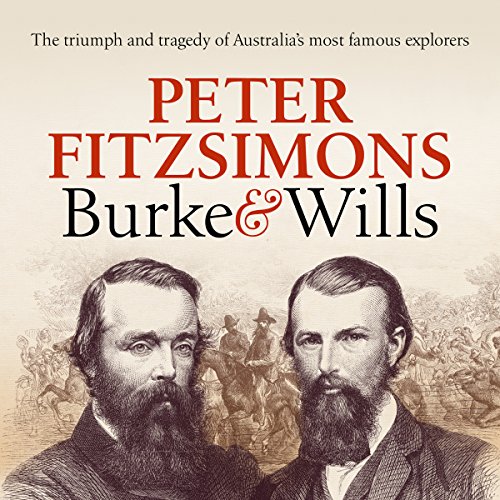 Written by: Peter FitzSimons
Narrated by: Michael Carman
Try for $0.00

'They have left here today!' he calls to the others. When King puts his hand down above the ashes of the fire, it is to find it still hot. There is even a tiny flame flickering from the end of one log. They must have left just hours ago.

Melbourne, 20 August 1860. In an ambitious quest to be the first Europeans to cross the harsh Australian continent, the Victorian Exploring Expedition sets off, with 15,000 well-wishers cheering them on. Led by Robert O'Hara Burke, a brave man totally lacking in the bush skills necessary for his task; surveyor and meteorologist William Wills; and 17 others, the expedition took 20 tons of equipment carried on six wagons, 23 horses and 26 camels.

Almost immediately plagued by disputes and sackings, the expeditioners battled the extremes of the Australian landscape and weather: its deserts, the boggy mangrove swamps of the Gulf, the searing heat and flooding rains. Food ran short, and, unable to live off the land, the men nevertheless mostly spurned the offers of help from the local indigenous people.

In desperation, leaving the rest of the party at the expedition's depot on Coopers Creek, Burke, Wills, Charley Gray and John King made a dash for the Gulf in December 1860. Bad luck and bad management would see them miss by just hours a rendezvous back at Coopers Creek, leaving them stranded in the wilderness with practically no supplies. Only King survived to tell the tale. Yet, despite their tragic fates, the names of Burke and Wills have become synonymous with perseverance and bravery in the face of overwhelming odds. They live on in our nation's history - and their story remains immediate and compelling.

What listeners say about Burke and Wills

This Yarn Is Rather Needling—Off The Rails, Even

I suppose I should have known what was coming; after all, I own the title "James Cook," written and read by the same pair as on this book.

But truth be told, I had forgotten. Otherwise I may well have run the other way, pursued by literary camels. I'm not sure quite what irritates me the most; it's either the narrator's attempts to go beyond the call of duty or the decision of the author to write this entire tome IN THE PRESENT TENSE.

Now just let me say that the Historical Present is a very common device that we ourselves use many times in everyday conversation, ie. "Okay, so he says to me "Ya gotta do certain things," and I'm not going to argue with him so I say" . . . and so on and so one.

Snippets of the historical present are, thus, not without precedent. BUT . . . choosing to write an entire historical narrative, not unsubstantial in sheer page numbers, is, at best an extremely odd decision, and at worst, an appalling and *constantly* intrusive literary choice which to my mind is completely unnecessary and is likely an attempt to draw attention to itself, as in "Oh yeah, isn't he the guy who writes all his stuff in the present tense?"

I can imagine this being done as a literary device with short histories, possibly about highly actionable military engagements, "The Hurricane begins his dive at 32,000 feet and comes barrelling in, guns blazing at the dozens of Messerschmitts arrayed below" etc. etc. . . . HOWEVER, as a device for a 700+ page narrative about a long, drawn out, somewhat static journey with sharp bursts of frantic activity notably few and far between, it's a rather poor decision. (Imagine The Rise & Fall of Nazi Germany, all in the present tense—it would be, to put it mildly, excruciating.)

So there's that, and then there is the narrator's decision to do "accents."

This is about as interesting as it is to watch one of those 60s "assemble-cast" movies about WWII, where the Germans speak English to each other with varying degrees of a German accent. That's presumably so we won't confuse the men in the German uniforms with the ones in the British ones.

But in this narrator's mind, "accents" consist of varying degrees of Irish mixed with German, except with the character of Ferguson, who speaks with an odd pseudo-American accent with nibbles of Scots, Austro-Hungarian and South African mixed in.

To be clear: the "accents" don't work, and the narrator seems to agree with this, as they invariably peter out back into a hybrid German-Irish accent, which is the narrator's preferred "Now someone of a different ethnicity is speaking" mode.

And all this combines to provoke unbidden irritation, as the entire story is rambling, disjointed, and all over the place . . . with the Historical Present used throughout the whole thing, accents and all, adds up to a barely coherent mess, and I'm only half-way through!

Oh, and I forgot the constant preoccupation with wordplay; puns, alliteration, rhymes, internal debates—all sorts of private subtexts with which the author seems inordinately proud; "I'm JOKING here! Get the joke? "Hare" and ""hair"—I made a joke with them, did you notice?" and that is pretty much on every page.

Again this sort of thing probably works better on the printed page, but reading it allowed (allowed/aloud! Get it? Get it?) is a different matter.

All this detracts from what is ostensibly the documentation of a serious and sometimes tragic journey undertaken by a band of determined bumblers through the wastes of the Australia outback . . . humorous aspects of the enterprise no doubt abound, but in the end, men and camels died and indigenous peoples' lands were invaded and seized, so a certain degree of non-levity should probably be the tome here.

All in all, a project that was in reality off the rails provides the basis for a documenting of itself which is, faithfully, off the rails.

great book a little slow to begin with.

The story of Burke and Wills is an amazing account of a true expedition to journey through the centre of Australia in 1860. There are many characters involved but large degree Grey between the heroes and villians. Misfortune and mismanagement frequently hound the expedition. Add to this a touch of the exotic, with the young nation drawing upon different nationalities to accompany the expedition. Not to forget the somewhat novel use of camels, as well as the frequent interactions with the natives. Loved every word of this book, and was rewarded by the extensive coverage given to the Royall Commision afterwards, further analysing the many failures of communication and management, that led to Burke and Wills being abandoned. As for King, there's a character who clearly suffered depression following his rescue.
If you've never read about the story of Burke and Wills, then look no further than Peter FitzSimons version for a vivid and thorough account.

Too cute and in present tense

The book is a thorough account but is frustrating to listen to for several reasons:

1- the entire book is written in the present tense which makes it seem overly contrived and cute
2 - the book has unnecessary phrases in the book that are maybe meant to increase drama such as “is it him, is it? Could it be?!?” which makes you want to skip whole chapters
3 - the narrator does accents which make everything take longer and seem more ridiculous
4 - wayyyyy too much time is spent on the deliberations of the exploring committee and not enough on the actual route and day to day issues and experience of the explorers. How did the cook? How did they sleep? What are the modern locations of the ranges they crossed??

Not my personal favorite

gave it a good try, dragged until half way through. I realized that this historical account had too much suffering and waiting around for me to be excited to hear what happened next.

The part about the photographs still makes me mad

I'm still stewing about the part about 3 hours from the end talking about the photographs. But aside from that the book itself is great, Interesting story I knew nothing about beforehand. The misconceptions by rescue parties searching for them about the aborigines really shows the flawed logic in a lot of the missing Leichhardt expedition theories of the same time. I feel bad for the horses and camels. I feel bad for the people. So many mistakes were made. I'm glad we have one witness to history in John King.

This was an amazing book with an excellent narrator in Michael carman. He really brings the story to life.