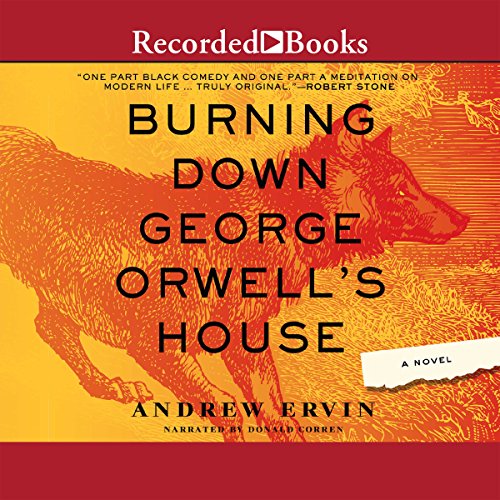 Ray Welter, who was until recently a high-flying advertising executive in Chicago, has left the world of newspeak behind. He decamps to the isolated Scottish Isle of Jura in order to spend a few months in the cottage where George Orwell wrote most of his seminal novel, Nineteen Eighty-Four. Ray is miserable and quite prepared to make his troubles go away with the help of copious quantities of excellent scotch.

But a few of the local islanders take a decidedly shallow view of a foreigner coming to visit in order to sort himself out, and Ray quickly finds himself having to deal with not only his own issues but also a community whose eccentricities are at times amusing and at others downright dangerous. Also the locals believe - or claim to believe - that there's a werewolf about, and against his better judgment Ray's misadventures build to the night of a traditional boozy werewolf hunt on the Isle of Jura on the summer solstice.

If you could sum up Burning Down George Orwell's House in three words, what would they be?

Who hasn't fantasized about dropping everything and getting of the grid? I know I do, often! This was a very entertaining story about that, placed so well in an interesting setting I could feel like I was there. Also, I love scotch too so there's that.

Loved the book had to put down. I wished it ended differently. The last 10 minutes were tough.

Very imaginative story of a disenchanted burned out ad exec going to extremes to search for major changes in his life.