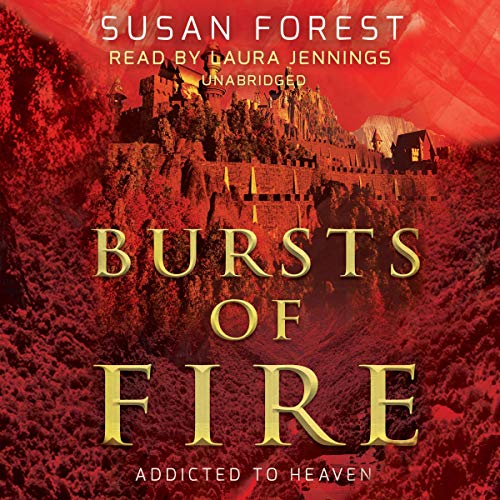 Written by: Susan Forest
Narrated by: Laura Jennings
Try for $0.00

Bursts of Fire begins an epic political fantasy of revenge, addictions, and redemption for three magiel sisters in an empire where magic has become suspect and where love and loyalty - for one's lover, one's family, one's country - are tested. If heaven desires the very earth be burned, what place can those below hope for, when the flames come for them?

The Falkyn sisters bear a burden and a legacy. Their mother, the imperial magiel of the kingdom of Orumon, protects her people from the horrors of the afterlife by calling upon the gods with a precious prayer stone. But war among the kingdoms has brought fire and destruction to their sheltered world.

When a mad king's desire to destroy the prayer stones shatters their family, the three girls are scattered to the wilderness, relying on their wits and powers they don’t yet master.

Assassin. Battle tactician. Magic wielder. Driven by different ambitions, Meg, Janat, and Rennika are destined to become all these and more. To reclaim their birth right, they must overcome doubtful loyalties within a rising rebellion. Additionally, they must challenge a dogma-driven chancellor's influence on the prince raised to inherit his father's war: a prince struggling to unravel the mystery of his brother's addiction to heaven.

To survive. To fight. To restore balance.

Praise for Bursts of Fire:

"An emotional story of familial love, tension, and mistrust among three sisters and three brothers...devastated by conquest and fanaticism. Readers who relish adventure mingled with a message will be engrossed in the plights of the two sets of siblings." (Publishers Weekly)

"Forest depicts strong female characters, with varying motivations and personalities adding plenty of action in daring raids, battles with war machines, and magical time walking, though equal attention is given to exploring relationships between the sisters and their allies. This exciting new series will have fantasy fans eagerly awaiting the next installment." (Library Journal)

"The first book in the Addicted to Heaven series promises an exciting political fantasy with realistic representation of mental illness and addiction and is sure to entertain fans of epic adventures." (Booklist)

What listeners say about Bursts of Fire