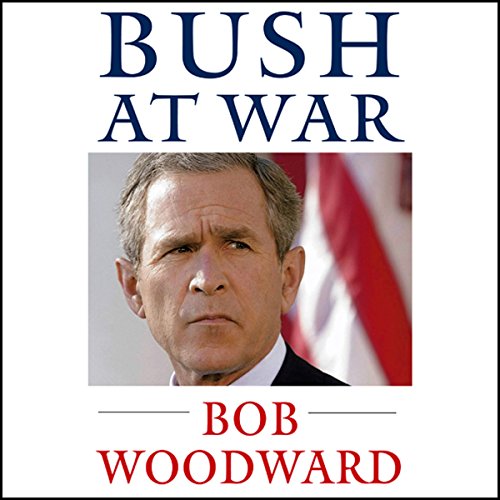 Written by: Bob Woodward
Narrated by: James Naughton
Try for $0.00

With his unmatched investigative skill, Bob Woodward tells the behind-the-scenes story of how President George W. Bush and his top national security advisers, after the initial shock of the September 11 attacks, led the nation to war.

Extensive quotations from the secret deliberations of the National Security Council - and firsthand revelations of the private thoughts, concerns, and fears of the president and his war cabinet - make Bush at War an unprecedented chronicle of a modern presidency in a time of grave crisis.

Woodward's virtual wiretap into the White House Situation Room reveals a stunning group portrait of an untested president and his advisers, three of whom might themselves have made it to the presidency. In Bush at War, Bob Woodward once again delivers a reporting tour de force.

"With rare access to the Bush White House, Woodward has again given us a masterpiece of political reportage." (Barnes&Noble.com)

What listeners say about Bush at War

A Thriller That Will Keep You Up Nights

I was stunned that so many of the principals talked to Woodward. He quotes people about what they were thinking which means that Rumsfeld, Rice, Powell, Tenet, even W. himself confided in Woodward. The result is fascinating. I learned that W. believes that he has a vision for this country, but doesn't actually understand the policies that he professes. God help us!

I can't stand Bush but the book was better than I thought. I came away with a new understanding of Rumsfield and Powell which I appreciated. I also didn't come out of the book thinking that our President was any less a reactionary macho cowboy than I did from observing the news and reading about him elsewhere. Even for Democrats or Bush haters this is a book worth listening to. I would never have purchased it otherwise but am glad I listened to it.

A very well written book. Not biased in any way. Not right wing nor left wing but an account of the 1st 100 days after September 11th. The book itself is more than a look into the Whitehouse at the time. It is truely a tribute to the people "on the ground". CIA, Special Forces, etc. To most American's, this is an untold story. There were many unknowns in the Whitehouse. The story is about an incredible cast of characters like Powell, Rumsfeld, Cheney, Rice, and other unknown (and still classified unknown) people who have kept this country safe for many years.

Bush at War is Fascinating

Fascinating description of what went on; in and around the War Room surrounding the events of Sept 11. A view of how decisions are come by and made in the Bush White House.

I am sure if Bush wrote this book himself he could not make it more flattering. That does not really say much since Bush could not write or read any book. But you have to appreciate writer's presumptions about reader when he wrote that US military was reorganized in a month from obsolete force to the most powerful military on the planet, specifically equipped for the modern battles. If you want to read good propaganda there are yet better, more saddle examples.

George Bush couldn't have written a more glossy and favorable profile of himself. This was surprising to me coming from someone synonymous with the Watergate discovery and investigation. Nevertheless, it was interesting to see the image the White House wished to project and how Mr. Woodward feigned objectivity while dutifully acting out the part of court historian.

More than a peak inside, this is sitting at the table! An eccellent job of capturing the thoughts, disputes, and concerns of the moment. How did the White House respond and react to the events of September 11th. Woodward lets the reader decide if Bush's methods are strengths or flaws. Also, you get the chance to see the groundwork for our current actions in the gulf to help put it in perspective.

From the cover and the title, I feared that this book had a GW bias. I didn't need to worry. Here, Woodward proves he can still be a powerful, objective writer. He has interviewed the likes of GW, Powell, Rice and others, and from those interviews, he has captured their thoughts and actions so that parts of this book read more like a fictional book with strong narrative. Without any apparent judgement, he has also captured some of the conflicts within the Oval Office in such a way that you can judge them for yourself. And I was amazed at the currentness of the information provided. This book starts on 9/11 and follows the War on Terrorism through to October 2002 with the start of the current efforts against Iraq. Excellent, informative reading.

Before the Iraq war began, I had hoped that the President and his advisors had more information than I and were making a well informed decision to invade Iraq. I was wrong. This book is wonderful at demonstrating how our elected officials and their advisors are just as human as we, and are just as likely to make emotional decisions with potentially disastrous results. This book compares well to Halberstamm's "Best and Brightest" about the Vietnam debacle. Woodward does a nice job of writing an objective account and avoids getting entangled in partisan arguments.

A balanced look inside the Oval Office

Woodward did an excellent job at providing excellent insight into Bush's way of thinking, often contrasting with his inner circle, but a very refreshing look.