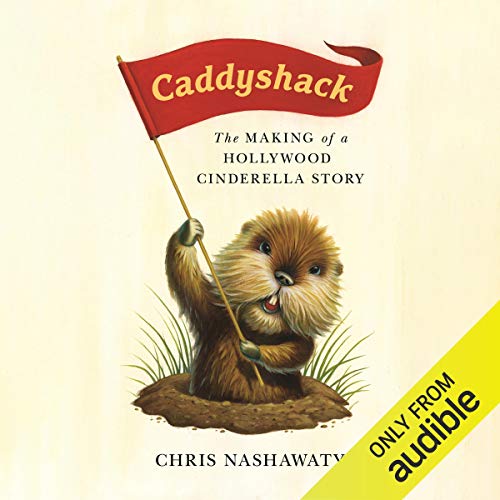 Written by: Chris Nashawaty
Narrated by: Peter Berkrot
Try for $0.00

Narrated by Peter Berkrot, an award-winning narrator, but perhaps best known for his feature role as caddy Angie D'Annunzio in Caddyshack.

"This is a tough, sharp history of comedy and competitiveness, of rising stars and brilliant upstarts. Of difficult egos, awful behavior, fragile friendships, bursts of inspiration, and blizzards of cocaine - told by the survivors and shaped by Chris Nashawaty's welcome insight and perspective." (Mark Harris, New York Times best-selling author of Pictures at a Revolution and Five Came Back)

Caddyshack is one of the most beloved comedies of all time, a classic snobs vs. slobs story of working-class kids and the white-collar buffoons that make them haul their golf bags in the hot summer sun. It has sex, drugs, and one very memorable candy bar, but the movie we all know and love didn't start out that way, and everyone who made it certainly didn't have the word classic in mind as the cameras were rolling.

In Caddyshack: The Making of a Hollywood Cinderella Story, film critic for Entertainment Weekly Chris Nashawaty goes behind the scenes of the iconic film, chronicling the rise of comedy's greatest deranged minds as they form The National Lampoon, turn the entertainment industry on its head, and ultimately blow up both a golf course and popular culture as we know it. Caddyshack is at once an eye-opening narrative about one of the most interesting, surreal, and dramatic film productions there's ever been and a rich portrait of the biggest and most revolutionary names in Hollywood. So, it's got that going for it...which is nice.

What listeners say about Caddyshack

Not Really About Caddyshack Until Hour 5

I went into this book expecting it to be about the making of Caddyshack. Something about the title seemed to imply it. What this book is really about is Doug Kenney, a brilliant but damaged mind behind National Lampoon, Animal House, SNL and Caddychack. I get the sense that this book was written to be that book but was changed to declare itself a history of the movie Caddyshack by the publisher.

Kenney's story is very interesting, which is why I gave the story five stars. it's just that I wasn't interested in Kenney's story when I paid for this title. it was a pleasant surprise but I imagine that's not so with some.

Once the book gets to Caddychack, it is as good a telling of that production's history as I have read. I do wish there was more to that section but, then again, this isn't really a book about Caddyshack.

The performance by Caddyshack cast member Peter Berkot (he played Angie Dinunzio, the recipient of Carl's Dalai Lama storytelling) does an admirable job but his impressions of the characters, particularly Bill Murray, were just off enough to throw me off.

It was an interesting book about the making of Caddyshack, but if you are only interested in the movie and it's actors the lead up may be a little much. It's probably half way through before it gets to the actual filming of Caddyshack. The majority of the time before that is spent discussing Doug Kenney, the main writer of the movie. That was interesting, but I was more interested in the actors I've seen hundreds of times in the movie and tidbits on what went on with them when the cameras weren't rolling.

My Favorite Movie of All Time

Even though I saw the Making of Caddyshack on TV, this book in Audible form gave me the history of National Lampoon, Second City, SNL, and my other favorite movie Animal House. Made me laugh and smile. One of the pleasurable books in many years.

I would have enjoyed this book a lot more if it were all about Caddyshack, but the first half of the book covers, the history of National Lampoon, Animal House and Saturday Night Live, all of which were covered in greater detail in A Stupid And Futile Gesture. The second half of the book is very good but I could have used more of it.

Some of the lines are fantastic, but 85% of this has been covered elsewhere. If one is looking for something short and a bit hair-raising vis-a-vis Doug Kenney, you could do worse.

Okay, but spends too much time on the background of the creators. That's been covered.

If You Don't Buy This Audiobook...

With a title like "Caddyshack: the Making of a Hollywood Cinderella Story", I wasn't expecting such a deep and illuminating dive into the origins of the National Lampoon. But it's what makes Chris Nashawaty's book worth that much more than just a 'making of' production story. This movie had some fateful consequences for the people who made it, and some didn't live to see this beautiful mess eventually become a beloved comedy classic. Framing it within the history of the National Lampoon gains us insight into the lives of the writers, performers, filmmakers, showrunners and entrepreneurs in its sphere of influence, and gives dramatic sweep to the actual making of Caddyshack, in which the winning streak of the pioneering comedic genius who started it all, finally dried up.

You can think of this book as a companion to the History Channel documentary "Drunk, Stoned, Brilliant, Dead", and the Doug Kenney Netflix biopic "A Futile and Stupid Gesture"; all three cover the same (to us comedy fans of the Boomer, GenX, and early Millenial generations, hallowed) ground---the beginnings of the Nat'l Lampoon as a shoestring publication which beat everybody to be first to have its prurient, well-educated finger on the pulse of a generation whose sensibilities had yet to be represented (or their id to be exorcised) in mainstream entertainment. Of course, one cannot tell the making of Caddyshack without telling the ending of Kenney. And one can't tell the story of Doug Kenney or his tragic finale without telling the story of how he, and fellow Harvard Lampoon alumnus Henry Beard created the National Lampoon, which had a similar effect on American comedy as to the apes touching the monolith in 2001. Burgeoning intelligence, combined with reveries of carnivorous feral anarchy ensued.

Kings were also made, as success mushroomed and the Lampoon's more combustible elements splintered off, seeding the birth of Saturday Night Live, even as the Lampoon itself turned its attention from the small page to the big screen. The record-smashing success of "Animal House", combined with the pop-cultural hegemony of SNL, kick-started and/or supercharged the careers of literally everyone who made all the movies an 80s kid like me loved as we grew up. It also gave a workaholic/beautiful dreamer, and adulation-addict like Doug Kenney an impossible task: how the hell does he top this? Was he good enough to outrun the genius of his past accomplishments?

"A Hollywood Cinderella story" was snatched from an improvised monologue by Bill Murray's mum-swatting groundskeeper in Caddyshack, but the title is well-fitting for this tale of the National Lampoon, and the people who made it. I've already dropped hints that Kenney's story did not end well. But even though he didn't get to live out his Cinderella story in the same way Harold Ramis did, the happy ending--however posthumous--is that we all get to enjoy both of their comedic legacies.

Interesting Insight into a Classic

This book give an interesting look into the making of a cult classic. One thing that I really enjoyed was the first couple chapters discussing the origins of National Lampoon and what started the careers of the now stars. A very easy listen with a great story.

Great listen for fans of the movie and its makers

I thought the book was thoroughly enjoyable and I listened through it learning much I did not know. Never knew so much about the background of the movie. Great nostalgia and new facts to learn. Excellent!

Oh my, if you love this 80s classic, then you'll love this behind the scenes book of the best movie ever. Given the non stop party scene, it's hard to believe they ever finished the movie and made it into the great classic. Great work!