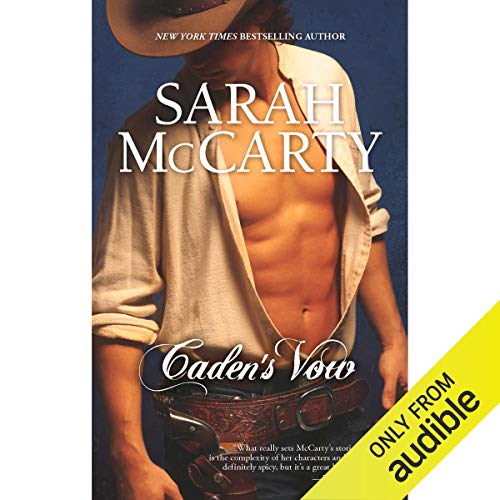 Written by: Sarah McCarty
Narrated by: Paula Hoffman
Try for $0.00

Gunslinger Caden Miller's compadres are becoming a bit too domesticated for his liking. So he's off to Kansas territory to carve out a living and a space of his own - alone, just the way he likes it.

Maddie O'Hare has been drawn to Caden ever since she escaped to the Hell's Eight compound from the brothel where she was born and raised. And she's not ready to let him go so easily…until she's captured by his new neighbors.

When Caden discovers that Maddie is being held by a rival at a nearby ranch, his plan to rescue her backfires, and he finds himself the groom in what's literally a shotgun wedding. As shocked as Caden is by the bizarre turn of events, Maddie's grateful kiss holds a fiery promise that's far more unexpected. But with old enemies catching up with him, Caden and Maddie will face a danger that tests their passion - and will either bind them together forever or break them apart for good.

What listeners say about Caden's Vow

Story not as good as the others. Narrator possibly could have made it better. The characters sounded like teenage hillbillies

I am a huge fan of Sarah Mccarty but this book was a let down. Not her usual story line. I would tell my friend to maybe skip this one.

The characters lacked depth and the story line was a little boring. So unlike her other books.

I thought the narrator was dry.

The narrator's attempts at male voices was hard to get past. The story needed more action as well.

The choice of a female narrator reading a male dominated story is truly unfortunate. Especially when most of the males sound the same and only slightly different from the females. They sounded like they were from hills of Tennessee not Texas.

What would have made this romance irresistible?

If it had been read by Jason Adams from Sam's Creed or Zoe Winslow from Caine's Reckoning. They brought the stories to life.

Not the quality of the prior books
Weak plot, weak writing, drawn out and only fair narrator.
Hate to see it go down.

This book was missing something. Not sure what it was but I hoped for more

If you’ve listened to books by Sarah McCarty before, how does this one compare?

Sarah McCarty has done better.I love her work but this did nothing for me.

I like the Hell's Eight Series, even though I'm not into some of the sex. Historical Westerns are not that plentiful on Audible. I liked this one and I'll probably listen to it again, I just didn't like it as well as the first few, so I only gave it 3 stars. Still, I would buy it again.

I had to struggle to get through this book, and initially, I thought it was because I lacked an interest in the heroine but nope- it's just not up to the same quality as Sarah's other books. This was not helped by Paula Hoffman. She needs to practise, perhaps take some acting classes-SOMETHING! There is a difference between reading a story and making the listener feel like they are in the story. She physically can't sound like a man( she tried and it was an epic fail) nor is she able to create that place where you know you are listening to a woman speaking as a man but it works anyway. Given how these stories are about strong, sexy men that have had a ton of life experience, there was a lot of short-changing going on. Even her attempt at accents was ridiculous making them sound like they came from 'Nowhere Specific, USA' rather than Texas or even the South. I will purchase the next book in this series if Paula isn't reading it, as I am confident that Sarah will come through with a better book than this one- she had five that were awesome, and every author drops the ball sometimes but I will never again buy a book that Paula Hoffman reads.

Not up to the mark

I had been wondering about the final 3 characters in the Hell's Eight series as they are very side line mentions in the first novels. Not that engaged with them even now. This felt more like "well, I did say eight so I have to deliver...."

The narrator really did NOT help. Her efforts at doing a male voice = FAIL.
They all sounded terrible. I would have preferred she just read the story as her speaking voice was pleasant.

I hope the next Hell's Eight character gives Ms. McCarty a more catching story to present.

Would you try another book from Sarah McCarty and/or Paula Hoffman?

I would definitely buy another Sarah McCarty book, but only because I've read/listened to other books by her and know she can do much better than this. Unfortunately, I wouldn't be eager to purchase another book read by the same narrator... She made the characters sound like children.

Would you ever listen to anything by Sarah McCarty again?

This book was all sorts of odd to me. Seems to me Maddie shouldn't be marrying married at all, but instead checking into some western residential facility for those considered'touched' in the head. From the start I had the hardest time figuring out how anyone could get to know her enough to fall in love with her... She barely spends time in reality, constantly 'slipping away'.

Keep Them Coming I Love This Series

Yes, it was an interesting storyline with memorable characters.

What does Paula Hoffman bring to the story that you wouldn’t experience if you just read the book?

I like most narrators, this one is no exception-good job.

Was Caden's Vow worth the listening time?

It sure was. I've listened a few times.

Some reviewers are disappointed, I'm not sure why. It seems to be similar to the rest of the series.

I'm not a 'historical' romance fan however this series is an exception! Good plots, hot romance-language & scenes for adult readers.

When is the next story

What did you love best about Caden's Vow?

Two people who think they are not worthy find they are.

What was one of the most memorable moments of Caden's Vow?

Which character – as performed by Paula Hoffman – was your favorite?