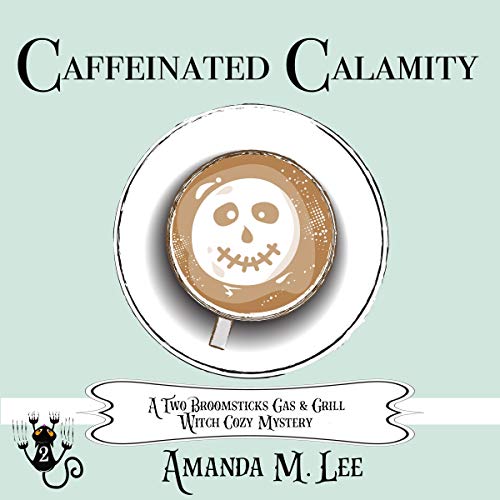 The only witch in the world? It might feel like it to Stormy Morgan, but she knows better.

Twenty minutes away, in a town called Hemlock Cove, witches have taken over. Sure, the bulk of the town is made up of frauds looking to shore up their tourism industry, but there are real witches, too. There’s a family with the last name of Winchester, and they’re notorious. Stormy wants to meet them, but she has a myriad of problems darkening her doorstep.

The first is Hunter Ryan, her childhood love who is back in her life and ready to take the next step, which is formal dating...just as soon as he’s given proper respect to his previous relationship. While Stormy is waiting for that to happen, she runs to the aid of customer at the family diner when the older woman collapses as she’s leaving after breakfast. Before Stormy can offer even a dollop of help, though, the woman is dead, and there are more questions than answers.

When the cause of death is determined to be poison, Stormy and Hunter have to follow a tangled trail of clues, and it leads them straight to the senior center. It seems the victim was a regular visitor there, and one of the better euchre players at the lauded weekly tournaments. Is that a motive for murder, though?

Stormy has her hands full with out-of-control euchre madness, magic she is trying to control, and hormones that are threatening to run rampant. When she finally makes it to Hemlock Cove, her nerves threaten to get the best of her.

She needs help. This is a world she doesn’t understand. The truth has to come out, but is she ready? It might not matter because a murderer has marked Stormy for death. It’s up to her and her motley crew of friends and family to save the day...if they can all come together as a team.

That will be easier said than done.

What listeners say about Caffeinated Calamity

fun!! love the new series! didn't like the weird voice the narrator used for chief Terry, but it is a cross over and not the same narrator at the Wicked Witches of the Midwest series, so will leave it as just a little odd. loved the story and the crossover theme.

THIS BOOK AND SERIES ARE QUICKLY BECOMING ONE OF MY NEW FAVORITES. I WAS LISTENING LAST NIGHT BEFORE GOING TO SLEEP AND LAUGHING SO HARD I SHOOK THE BED. THESE CHARACTERS ARE SO REAL, THOUGH STORMY'S MOM NEEDS TO DIAL IT BACK A BIT. I AM GLAD WE DON'T HEAR TOO MUCH FROM HER. I CANNOT WAIT TO SEE WHAT IS IN STORE FOR STORMY, HUNTER, SEBASTIAN, AND ALL THE OTHERS IN FUTURE BOOKS. KEEP 'EM COMING, AMANDA!

I stumbled across this book a while ago and just enjoyed the characters and the storyline. the character development really made me laugh and I was looking forward to the next book. I'm so glad there's another one I can't wait for the third the characters are witty and funny and I would probably hang out with them!

This is the second book in the series. Amanda M Lee has done a wonderful job. The character development was really well written. Lots of fun witty moments in the book plus you get to meet the Winchesters! Definitely looking forward to the next installment. I really like the narrator for the series as well.

I absolutely love of her books because the characters are unique and so funny. I laugh out loud with every book I read.

I hope the next book is released soon.

I hate when you like a book and it ends. it lets you hanging and wanting for more. I enjoyed this book and I can't wait for the next one.

I enjoyed this book however not as much as I enjoyed the 1st book in this series. Sometimes the author focuses too much on details irrelevant to the story which I find a tad annoying at times. I also reaaaaally do not like the timeline from book 1 to book 2...seems the entire span of book 1 and book 2 is a mere matter of weeks. Just seems extremely unrealistic that multiple murders would take place in this small town that only has like 3 cops max in 1 - 2 weeks. The narrator is decent, however, a few of her characters sound very similar and it can get confusing.

The first book in this series, was ok. I love everything Amanda M. Lee has written, I own most of them in audible form. I’m on the third and we are FINALLY learning how Stormy Morgan is a witch. All her anxiety and hemming and hawing is sort of explained. In my opinion, this second installment is a waste of money and time, with the exception of Hunter. Listen to it if you like but I think I will return it.

I absolutely love this book and I’m hooked The characters are fun and interesting . I’ve been an Amanda M Lee fan for years and I think this is going to be her best series yet.

Caffeinated Calamity is a fun an entertaining cozy mystery. I can't wait for the next book.