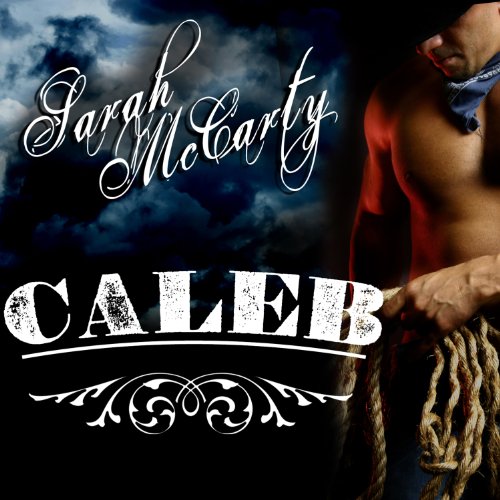 Written by: Sarah McCarty
Narrated by: Tavia Gilbert
Try for $0.00

The loss of control. The fear of desire. Allie always thought that mysteriously sexy rancher Caleb Johnson wanted her as much as she wanted him. But since he never acted on it, she was ready to admit defeat. Until the night she was attacked by a vicious wolf, only to be rescued by another. In the triumphant, bloodied male, there was something Allie recognized - the baritone growl, the mesmerizing eyes, the inexplicable animal attraction. Her savior was Caleb.

A rogue vampire living with his three equally rogue brothers and the McClaren werewolf pack, Caleb never wanted to bring the woman he secretly desired into his dark and dangerous world. But when she's targeted by his enemies, his only choice is to protect her. But how can someone as alive, as vulnerable, as human as Allie survive in the shadows with him?

"A fast-paced story with multifaceted characters, scorching sex, deadpan humor and a spunky heroine who's a perfect match for her alpha hero." ( Romantic Times)

What listeners say about Caleb

The reviews were so positive! I was expecting something delicious. I agree that Sarah McCarty has talent, but this book's plot sinks into an unispired circle of Vampire cliches that bored me to distraction.
"I won't drink blood." "You MUST drink blood."
Thirty pages later, I couldn't care less. There has to be a difference between conflict and bickering, otherwise, I'm not on board.
Just bored.
Read Anne Stuart

I was excited to see a new vamp series, especially one with such great reviews, but I honestly was disappointed. Tavia Gilbert narrated, and as usual, was amazing, but it just wasn't enough for me. Some parts were dragged out unnecessarily and others, like some of the battle scenes, were run through so quickly it was over before I knew what was what.

This book might have been better if read, but as an audiobook, it didn't rock my socks.

Usually there is a story or plot along with some bedroom activities, just to add a little more exotic interest. But, nearing the end of the first half of the book, I realized there is an abundance of bedroom gymnastics, but a total lack of interesting plot or even an interesting character. I won't be finishing this one.

The narrator tries to do a good job with her part, but it's not her fault that there is nothing but junk to read.

Really?? this book was ridiculous. The story was too stupid for words. As much as I love Tavia Gilbert and she is one of my favorite narrators this book was awful. The voice she used for Caleb sounded like a creepy cowboy that you see on TV playing the bad guy. ugh Total waste of time and credits. I will not listen to the rest of this series. I could not even finish this book mostly because of the story itself not the narrator. I did get to chapter 7 before finally deciding I wanted to shoot myself in the face if listened any further. Dont get me wrong I am a huge fantasy vampire fan, but this was just freakin Stupid. Sorry Sarah McCarty.

This was absolute torcher!

no one should listen to this book.

What could Sarah McCarty have done to make this a more enjoyable book for you?

frankly there was so much wrong, i was not salvageable at anytime. i wish she had scrapped it.

Have you listened to any of Tavia Gilbert’s other performances before? How does this one compare?

i have never listened to her before but i did enjoy her voice and performance but the story itself was so awful there was nothing she could do to make it better.

This was sadly my first Sarah Mccarty book. I read such great reviews on amazon for some of her other books. I wish i had checked out the reviews for this one. I was shocked anyone on audible gave this a 5 star. Nothing was likable about it to me, exccept maybe the narrator, she was good i liked her voice and she performed it well but the story was so awful there was really nothing she could do for it. My god the last half of this book was like extracting teeth to get through it. I honestly thought if I could just finish it then maybe the next books in the series would be better. I can say the first quarter of the book was ok, i figured i would grow to like the characters at least a little. Alli had potential but in the end they both were just...there just was such a lack of love and personality for caleb, he was not even likable to me. lust yes but to be honest even the love scenes were just a snoose and seemed unfinished, i assume i felt this because i never did get to the point where i liked the 2 main characters. Also, the author used the word talon or talons i swear hundreds of times in this book more often than the word THE or SHE...god it was just torture.

The author never really explained anything, why the vampires turn into wolves, where the loyalty from the pack comes from... and frankly, to me a cowboy is some one who runs cattle, grows crops, or breeds horses...do these men even do any of that? i dont remember that even being explained. it seems to me the only qualifying thing allowing her to call them cowboys is that they wear cowboy hats and live on a

If your a vampire lover and if you love cowboys, well this might be your book. I definitely caught my attention. Oh and let's not forget those werewolf's. It has a interesting plot that will lead you into the next book with the other sexy cowboy vampire brother, which will lead to the other sexy cowboy vampire brother... you get the drift. It's a road that I, at this point, want to take. So yes it's worth a credit to me.

Has Sarah gone off the boil?

I got sooooooooo excited when I realised there was another Sarah McCarty series to folllow so gladly gave up a credit. I did NOT love this one and it's put me off the rest of the series. While I managed to get through the book at times I was bored with it as I just did not bond with the characters as I had with main charaters of the first 4 Hells Eight guys.

If Audible gave Refunds, this is my 1st Request

Ok, first I never bash a book. Check out my reviews and you will see. This book was really really terrible. Its the first book I couldn't finish. Even my husband who is an avid reader and writer came in a time or two and asked me what I was listening to, followed with an astonished "Why". I admit, I waited it out hoping it would get better. I finally turned it off unhappy and unsatisfied. I never understood where the author was taking me. The book seemed focused on a strange love and transformation of the main character, and the sexual relations of the two after that. I love a good love story and am open minded when it comes to sex, this was not good at all. The plot was underdeveloped at best, and the characters lacked depth. I am sorry if this book appeals to you, and would love to hear what people liked about the book. For this was the worst pick of the year. If I could ask for a refund or credit on any book in my library of more then 100 audio books this would be the one I'd pick hands down.

Ok... Can you say Suprise! OMG! I was not expecting this... No seriously Not at all. I only pick this book because of the narrator. I am becoming a fan of Gilbert/Frost, so I came across this and was like now way... cowboys! ummmm NO! Right... but I took a chance...

This was sooo good! I don't know if it was because of the the narration...but wow! I ususally tend to stay away from paranormal vamp books because no one can do the right but Frost, and a very few others... but McCarty nailed it... these Cowboy Vamps and their wolf packs were simply hilarous! I loved every single bit of this book. I hardly ever listen to a book without fast fowarding... and I think I only fast fowarded like four time...just because I was so excited to see whats was going to happen... not becauce I was bored... and I did it like at chapter 2, at one pt... when Allie is being chased by the wolves before she gets to the circle J... get this and you will know what I am talking about... then when the brothers use Allie to bring back Caleb... OMG! I was freaking out! Then when .... Omg! I can just keep going... this book was just sooooo goood... I loved it.... Then... Allie gets kidnapped... OMG! Whew!

Suprise Suprise... I haven't been entertain is a long time.. and the smex! Hottty! Hotty! Right out of the gate too... well worth the credit... I ended up buying all four books in the series... I hope McCarty writes a book about the wolf pack next....

Narration... well we all know why I got the book orginally... Narration was awesome...

I enjoyed McCarty's Hell's Eight Series. Not classic literature, but most were quite a bit of fun. I was reluctant to try the Shadow Wrangler books. Not a big vampire fan and not into blood and gore. In a moment of weakness though I gave it a shot. Definitely not classic literature and definitely not fun. The scene in the dark in bed after the heroine has turned was confusing, way too long and just plain boring. I couldn't read on after that. Won't read anymore of the series.