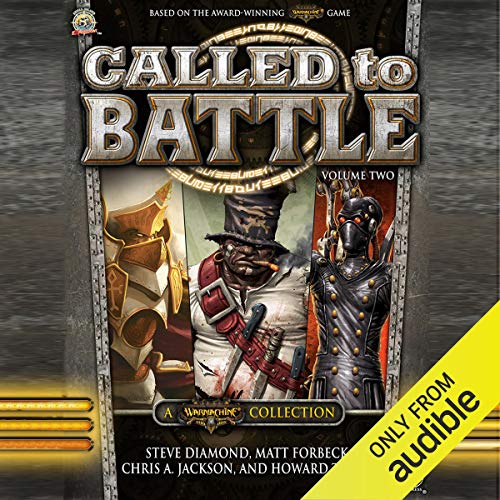 The Iron Kingdoms is a land dominated by mighty warcasters, arcanists who command the terrifying war machines called warjacks. While these epic figures lead armies and shape the futures of their nations, other powerful individuals, no less skilled, forge their own destinies in steam and steel.

Called to Battle: Volume Two is a collection of stories focused on the Iron Kingdoms' greatest heroes, its skilled mercenaries, and even the horrifying villains who haunt its darker reaches. Journey with High Paladin Dartan Vilmon as he and his paladins fight their way across western Immoren on a most holy mission in "Conviction" by Steve Diamond. Witness the infamous alchemist and inventor Gorman di Wulfe use his staggering intellect to try to escape the consequences of a murder accusation in "A Casualty of Science" by Matt Forbeck. Trace the origins of one of the most feared members of the pirate ship Talion, the sawbones and ship's cook known as Doc Killingsworth, in "Flesh & Bone" by Chris A. Jackson. Discover the terrifying surgical augmentations of the enigmatic creatures called the Cephalyx as they perform their ghoulish experiments on a captured squad of Cygnaran trenchers in "Mind over Matter" by Howard Tayler.

These stories draw you deeper into the war-torn landscape of western Immoren and the Iron Kingdoms, where heroes, villains, and those somewhere in between find themselves Called to Battle.

What listeners say about Called to Battle, Volume Two

To Short the Storm

All excellent stories and the narrative was very good. I wouldnlike to soee lingrr version of a few stories only to counter act the price paid for such a short series of adventures.

double the lengths or decrease the price and then it woukd be a mych better experience.

The stories are all worth the ride on the storm of adventure but the length was only that of a squall.

Good stories, but not the best from WM.

I enjoyed the stories, but they seemed shallow in comparison to the first Called to Battle.