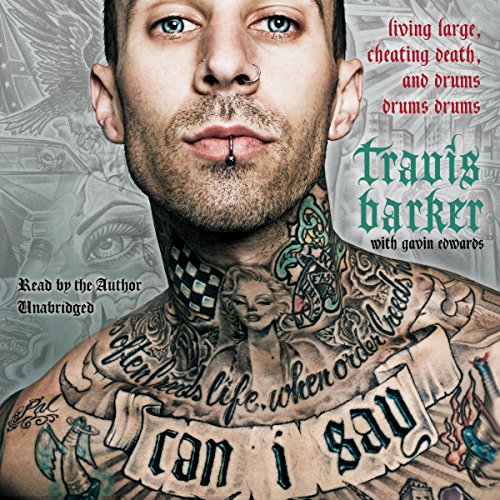 The fascinating never-before-told-in-full story of personal reinvention grounded in musical salvation and fatherhood.

Travis Barker's soul-baring memoir chronicles the highlights and lowlights of the renowned drummer's art and his life, including the harrowing plane crash that nearly killed him and his traumatic road to recovery. After breaking out as the acclaimed drummer of the multiplatinum punk band Blink-182, everything changed for Travis Barker. But the dark side of rock stardom took its toll: His marriage, chronicled for an MTV reality show, fell apart. Constant touring concealed a serious drug addiction. A reckoning did not truly come until he was forced to face mortality: His life nearly ended in a horrifying plane crash, and then his close friend, collaborator, and fellow crash survivor, DJ AM, died of an overdose.

In this blunt, driving memoir, Barker ruminates on rock stardom, fatherhood, death, loss, and redemption, sharing stories shaped by decades' worth of hard-earned insights. His pulsating memoir is as energetic as his acclaimed beats. It brings to a close the first chapters of a well-lived life, inspiring listeners to follow the rhythms of their own hearts and find meaning in their lives.

What listeners say about Can I Say

Made me dislike Travis Barker

This book is simply the authors attempt to give himself recompense for decades of childish behaviour. I always liked Travis Barker until this book. It’s amazing how someone can play the victim for bad decision after bad decision. Congrats. You can hit drums in a decent rhythm, maybe work as hard on not being a shitty human as you do on playing drums.

It was a good book but it was a bad narrator choice. Felt it wasn't suited for the style of book and for the subject. A different narrator would have made this book a much better listen!

Better if Travis narrated it!

Only complaint is that it wasn’t read by Travis ; that would have been amazing. It just doesn’t land right with this narrator.

Excellent Memoir. Horrendous Narration.
Narrator does not flow well with the story at all. Big let down that Travis did not narrate the book himself. Would have been awesome.

very well narrated and if you know anything about Travis Barker you know this book won't disappoint!

What a cool glimpse into the life of a famous drummer. The road to success - the sex, drugs and rock stars. It’s cool how Travis is such a great human and interesting to hear how each turn of events has created him to be who he is.

Couldn’t even finish it.

The memoir no one needed with the absolute worst choice of narrator for the material. Couldn’t tell when the switch from guest commentary and first person happened. Almost impossible to listen to. Very frustrating.

bullet points, not a book

I really wanted this to be interesting. It's not!
Actually irritating to listen to.
Dull storytelling.

It’s a great book full of stories from Travis Barker. The narrator does make the story difficult to follow if you aren’t paying attention. Also a mega let down that Travis didn’t narrate it himself. Overall I would recommend the book to anyone that has followed any of his career

Good book, was hoping Travis would had been the one reading it but it's got great details.

Essential for any Travis Barker fan

I took my 23&15 year old sons to see Blink 182 a few years ago and loved it! Music choices in the car with my boys can be a challenge but Blink is a band we can all agree on. I learned a lot about Travis from this book. It's amazing that Travis survived not only the plane crash but all of the physical pain that accompanied it. Also finding out how humble and down to earth Travis is just makes him even more likable to me. I definitely recommend spending a credit on this book. The only thing I wasn't excited about was the narrator. His performance wasn't bad but something about his voice and tone made me think of state farm commercial's. IDK maybe it's just me but I think it would have been easier to listen to if someone else had narrated it.

The narration was painful at best. It's KILLING me

Maybe it gets better, but I am at chapter 4 and honestly do not want to continue listening. I presume it would have been better if read by the actual author. (MAYBE)

Personally I rate all memoirs less when the author doesn't narrate it themselves. It just makes it feel lazy, somewhat entitled, and like paying full price for dollar store value.
So far, the return on investment is too low for my taste.

***I DO HOWEVER hope this book gets better!*** Currently, it's boring as all hell and extremely presuming... just because you have fame, doesn't mean people want to hear pointless drivel that doesn't promote the actual story line.

I don't know anything about the narrator, and he could quite possibly be really good at his performances otherwise. This book however, he missed the mark, a lot. It was confusing transitions between characters, and he never embodied the true energy of the author. Maybe it's because the book (SO FAR) is most definitely lacking any intellectual writing and feels "middle-school-level-literature" at best.

I AM ONLY ON CHAPTER 4 --- This COULD redeem itself. (Just feels like an impossible feat)

I lost interest in this a few chapters in. The way it was written I would have thought a child wrote it. He started off on one subject and two sentences in he talked about something that had nothing to do with it and then went right back to the subject he started with. I'm surprised it was accepted to be published with the way it was written.

Where does Can I Say rank among all the audiobooks you’ve listened to so far?

Definitely one of my favorite autobiography's by far! Started it and couldn't stop.

What was one of the most memorable moments of Can I Say?

The most memorable moment was the plane crash. It was hard to read.

My favorite part of the book was Travis talking about growing up.

Didn't like the narrator. His voice would do weird changes at times, especially when he was reading for somebody else.

I know why Travis didn’t narrate. I don’t think he could of after listening to his story. I think he is too shy and not arrogant enough. I did think it was kind of funny that he would have others talk about how great he is then Travis boosting about himself.
Yes, it was not well written but Travis is not a scholar, he is an artist through and through. But the story is real , gritty and honest. I am glad I listened. But my only complaint was when Travis would let you know there was a quote from a friend or an ex wife, but failed to end the closed quote and would not know when the quotes ended and his story continues. It was a little frustrating to constantly trying to figure out who was talking.

Good story. Good look into the life of someone who is trying to be normal and a rock star at the same time.

Not too deep, horrible narration

Narration so bad I was lost because I didn't know who was talking. Surface story.

good story would be better if different

The person reading took away from the story. it was odd listening to a many read wome s parts etc