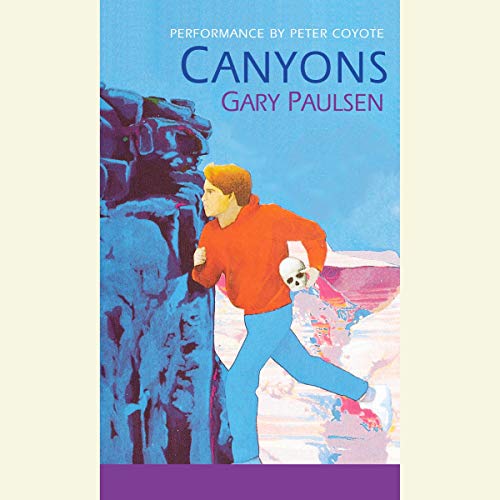 Written by: Gary Paulsen
Narrated by: Peter Coyote
Try for $0.00

Two boys, separated by the canyons of time and two vastly different cultures, face the challenges by which they will become men.

Coyote Runs, an Apache boy, takes part in his first raid. But he is to be a man for only a short time.

More than 100 years later, while camping near Dog Canyon, 15-year-old Brennan Cole becomes obsessed with a skull he finds, pierced by a bullet. He learns it is the skull of an Apache boy executed by soldiers in 1864. A mystical link joins Brennan and Coyote Runs, and Brennan knows that neither boy will find peace until Coyote Runs' skull is carried back to an ancient sacred place.

In a grueling journey through the canyon to return the skull, Brennan confronts the challenge of his life.

"Paulsen involves readers so deeply in the lives of both characters...that the whole becomes a compelling and dramatic experience that is powerful stuff.... New and unforgettable." (School Library Journal)

What listeners say about Canyons

A childhood favorite lives on!

My mother bought this book for me when I was 10. After reading it I found the audio cassette tape in the local library and instantly fell in love with it. Not since the BBC production of the Lord of the Rings had I been this hooked to a story. Peter Coyote, who in my opinion is an overlooked actor for his accomplishments over the years, delivers a wonderful atmosphere for this story. Well worth the purchase!

A little different for Gary Paulson

It was a good story....a bit dark for Paulson. It was interesting and kept me listening.

Wonderful for the Family

I used recordings of Gary Paulsons books to help my son learn to read 30 years ago. Canyons is a family favorite. . I have it in paperback, cassette tape ,CD and now downloaded to my library. My husband and I just listen to it on our way home, probably the 20 th time to listen, still a wonderful story for all ages.