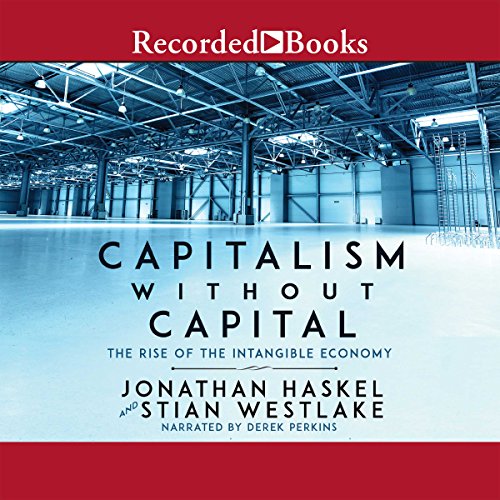 Early in the 21st century, a quiet revolution occurred. For the first time, the major developed economies began to invest more in intangible assets, like design, branding, R&D, or software, than in tangible assets, like machinery, buildings, and computers. For all sorts of businesses, from tech firms and pharma companies to coffee shops and gyms, the ability to deploy assets that one can neither see nor touch is increasingly the main source of long-term success.

But this is not just a familiar story of the so-called new economy. Capitalism without Capital shows that the growing importance of intangible assets has also played a role in some of the big economic changes of the last decade. The rise of intangible investment is, Jonathan Haskel and Stian Westlake argue, an underappreciated cause of phenomena from economic inequality to stagnating productivity. Haskel and Westlake bring together a decade of research on how to measure intangible investment and its impact on national accounts, showing the amount different countries invest in intangibles, how this has changed over time, and the latest thinking on how to assess this. They explore the unusual economic characteristics of intangible investment and discuss how these features make an intangible-rich economy fundamentally different from one based on tangibles.

Capitalism without Capital concludes by presenting three possible scenarios for what the future of an intangible world might be like and by outlining how managers, investors, and policymakers can exploit the characteristics of an intangible age to grow their businesses, portfolios, and economies.

Author bio: Jonathan Haskel is professor of economics at Imperial College London. Stian Westlake is a senior fellow at Nesta, the UK's national foundation for innovation.

What listeners say about Capitalism Without Capital

A must for leaders of developing countries

I read (listened to) Capitalism Without Capital per recommendation by Bill Gates and I agree with the overall ratings I have seen for it. At first the book seemed slow and rather bricky, however as technical explanation passed and the author touched on the dynamics of economy in the age of intangibles, I really enjoyed. When discussing about infrastructure and legislation to facilitate growth, I kept thinking I wish the new president of my country read this book.

To the end the reading becomes dull again, but I must say that this is still, one of the best paced and entertaining books of economics that I have ever read. #Audible1 #IntangibleEconomics

Three chapters in and pretty disappointed with this book.
If have never heard of intangible assets or IP or Goodwill or the knowledge economy in general, maybe this book is for you. Sorry.

Challenging, but thought provoking and educational

Fairly challenging for someone not familiar or passionate about economics but still very relevant and rewarding for readers from any background.

Great book. Need to put close attention if you are a newbie in the category.

not very good at creating a relationship with the reader as the subject matter is very dry and not a lot of effort into putting real world examples that relate on a more human level.

In addressing 21st century technology, Haskel and Westlake argue that the tradition of hard asset value is diminished. In today’s technological economy, the authors suggest investment in intangibles is as important as investment in buildings and machinery.

Haskel and Westlake acknowledge intangibles have always been an important part of economic growth. They note worker training programs, specialized employee’ experience, and patented designs have always had value; but auditors rarely (if at all) quantified those intangibles as anything other than expense. Little of a company’s investment in training, employee experience, and patents is assigned as an asset by analysts who use pre-twenty-first century accounting rules.

Most intangibles have historically been classified as uncapitalized expenses. In part, because quantification of intangibles is difficult to measure. Before the tech-revolution, investments in training, patents, and experience were looked at as costs of doing business. They were most often expensed (with some exception for patents).

Would you consider the audio edition of Capitalism Without Capital to be better than the print version?

No. Print might work better because of the complexities of the subject

There were no characters. This is a book about economics. You need to refine your algorithms in your software.

Which character – as performed by Derek Perkins – was your favorite?

?? The dollar? Money? What on earth do you mean?

Only an idiot would make a film of this book. Who thought up this question?

You need to work on your software. Your questions are stupid.

Excellent insight into this part of the economy

Excellent insight into a valuable part of the economy which is often hidden from sight.

Must read for anyone who works in IP/technology

A primer on the economy as it exists today.

Intangible investments affect the economy differently. How companies access capital, invest capital, measure value, and manage resources are critical. Brand and intangibles are where most of the value lives.

very interesting subject on a great analysis of it. repetitious and dry at times. nevertheless worth the read

my formal training is in Theology with an emphasis on leadership and missions.

I found a great deal of clarity to help me better apprehend this world where value is added in what I know, not in what I do.

This book has helped me better serve my clients with confidence and focus.

I expected much more from this book, namely a more exciting exploration of topics. I found it to be a review of the familiar... although, it is not devoid of value.

How do we Quantify Intangibles in an Economy?

When it comes to hard numbers of performance, few of us outside of professional sports or sales are comfortable with letting hard metrics capture the nuance and quality of our work. Haskel and Westlake outline the challenges of documenting and gauging performance of a world economy that is trending more and more toward intangibles. Where industrial economies were quantifiable in terms of widgets per unit time, the output of modern economies are defined in terms of patent portfolios, licensing, contracts, options, brands, copyrights and a wide variety of intellectual property. This book strives to understand what we should consider in an increasingly intangible world.