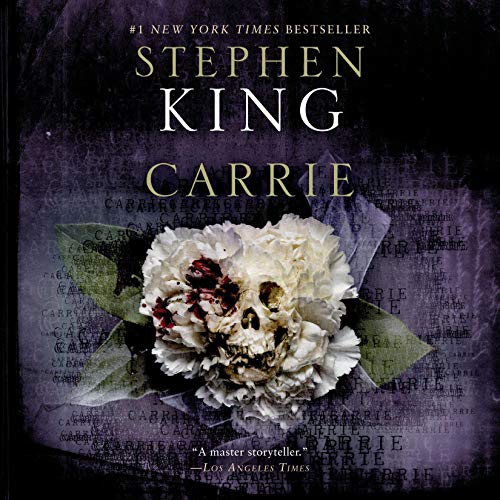 Written by: Stephen King
Narrated by: Sissy Spacek
Try for $0.00

An unpopular teenage girl, whose mother is a religious fanatic, is tormented and teased to the breaking point by her more popular schoolmates. She uses her hidden telekinetic powers to inflict a terrifying revenge.

"A master storyteller." ( The Los Angeles Times)
"Guaranteed to chill you." ( The New York Times)
"Gory and horrifying.... You can't put it down." ( Chicago Tribune)

What listeners say about Carrie

A classic begging to be read.

Stephen King is a master at taking us into the young minds of impressionable teens.

One of my favourites

What a great job the narrator did!!! This was my first audio book and I am absolutely impressed

One of the best audiobooks I've heard. Very well done. Loved every minute of it.

Carrie was a pretty good book, well written, and Spacek narrated wonderfully. not sure i would listen again but overall a thrilling and adrenaline filled experience.

The movie "Carrie" has always been one of the Stephen King stories that I thought they did a great job adapting, not because I had read the book, but because the movie is really well done. Well if you're about to read or listen to "Carrie", oh boy are you in for a treat. It's amazing! The movie tells the story of Carrie. The book is Carrie and owns her secret language, the language we all speak with our thoughts and actions.

The book reads like a case study of this incredibly odd event. It's told from multiple points of view from witnesses and has so much more detail. The horror factor is very high.

Sissy Spacek is an amazing talent. Not only is she a fantastic actress, she's a perfect narrator. I would listen to any books she reads, just to hear her talk. I'm so impressed with her and the entire production.

Where does Carrie rank among all the audiobooks you’ve listened to so far?

I would say it is a top 20. Stephen King stories are excellent and the reader was able to show great emotion.

Would you listen to another book narrated by Sissy Spacek?

I have and would again, I just wish Sissy Spacek knew how to pronounce Desjardins.

I was actually the most moved by the forward by Stephen King himself explaining where the idea for the novel came from and his regret over not helping the outcasts who were bullied in his youth. Made me think a lot more about it and possibly my own ineptitude in the past.

I consider myself a big King fan, but as such I'm only slowly making my way through his works.

Carrie has made it's way to the top. As I know it's his first, I was almost shocked at how much I enjoyed it. I have seen the classic original movie, but I definitely prefer the book. Its darker and heavier.

The best of Stephen Kings books, and to think he a

Where does Carrie rank among all the audiobooks you’ve listened to so far?

The best so far

How detailed it was, it actually made you connect to the characters and understand the unfolding of a tragedy

Have you listened to any of Sissy Spacek’s other performances before? How does this one compare?

She is great, and considering she starred in the original movie, I think she connected to this book in a personal way

The ending, when Sue and Carrie were together. A moment of what I felt was guilt, love, and friendship, and perhaps for Sue growing up.

I actually watch this film when it came out. It was terrific in it's time. I also have read most of Stephen Kings books, including this one years ago. I couldn't resist listening to this book again especially with Sissy Spacek as the reader. Despite the fact I read it years ago, it was more enchanting and captivating then before. Perhaps because I was about their age when it came, out, and years of life can give you a new sense of understanding. I don't see Carrie as a horror book or movie, I see it as a tragedy. And just how cruelness to others can bring out the worse in people who are actually good, but pushed to the brink of madness.

I really loved the story itself. But the production was ok. sometimes I struggled to tell the difference between characters being voiced until 3/4s through the book, then the performance was Abit better. The quality of the recording was okay at best. white noise could be heard through the entire story.

Wonderfully written; what horrified me was not the supernatural aspect but the natural: Humanity itself .

The narrator was amazing! I enjoyed the book over the movie though the movie is the good.

“Sorry is the Kool-Aid of human emotions. It's what you say when you spill a cup of coffee or throw a gutter ball when you're bowling with the girls in the league. True sorrow is as rare as true love.”
― Stephen King, Carrie

There is a giant, dark gap in my reading history where Stephen King belongs. I've read a couple of his mid-career "also" novels (The Dark Half, Needful Things, etc). Some of his better known novels seemed a bit like a redundant read. They have soaked into the collective consciousness. But there is also this strange magnetism of his work. I don't want to just know 'Carrie' by the movie (or I guess movies and a musical is more technically correct). I want to read it clean and clear. So, I've been waiting patiently and now I've finished 'Carrie' and it was about what I expected. This, the earliest of King's novels, shows clear sign that King was always more than just your run-of-the-mill hypergraphic. He possesses/ed a certain vision and creative ability to mine all the dark, dank and soft corners. He recognized early that true horror isn't born from just blood or a knife, but from the emotions and fanaticisms and the brain.

Anyway, I liked it. I'll probably now have to read/listen to 'The Stand', 'The Shining', 'Cujo', and a handful of the other pillars of horror thrown upon us by Maine's Dark King.

Classic King, classic story and narrated perfectly by Carrie herself Sissy Spacek. A+ A+ A+

king hasn't yet let me down and the story was great, but the narration was ok, I'm not saying she did a bad job but the whole time there was this white noise in the background as she was reading so if thats something that bothers you then I would see if they have another version