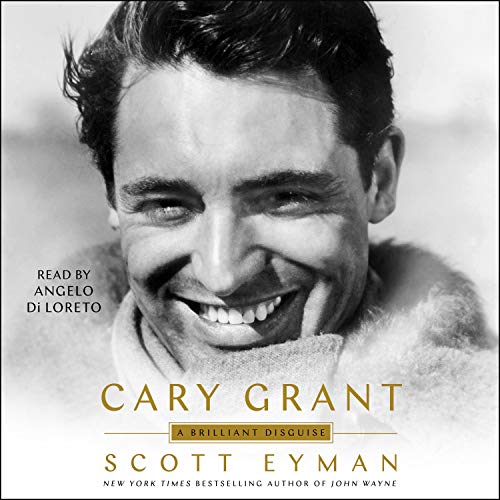 Film historian and acclaimed New York Times best-selling biographer Scott Eyman has written the definitive, “captivating” (Associated Press) biography of Hollywood legend Cary Grant, one of the most accomplished - and beloved - actors of his generation, who remains as popular as ever today.

Born Archibald Leach in 1904, he came to America as a teenaged acrobat to find fame and fortune, but he was always haunted by his past. His father was a feckless alcoholic, and his mother was committed to an asylum when Archie was 11 years old. He believed her to be dead until he was informed she was alive when he was 31 years old. Because of this experience Grant would have difficulty forming close attachments throughout his life. He married five times and had numerous affairs.

Despite a remarkable degree of success, Grant remained deeply conflicted about his past, his present, his basic identity, and even the public that worshipped him in movies such as Gunga Din, Notorious, and North by Northwest.

Drawing on Grant’s own papers, extensive archival research, and interviews with family and friends, this is the definitive portrait of a movie immortal.

What listeners say about Cary Grant

I have enjoyed listening to this book and getting to know a little more about Mr Cary Grant whom I have always enjoyed whether in comedy or mystery movies.. I would like to add a little something about the narrator, Angela Di Loreto. It took me a little bit of time to start this book because right before I was going to start it I found out that this man with the wonderful voice actually passed away on October 17. As crazy as it sounds I was very sad to listen to this book by this man who passed away so suddenly. I've listened to other audio books by him under his other pseudonym Brian Pallino and I've always enjoyed him. So I just want to say I salute him for doing what I think is a wonderful job with this narration.

Balanced Review of a Movie Legend

This biography accomplished the difficult task of balancing the positive and negative aspects of Grant’s personality. However, the narrator’s mispronunciation of many names and words was jarring. Wonderful book, but it should be read, not listened to.

I never read multiple bio's on the same subject but I don't remember much of anything of the first book I read on Grant and Scott Eyman wrote a great book on John Wayne so I thought I would give it a try. The problem isn't the writing as much as it is the subject. Grant is not nearly as interesting as I hoped he would be and, like Henry Fonda, is clearly not a person I would want to know. Grant apparently had a never-ending problem reconciling Cary Grant to Archie Leech, his birth name. This, along with a pretty nasty relationship with his parents (especially his mother) seemed to provide him with a never-ending list of excuses why he treated everyone around him like garbage, especially his first four wives. Unfortunately this takes up a huge chuck of the narrative which results in an unnecessarily long book. In the final run what I will remember is that Cary Grant was a prisoner of his own public image which never allowed him to take any real risks professionally which resulted in a LOT of bad movies. The other major beef I have is that whoever edited this work needed to tell the narrator how to pronounce the names of famous people which he butchered on a regular basis: Leslie Caron, Mel Ferrer, Michael Curtiz. I mean if you can't pronounce the name of the man who directed Casablanca and White Christmas properly then what are you doing here?

Everything you wanted to know

Comprehensive life story, to say the least. The result of prodigious research. If you are interested — at great length — in CG this is for you. My one criticism is that while the book was well-read there were a number of mispronounced proper names. Very distracting! I know because I lived through much of the period recounted. Who vets these issues for audiobooks?

I'm one of those biography and memoir junkies. And this new biography of Cary Grant is like candy to me. Yum. I didn't want it to end. I was pulled in from the very beginning with Grant's hardscrabble youth in Bristol, England, in the company of a distant dad and a mother who, without warning or explanation, suddenly disappears. I've read other reviews that bash this biography for being "exhaustive" with detail and dull as a phone book. Maybe you'll agree. But I never felt the narrative bogged down. To me it clipped along, from English music halls and American vaudeville to Hollywood--all in the company of Archie Leach, aka, Cary Grant. The author jumps between personal and professional life without missing a beat. So Grant's marriages and significant relationships/friendships get a going over as well as his important films. My one qualm was I wished, occasionally, the author would spend more time on a certain film, like "Bringing Up Baby" or "North by Northwest." Or Grant's working relationship with Alfred Hitchcock. And they do get discussed. I just wanted more. But the author was wise to pare down the stories. Otherwise, the book really would've bogged down. Other reviewers have also complained that the author keeps returning to that old question, "Was he or wasn't he gay?" Yeah, it comes up and this author, like others, can't seem to pin Grant down. Grant was and is a mystery on so many levels. Yet this biography still succeeds in making you feel like you're in the room with this intriguing, complex character--even if you never get close enough to smell his cologne. Narrator Angelo Di Loreto does an excellent job. He has a smooth delivery and keeps the story lively.

The narrator’s mispronunciation of celebrity names was distracting. Author’s incorrect statements of certain geographic and historical facts undermines his credibility.

Not crazy about the reader.

I love Cary Grant so I loved learning about him but the author is too detailed at times and went off on tangents. The reader annoyed me. He appeared to be acting, with a purposely lowered voice. I almost stopped listening but I tolerated him...for Cary.

"Even I want to be like Cary Grant" Archie Leach

This is the definitive biography of Cary Grant. It is a well-researched serious work that reads like a good novel. What a life!