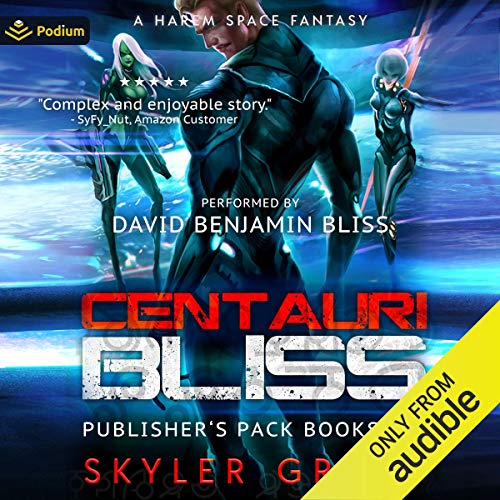 Quinn doesn't have much to his name but a broken-down old freighter; even keeping it fueled is a constant struggle on the edges of civilized space where jobs are scarce and honest ones non-existent.

With the death of the Emperor civilized space begins to dissolve into squabbling factions fighting for control and beautiful new passengers aboard Quinn's ship all bring their own load of problems and opportunities.

The Centauri Bliss has a new home on the edges of civilized space, eking out a living even as in the core the Imperium devolves quickly towards a civil war. When a job goes bad Quinn must work to keep his family same as dangers mount, even as an ancient magical threat is unleashed.

While working to stay alive and to keep the ship flying the Centauri continues to try to find a balance, and truly begins to discover its power with the combined set of talents each brings.

Warning: This book has explicit sex, nudity, murder, and a lot of crime. There is a harem, a hot alien, a cheerful robot, a kick-ass lawyer, a xeno-archaeologist in a snazzy hat. It's space fantasy and space opera, with a healthy dose of magic, and hard science doesn't apply - and a galactic threat is rising.

Filler and side quests

Sex and side quests. I don’t really know if I can continue with book 2. There’s no big picture goal/Dilemma/conflict to hook me into continue. It’s funny, certain men think one man and 7 wives would make a great story, I’m glad at least there wasn’t any nagging or whining. They also made the robotic one cook and clean and got Uber eats when she was busy.

The good parts make it worth it.

The space opera action is good, and the story interesting. I enjoyed the book enough to want to find out what happens next and I will gladly pick up the next chapters when they come out. Be aware that this books contains several fairly graphic sex scenes, something I always find a little awkward to listen to - though the narrator did a good job with them. I had two negatives. The first is the harem male fantasy written into the book - all the female characters are very attractive and want to have sex with the main male character, and each-other - everything gets very Heinlein-esque. However, most of the female characters have at least as much depth as the male character, they are skilled, and they don't need constant rescuing (at least no more than the male character). So overall, the good far outweighed the bad and awkward for me.

if you like the show Firefly then you should get a kick out of this book!

Firefly with a naughty edge

The book immediately reminded me of the tv series "Firefly". The same type of people on the border of decent and criminal, daring plans and constantly on the run.
The book reads as a number of episodes loosely connected with an underlying theme.
I cannot wait for the next books in the series.

Suffice to say I loved it

I have over 350 audiobooks under my belt. Only reason I purchased this book was my wish list is thin and I love Sci Fi, that said I really enjoyed the story, I found it fun! I have a new author to follow and the narrator was excellent, not a must listen but a definite “give it an honest shot”.

I found myself unable to continue listening mainly because of how rushed and uneventful the story is. Not to mention that the characters develop very slowly, if at all.

Excellent voice acting great range and diversity of tone for characters. Story makes use of many tropes.

The narrator gives some of the female characters voices that sound like men but I really enjoyed the story.

turns into a harem anime

first few hours are a fun firefly inspired story, then turns into a very awkward harem anime with more sex then I'd like, third sex scene was when I gave up on the story and stopped listening

The story had potential but failed. The writing felt rushed with no character development.

Middle bk 1 they all form a sex commune. WTF???

This series could have been pretty good. What a waste - glad I didn't pay for this. I'm out.