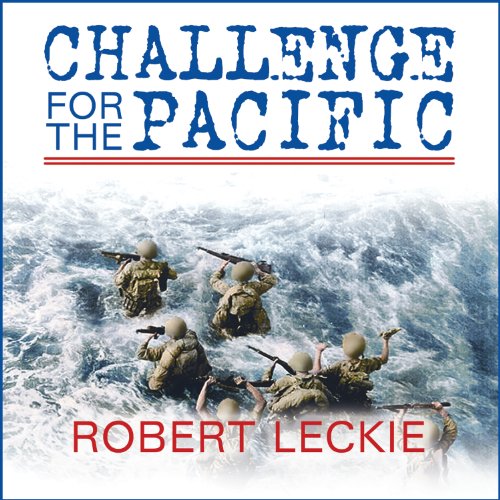 Challenge for the Pacific

Challenge for the Pacific

From the Japanese soldiers' carefully calculated - and ultimately foiled - attempt to build a series of impregnable island forts on the ground to the tireless efforts of the Americans who struggled against a tenacious adversary and the temperature and terrain of the island itself, Robert Leckie captures the loneliness, the agony, and the heat of 24-hour-a-day fighting on Guadalcanal.

Combatants from both sides are brought to life: General Archer Vandegrift, who first assembled an amphibious strike force; Isoruku Yamamoto, the naval general whose innovative strategy was tested; the island-born Allied scout Jacob Vouza, who survived hideous torture to uncover the enemy's plans; and Saburo Sakai, the ace flier who shot down American planes with astonishing ease.

Propelling the Allies to eventual victory, Guadalcanal was truly the turning point of the war. Challenge for the Pacific is an unparalleled, authoritative account of this great fight that forever changed our world.

"Leckie puts you in the foxhole." ( The New York Times Book Review)

This is my second Robert Leckie book. I enjoyed Strong Men Armed, but this book was too much like a text book. Although it had all the facts, dates and names, and was very informative, it was a dry reading. I think there are much better Guadalcanal books available. Neptune's Inferno, by James D. Hornfischer, or Hell in the Pacific, by Jim McEnery. Another Great book (from the Japanese perspective) is Japanese Destroyer Captain, by Tameichi Nishii.
They were both entertaining and informative.

An objective, but human description of Guadalcanal

I read Leckie's "Helmet for My Pillow," a very personal account of his experience on Guadalcanal, and was interested in his more formal writing. Leckie was a sportswriter before entering the Marines, and he seems to have found his life's work in writing about war. "Helmet" is all foreground, a careening memoir of goldbricking, insubordination, miserable conditions, bacchanalia while on leave in Australia, and occasional valor. Chance and boredom and resentment of authority are mixed with fear and heroism.

"Challenge for the Pacific" has a human thread throughout, giving life to the cultures -- American, native, and Japanese -- that collided on the island, but it also provides historical context and the arc of battle. It is well-organized, researched, and written. Leckie tells an objective story here, but one remembers that he was there when he describes the emotions of the Marines when they finally left the island, a small moment that no ordinary historian could have captured.

I want to read more of Leckie.

Every American should hear this.

I have listened to this six times. What a book, full of real history plus real characters. Full of excitement and suspense.

Puts you in the action

This telling of the Guadalcanal story captures the desperation and valor of this critical campaign. The story flows like a novel, and unlike many history books, it really draws you into the story.

What made this story significant to me is the family connection. My father served with the 1st Marine Division on Guadalcanal and I recall him speaking of being abandoned on that island. He was seriously injured during Japanese shelling and evacuated to New Zealand. This book puts all this into context for me.

I previously listened to “Neptune’s Inferno“ which covers the naval battles of the Guadalcanal campaign. That book is an excellent follow up reading as there is little overlap, but they are closely linked nonetheless.

Listening to this book puts you in the action...

First rate description from one of our Marine heroes who actually fought on that Island as a front-line infantryman. Very enjoyable and well written. Kudos to the skillful narration too!

The 1st Land Battle in the Pacific

This is the complete battle of the battle for Guadalcanal and the first battle fought by the " Old Breed" The 1st MARINE DIVISION And the US Navy.. I've heard the partial accounts bout never the complete accounts. This is what My father brothers dis to give us something to aim for. The story of what the Greatest Generation did to turn into become MARINES. This is a outstanding story of MARINES who gave all and landed the ground and broke the back of the Japanese Empire a great read.

I have read and listened to many accounts of the Battle for Guadalcanal, this is the clearist and most understandable, yet thoughtfully dramatic. I highly recommend the fine writing and excellent narration.

One day at a time

A great coverage from one of a battle that put America on the slow and bloody path to victory. Learning the names of the ships from both sides and the leaders made the story come alive.
America had won the war, it was just a matter of time