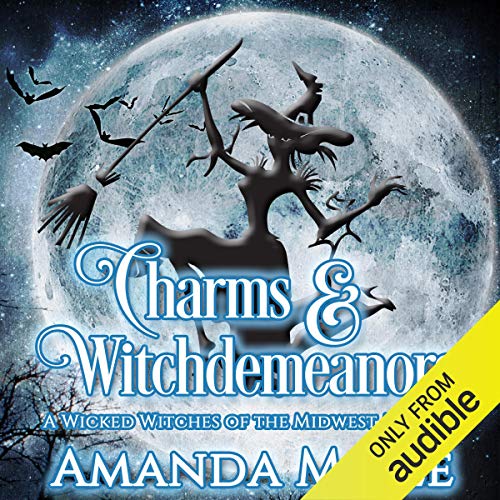 Tillie Winchester's past is about to come back to haunt her, and what she sees as fun and games someone else sees as a recipe for murder. When a local woman is poisoned at Hemlock Cove's senior center, Aunt Tillie is the prime suspect. Bay, Thistle and Clove don't believe their great-aunt is guilty - although Thistle is fine if the police want to haul her away for a long weekend.

Everyone in town is suspicious, but things spiral out of control when FBI Agent Landon Michaels' boss believes he can't be objective where his girlfriend's family is concerned and sends another agent to lead the investigation.

The new agent is gung-ho, headstrong, and making witchy enemies at every turn. When the investigation turns to the past instead of the present, Aunt Tillie refuses to talk and a long held Hemlock Cove secret risks being exposed. Bodies start piling up as old grudges overlap with new clues and the Winchesters are caught in the crossfire.

Bay is determined to clear her great-aunt's name but even she has her doubts when the victim's ghost points a finger ...directly at Aunt Tillie. It's all hands on deck for an explosive showdown that proves some secrets are best left buried. Bay just hopes she won't end up buried, too.

What listeners say about Charms & Witchdemeanors

Why ruin a perfect pairing that has lasted several books by changing the narrator?!!! I have listened to other series narrated by Hollis McCarthy and enjoyed her, but she does NOT fit this series. I almost stopped listening to this in the first two minutes because of how deplorable the narration is. Please go back to previous narrator. This series is a favorite of mine, but if this continues I definitely will not purchase any more, sadly.

The story is awesome, the narrator sucks. Thistle sounds like a dopey man. Clove sounds like a 1920's mob wife. Half the time you can't tell if the characters are male of female. I was able to ignore it and listen to the story. I don't think I will be putting it on repeat though. I know the author went with another narrator to catch-up the series but jeez. Maybe the other books can be changed to a different narrator. I would be hard pressed to keep buying this series if this narrator continues to do them. But the story is really really good if you can ignore the voices.

Story is Wonderful, Narrater is not.

I know this author had to change narrators, but this one is not good. Clove sounded like a whinny baby, and Thistle is way to butch. As for the narrating 1 star!
The Story it's self is good, as always. She is a great author. As for the story 5 Stars!

Why I loved the book I can’t stand the narrator. While some voices are similar, Bay sounds like a toddler and Thistle sounds weird. I just can’t get past the narrator. Please go back to the original narrator I might stick to just to the kindle version. Audible 20 Review Sweepstakes Entry

Narrator is terrible. It effects the storyline. Why change narrators now in the series? Bad.

Disappointed in this book.I have bought all of this series and this narrator was awful.There was so much whining and people acting like a babies. Going to return it.1 star but only because I love the characters

I love this series but

They changed the voice of the narrorator. And it's like nails on a chalkboard to my ears...

While the story itself was good, and you should definitely READ it, the choice of changing the narrator after the same person narrated the first 7 full length books was a huge mistake. The narrator has very little range and makes all the characters sound like they have mental deficiencies. The snark you are used to is lost in this audible version as the woman has no clues how the characters seem to interact. I can say this is the first full length audible story in this series I never once laughed at. I hope Aris returns as the narrator because I won't waste my money on anything else this woman reads.

What disappointed you about Charms & Witchdemeanors?

I had a hard time listening to this book with this narrator. I loved Aris. This was painful