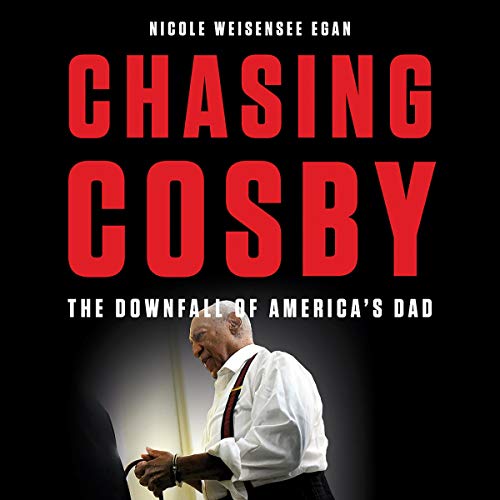 Bill Cosby's decades-long career as a sweater-wearing, wholesome TV dad came to a swift and stunning end on April 26, 2018, when he was convicted of drugging and sexually assaulting Andrea Constand. The mounting allegations against Bill Cosby - more than 60 women have come forward to accuse him of similar crimes - and his ultimate conviction were a shock to Americans, who wanted to cleave to their image of Cosby as a pudding-pop hero.

Award-winning journalist and former People Magazine senior writer Nicki Weisensee Egan was the first reporter to dig into the story when Constand went to the police in 2005. Other news organizations looked away, but Egan doggedly investigated the case, developing ties with entrenched sources and discovering incriminating details that would ultimately come to influence the prosecution.

In her debut audiobook, Chasing Cosby, Egan shares her firsthand account of Cosby's 13-year run from justice. She tells us how Cosby planned and executed his crimes and how Hollywood alliances and law enforcement knew what Cosby was doing but did nothing to stop him. A veteran crime reporter, Egan also explores the cultural and social issues that influenced the case, delving into the psychological calculations of a serial predator and into the psyche of a nation that fervently wanted to put their faith in the innocence of "American's Dad".

Rich in character and rife with dramatic revelations about popular culture, media power, and our criminal system, Egan's account will inform and fascinate listeners with its candid telling of humanity's most enduring tale: the rise and fall of a cultural icon.

"Nicole Weisensee Egan's powerful, personal account of the Cosby case is a perfect cautionary tale for our time. In the middle of the #MeToo movement, this riveting look at the shattered nice-guy facade of a man once dubbed 'America's Dad' unearths a greater truth: that the celebrities and leaders we exalt on TV (and elsewhere) are not always the people we want them to be; and sometimes the truth one finds behind the curtain of a public persona is much darker than we ever want to believe." (Mark Dagostino, New York Times best-selling coauthor of Accused: My Fight for Truth, Justice, and the Strength to Forgive)

"You might think you know the story of Bill Cosby's downfall. But until you've read investigative journalist Nicole Weisensee Egan's book, you don't know the whole story. Reporting on the case for more than a decade, Egan takes readers on a riveting journey documenting how numerous women came forward with horrific accounts of abuse leading to Cosby's arrest and ultimate conviction. The book is incredibly researched, compellingly written, and a must-read for anyone who followed the Cosby case or who wants to know the insider account of the unbelievable true story." (Shanna Hogan, New York Times best-selling author of Picture Perfect)

"Veteran crime writer Nicole Weisensee Egan takes apart one of the first great cases of the #MeToo era with finesse and ace reporting. She brings years of up-close reportage on the Cosby case, plus dozens of new interviews with accusers and back room accounts of the endless court battles, to expose the secret life of America's Dad, a premeditated sex predator and the trail of private wreckage he inflicted for decades." (Nina Burleigh, award-winning journalist and New York Times best-selling author of Golden Handcuffs: The Secret History of Trump's Women)

What listeners say about Chasing Cosby

A mountain of a book!

Nicole writes one of the most detailed accounts of what happened before and during the Cosby trial. She painstakingly lays out the timeline of accusations, behind the scenes with her own experience, and the trial itself. Well organized and easy to follow, she gives you the sense of the power that Cosby tried to wield over these women and the media. Throughout the book she brilliantly quotes experts on sexual assault trying to educate her audience. Finally, someone gave a voice to the women!!!

I think what Cosby did was henious, leaving a long trail of victims in his wake. He is properly imprisoned for his crimes. However, when Ms. Egan adopts the Male Patriarchy, Believe All Women trope of 4th wave feminism as a response to the attacks upon the credibility of his accusers she undercuts what, standing on the facts alone, is a powerful story of a beloved media icon's deciet, manipulation and use of wealth and fame as a weapon against his numerous victims.

The Bill Cosby story lucidly told by an excellent journalist. I couldn't switch it off.

This book moves far beyond bias into the ream of intense anger. On the first pages of the book, the author states that even before she read the evidence for the first reported rape victim, she "believed her story." There's no problem believing, once you read and investigate. But just believing, and expecting the reader to just believe, isn't journalism.

Prosecutors and those who oppose Cosby are treated with great respect by the author, while the most condescending comments are spewed on those who defended Cosby.

Cosby was found guilty in a court of law. A balanced presentation of the case against him, and his defense, would be interesting. But here, the author acts as nothing more than a sloppy writer for a scandal rag.

As a child I enjoyed his comedy albums, I can remember him doing his routine on the Ed Sullivan show. He really could really tell a story that could make me laugh. Now it just makes me feel sick. . . This book has really shocked and unnerved me. To think what diabolical Predator was just beneath that kind mask that he wore for so many years.

Fascinating and thoughtful account of the Cosby saga. A very sad story, made sadder still knowing there are those who still claim his innocence.

I had no idea

My favorite comedian, as a kid, and by far, was a relentless sex-starved pervert! Each and every instance of Bill going off track, way off track, is clearly illuminated here. One by one (60 of 'em). At the expense of a storyline, we hear one victim's story after another. If that's your desire then you got it here. Bill belongs where he is. From Lily White North-Western Massachusetts to looking at shiny cement cinder blocks all day. Penitentiaries were made for men like Bill Cosby,

Another step closer to people understanding. Believing in the prevalence of predators. Well documented. Thank you

Love the way the author wrote this.
She also was a great narrator.
The details over many years.

The capture of a pig

Now I know exactly what he did thank you for your book it really opened my eyes. I am part of the me too movement. however my story will never be told