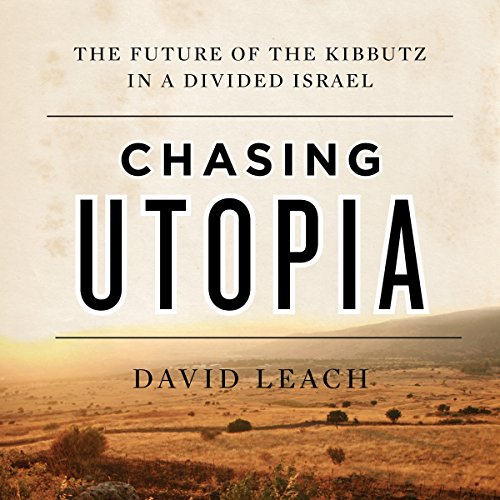 Written by: David Leach
Narrated by: Richard Clarkin
Try for $0.00

Say the word Israel today and it sparks images of walls and rockets and a bloody conflict without end. Yet for decades the symbol of the Jewish State was the noble pioneer draining the swamps and making the deserts bloom: the legendary kibbutznik. So what ever happened to the pioneers' dream of founding a socialist utopia in the land called Palestine?

Chasing Utopia: The Future of the Kibbutz in a Divided Israel draws listeners into the quest for answers to the defining political conflict of our era. Acclaimed author David Leach revisits his raucous memories of life as a kibbutz volunteer and returns to meet a new generation of Jewish and Arab citizens struggling to forge a better future together. Crisscrossing the nation, Leach chronicles the controversial decline of Israel's kibbutz movement and witnesses a renaissance of the original vision for a peaceable utopia in unexpected corners of the Promised Land. Chasing Utopia is an entertaining and enlightening portrait of a divided nation where hope persists against the odds.

"Leach reveals an imaginative and sharply inquiring mind, a gift for capturing the social complexity of the Israeli kibbutz and the troubled society beyond through humorous, moving, and often thrilling anecdotes. Lively, unsentimental, yet deeply empathic, Chasing Utopia is a new classic in kibbutz scholarship, a vibrant story with real heart and intellect." (Ranen Omer-Sherman, author of Imagining the Kibbutz: Visions of Utopia in Literature & Film, endowed chair in Judaic Studies, University of Louisville)

What listeners say about Chasing Utopia

The beginning is interesting and rings true. I was a volunteer in a kibbutz as well and now live on another kibbutz with my wife. The only thing that annoyed me in the beginning was the choice of having a non-Hebrew speaker read this book laced with Hebrew. Later on it becomes more and more obvious that the author has bought into the anti-Israel narrative that is so rampant amongst leftists in the western world. No voice for the Israeli point of view, only Israel bashing. This is one on the few books I didn't manage to finish reading using Audible. I stopped reading 2 hours and 16 minutes from the end...

My main complaint about this book is the narration: Every time Hebrew speakers are quoted, which is often, the narrator gives them a fake - what he apparently considers to be Hebrew - accent. This is entirely uncalled for and degrading to the people who are quoted. It makes them sound silly and more like drunk Russians from a third rate Cold War action movie. To top this nonsense off, the narrator mispronounces Hebrew names in spite of his silly imitation.

The content starts out interesting and varied, at times entertaining and even amusing. I actually laughed out loud about the German kibbutz volunteer who “makes the party”, knowing exactly from where this little grammatical idiosyncrasy originates.

Soon enough though, the book becomes a political manifesto, pontificating and droning on to the point of becoming unbearable. I did not finish it.