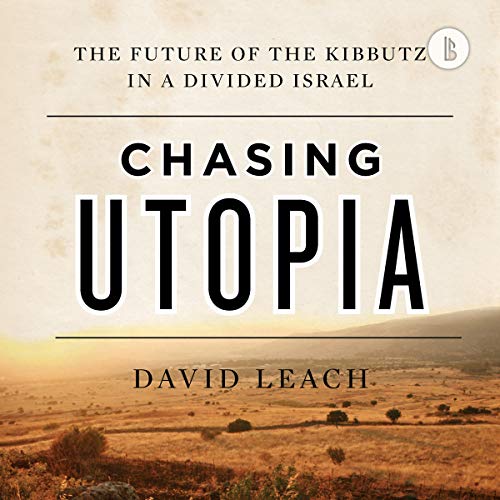 Written by: David Leach
Narrated by: Richard Clarkin
Try for $0.00

Say the word “Israel” today and it sparks images of walls and rockets and a bloody conflict without end. Yet for decades, the symbol of the Jewish State was the noble pioneer draining the swamps and making the deserts bloom: the legendary kibbutznik. So what ever happened to the pioneers’ dream of founding a socialist utopia in the land called Palestine?

Chasing Utopia: The Future of the Kibbutz in a Divided Israel draws listeners into the quest for answers to the defining political conflict of our era. Acclaimed author David Leach revisits his raucous memories of life as a kibbutz volunteer and returns to meet a new generation of Jewish and Arab citizens struggling to forge a better future together. Crisscrossing the nation, Leach chronicles the controversial decline of Israel’s kibbutz movement and witnesses a renaissance of the original vision for a peaceable utopia in unexpected corners of the Promised Land. Chasing Utopia is an entertaining and enlightening portrait of a divided nation where hope persists against the odds.

*Booktrack is an immersive listening experience that pairs traditional audiobook narration to complementary music and sound effects. The tempo and rhythm of the score are in perfect harmony with the action and characters throughout the audiobook. Gently playing in the background, the music never overpowers or distracts from the narration, so listeners can enjoy every minute. When you purchase this Booktrack edition, you receive the exact narration as the traditional audiobook available, with the addition of music throughout.

“Leach reveals an imaginative and sharply inquiring mind, a gift for capturing the social complexity of the Israeli kibbutz and the troubled society beyond through humorous, moving, and often thrilling anecdotes. Lively, unsentimental, yet deeply empathic, Chasing Utopia is a new classic in kibbutz scholarship, a vibrant story with real heart and intellect.” (Ranen Omer-Sherman, author of Imagining the Kibbutz: Visions of Utopia in Literature & Film, endowed chair in Judaic Studies, University of Louisville)