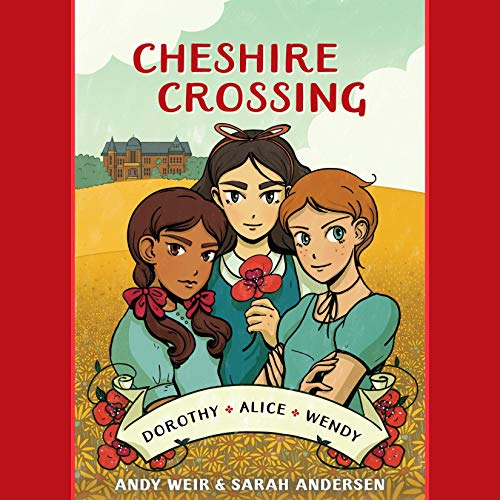 Number-one New York Times best-selling author Andy Weir tackles what transpires after "happily ever after." What happens to Alice when she comes back from Wonderland? Wendy from Neverland? Dorothy from Oz?

The three meet here, at Cheshire Crossing - a boarding school where girls like them learn how to cope with their supernatural experiences and harness their magical world-crossing powers.

But the trio - now teenagers, who’ve had their fill of meddling authority figures - aren’t content to sit still in a classroom. Soon they’re dashing from one universe to the next, leaving havoc in their wake - and, inadvertently, bringing the Wicked Witch and Hook together in a deadly supervillain love match.

To stop them, the girls will have to draw on all of their powers...and marshal a team of unlikely allies from across the magical multiverse.

Written by the number one New York Times best-selling author of The Martian, Andy Weir, Cheshire Crossing is a funny, breakneck, boundlessly inventive journey through classic worlds as you’ve never seen them before.

Audiobook Cast of Narrators:
Sophie Amoss as Alice
Brittany Pressley as Wendy
Kristen DiMercurio as Dorothy
Rebecca Soler as Miss Poole
Lisa Flanagan as the Wicked Witch
James Monroe Iglehart as Captain Hook
Neil Hellegers as Rutherford and Smee
Sean Patrick Hopkins as Lem and the Jack of Knaves
Peter Coleman as Peter Pan
and Pete Bradbury as the Narrator

What listeners say about Cheshire Crossing

I'm a big Andy Weir fan, Who doesn't love The Martian. I liked Artemis, And James Moriarty and The Egg were excellent short stories. This one? Not so much. The premise of the book is intriguing -- what if three of the most famous literary girl heroes came together and were able to travel between their respective fictitious realms? But this implementation of that idea just doesn't work, at several levels. The key issue with this book is the lack of a defined target audience. Who is it for? There are plenty of cute references and innuendos that most children would be unable to recognize and appreciate. So is it for adults? Well, in that case the language, most visibly in the dialogs, is insultingly childish. On top, many of the questions raised in the book remain unanswered, such as how come Prof Rutherford is involved in all of this? What's the whole point of bringing them together? How did they get the kids to come (there is a bit about that with Dorothy but not the other girls).

I’m a little disappointed by this, I have so far enjoyed Andy Weir’s writing. This is just a bit childish. Novels for children don’t necessarily have to be ‘childish’, they can still be written in a way for adults to enjoy. There are some adult jokes in it, which just makes it even more confusing. It just felt all wrong. No good character build up, superficial storyline etc. It just felt like naming a bunch of characters, it wasn’t very clever. Shame! A missed opportunity

At first I wasn't sure what I was going to think of it, but as it progressed the cleverness and Ingenuity of the writer began to shine. And the introduction of Miss Poole and her powers was a pleasant surprise.

This story was originally written as a 4 part comic book series, then collected and re-illustrated as a graphic novel. This production has a full cast of voice actors for all the characters, plus a narrator to bridge scenes. It's fun and funny, with lots of sly references to the original classic stories. Mary Poppins is a major character as well, although for copyright reasons they had to change her name to Mrs. Pool. There is a delicious mash-up of the fantasy realms, as the girls travel to each other's magical lands, inadvertently allowing both good and bad guys to also cross worlds, resulting in glorious mayhem. I was thoroughly charmed and entertained.

This was a great work, but it ended very abruptly and feels very unfinished. Would have liked to see the next part included before release.

Fun imaginative book! Definitely will add this to my favorites :-) easy to lose yourself in.

Interesting premise with Dorthy, Alice, and Wendy traveling together to their respective fantasy lands. Peter and Captain Hook, as well as the wicked witch are included in this story.

I really like this storyline of the famous three girls and Mary Poppins. But it was also lacking, it could a been so much more. Secretly, I hope it’s get the proper attention and gets revised so it can sit on the same shelf with The Little Women. Oh wouldn’t that be great!