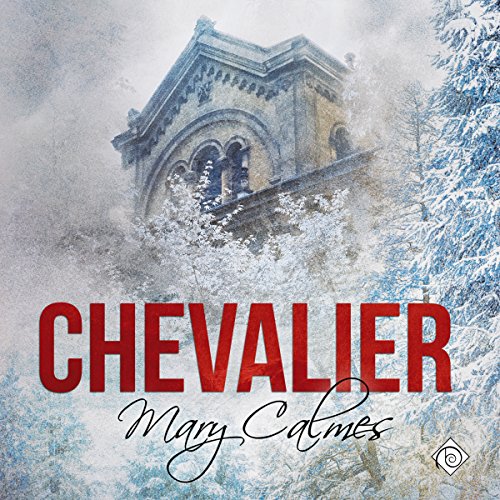 Written by: Mary Calmes
Narrated by: Greg Tremblay
Try for $0.00

Fireman Mason James thought finding out he is a Romanus - a rare class of gargoyle - would be the surprise of a lifetime, but he's proven wrong when he discovers he is the son of a comte and goji nobility. But his newly discovered family doesn't think his gargoyle lover, Luc, is good enough for a goji of Mason's stature - how could a warrior ever be? But despite the Moreaus' uncertainty and elitism, they are Mason's only chance to unravel the mystery behind his mother's death, find a solution for the class divide that might separate him from Luc, and discover what it truly means to be a Romanus.

What listeners say about Chevalier

Was an interesting story but it was missing some lore and development of characters. I enjoyed how the characters interacted but I would have loved to see more.

What can I say? I love Mary Calmes and Greg Tremblay. Add them together and I am one happy camper.

Though you could enjoy Chevalier without first reading/listening to Romanus, I would not recommend it.

Picking up a year after the end of Romanus, Mason "Mace" James is settled into his chasse (or tribe) of gargoyles, doing well in his day job as a fireman, and realizing the future he wants with his lover, Luc.

I loved how, once Mace accepted his feelings and hope for the future, he was unwavering in his love and support of Luc and their relationship. I especially appreciated the history and explanation of Mace's goji roots we get in this installment.

Tremblay's character voices and accents are lovely, and he illustrates the emotions (passion, tenderness, exasperation, and even anger) in the story so well, managing to draw the listener in almost effortlessly, creating a whole world that I didn't want to leave.

First, you must read Romanus before you read this. It won’t really make sense as a standalone.

We met the two lovers Luc and Mason when Mason had stumbled upon Luc’s chasse of gargoyles to find out that Mason was actually a Romanus, something revered by the gargoyles. Unfortunately, they don’t know much about what that means and the main driving force in this story is to find out just what it means to be a Romanus so that the tension in the chasse will let up.
There’s an added element of mystery when a family comes from France claiming to be related to Mason. Some threats are made and Mason and Luc fly over the ocean to research being a Romanus with the keeper of the gargoyle history and to find out more about Mason’s family as well.
Meanwhile, at every turn, Luc is met with derision, scorn and contempt because he is of a “lower class” than the Romanus – at least historically. Mason will have none of this and this helps Luc and Mason to iron out their own relationship issues.
**
I fell in love with Romanus years ago and was so psyched to see this sequel finally come about! It does not disappoint! In typical Mary form, Mason is absolutely perfect, Luc is tough as all get out and the bad guys are really bad and easily seen through. But… there’s some fascinating twists and turns this story takes that keep the storyline fresh and proves to me – again – that when Mary writes paranormal she really shines her brightest.
I loved this sequel and highly recommend it to fans of paranormal stories, fans of Mary Calmes and fans of Romanus and Gargoyles in general.

Greg Tremblay rocks this - AGAIN. He's such an amazing performer. He brings these stories to life and lets us listeners BE THERE in the action. Highly Recommended!

Love me some Gargoyles!

Would you consider the audio edition of Chevalier to be better than the print version?

I didn't read this one, only listened, but I can't imagine anything Mary Calmes writes NOT being good!

What was one of the most memorable moments of Chevalier?

When Mason comes to the realization that instead of pushing, he needs to be pulling.

If you could rename Chevalier, what would you call it?

I don't like this question, there is nothing wrong with the title the Author gave the story.

A lot has happened in the year since Fire Fighter Mason James learned he is not only a Gargoyle, but a Romanus. He is treasured among the Gargoyles, someone that can bridge the gap between Gargoyles and the dead because he can see them, hear them, communicate with them. He also found a boyfriend at the same time he learned of his Gargoyle status, Luc Toussiant, who is a Leon which translate to a guard or guardian in the race of Gargoyles. Mason has spent the past year keeping Luc at arms length, fearing moving too fast. When his birth family shows up on his doorstep, basically demanding Mason accompany them back to France to meet his father and claim his birthright... Mason is less than pleased, but he complies. His and Luc's relationship will be put to the test as will Mason's abilities, and so much more than their relationship is challenged by the family Mason doesn't want.

What an amazing series this has turned out to be. I sincerely hope that we get Finn's story soon. Back to Chevalier though. The threat in this installment of the series may seem less severe than the whack job in Romanus, but it is actually way more dangerous. I am so engrossed in the relationship between Mason and Luc and how it continues to grow and evolve. Mason finally comes to the realization that Luc is not only all he wants, he's all he needs. There is also a point in this story where Luc goes off the deep end a bit, very dramatic and suspenseful, and I loved how it played out. Mason was the only one that could reach him, and even in the height of the anger and confusion that had a strangle hold on Luc, he was able to recognize the bond with Mason.

Greg Tremblay is, in my humble opinion, one of the best narrators ever. He has an army of accents, tones and nuances in his voice and regardless of how many characters are in a story, he manages to give everyone their own voice and truly bring the Author's words to life. One of my favorite lines in the book is when Mason's recently revealed brother tells Mason he'll be at Luc's mercy (can't really elaborate on that without spoilers) and Mason responds... "Oh... God, I hope so." ... it's the way Tremblay delivers this one line, just five words. It holds so much emotion that it stands out and commands your attention.

Definitely a must listen as are any books that Tremblay voices and/or Calmes pens. Start with Romanus though, or you'll be lost.

I wish there was another sequel this book is so good and Greg’s voice is lovely!

And now I want more

Great continuation of the story. It's good to see the relationship evolving between Luke and Mason. I want to know more about Mason's family. I want to know more about the Guardian and Battlelords. Hopefully there will be more. There were some odd bits with Mason's family that don't sit well, as in not very believable in their interactions. However, I still thought this was a lot of fun and would like some more, please.

Interesting - Tremblay does an amazing job

Well I did like this one more than Romanus so I'm glad I didn't give up. The whole mythology behind the story was creative and well done. The characters were interesting and the relationship between the MCs was fantastic, very hot.

Greg Boudreaux was wonderful, as always, but he did bring it with all the gruff and growly voices required for the secondary characters - kudos on that!

I put on my Calmes glasses and enjoyed the ride

This is not a standalone, and cannot be read without reading Romanus first.
This story picks up about one year after Romanus left off. And I'm very glad that Calmes decided to give us a sequel because things with Mace and Luc felt a bit incomplete.
This was full of action and kept me on the edge of my seat. I love that Mace stood by Luc, even though the newly discovered goji hierarchy forbid him from marrying him.
Fans will enjoy it.

A most polished Diamond

I have listened to many audio books and many narrators, but this was something Special. Mary's story was excellent , almost anybody could have read it and done fine. But Greg Tremblay did the most amazing job, bringing this to life. The pace was full of life and for the first time I am truly sorry that I can only give this a score based on 5 stars. Mary should get 10 for the characterization and story and detail. Greg in his performance should get 20. It was shorter, well paced, and perfect overall.

Independent reviewer for Divine Magazine, I was gifted the AUDIO version of this book.

Mason is settled into his life with his Goji mate, Luc. He still isn't quite sure what exactly being Romanus means, but he'll figure it out. When Mason's father turns up, Mason and Luc face much more bigotry and ingrained belief that they should not be together. A trip to France to find out more about Mason's mother takes a deadly turn.

I said in my audio review for Romanus that I could not split the audio narration from the story. Since Greg Tremblay does an amazing job second time around, I stand by that here. I can't split it!

3 hours and 37 minutes is not a long book for me, it was a plane ride to Spain in this case, but we get more of Mason's history, what happened to his mother, and how he came to be where he is now.

And we get just what being Romanus really means. I'm not gonna spoil it for you, listen or read yourself to get it, but it doesn't quite mean what the rest of the Goji have been led to believe.

There are a host of new characters here, most with French accents. Tremblay pulls them all off beautifully. And I'm left wondering about them. Some, anyway. The Guardian, Gabriel, he needs a story, certainly. And how Mason's best friend and the leader of Mason's clan (I'm sorry, there is a special word for it, but I haven't seen it written down, and have no idea what the word looks like!) finally got together.

I just feel like I'm missing something! And other than the fact that, again, we only get Mason and not Luc, I cannot, for the life of my figure out what I think I'm missing! GRRRRRRRRRRRRRRR!

again Marie Combs comes out with a sensational book. excellent love story between luke and mason, overcoming diversity an antiquated stereo types. it shows what a great love can overcome even family.