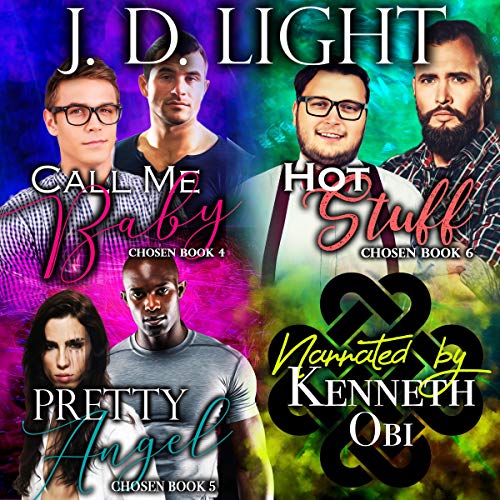 Call Me Baby: Chosen, Book 4
Burke is Foster's best friend's little brother. Though they've never met in person, every conversation Foster butts into when Burke is trying to talk to Sutton, ends with them arguing. In truth, Foster has been scared to actually meet the blond boyband looking nerd, because he's pretty sure the little cutie is his mate. He's about to find out.

Pretty Angel: Chosen, Book 5
Rory is on the run, homeless and scarred, both physically and mentally. What he wants is to blend in, but instead, he catches the attention of Green, a big, beautiful tech guy who might turn out to be just the protection he needs.

Hot Stuff: Chosen, Book 6
Davis has been sent by his father to try to persuade Ward into signing with his father's publishing company. But when he meets the gorgeous writer, the chubby cutie with the worst case of verbal diarrhea knows he doesn't have a chance with Ward, the delicious lumberjack looking recluse, except that he does seem interested. Really interested.

Overall this is such a fun series. Each story focuses on a new couple, has a plot between them, but has a small recurring plot that links them to the rest of the guys and the Leap.
Call Me Baby book 4. This is Burke, Sutton’s little brother and Foster (Sutton’s best friend) the Fox shifter that has been eluding the pack though he hasn’t been trying. So, in this one, we get the Best friends brother type story.
Pretty Angel is a bit more angsty than the others so far. Rory shows up at the café they all hang out for a job. Green, the leaps tech guy, has found his mate. But Angel has a secret past and could run at the drop of a hat. He is beautiful despite the scar on his face. I loved Angel. Though he had been through so much (his story is quite sad) he is strong and willing to fight for his freedom. Green is willing to do what he has to to get Rory over his fears to trust them and become his.
Hot Stuff book 6. Though I love them all, occasionally I get a favorite like I did with Thompsyn in book 2. Ward and Davis are my new favorites. This one lightens the angst from Rory’s story with a chubby Davis with a hateful father that puts him down and insecurities. Ward likes a man with more meat on his bones and when he meets Davis he is everything he ever wanted in a mate. Now to get him out of his bigoted father’s clutches and show him the books he edits are not all fiction.
If you like a good shifter book, with some humor, light angst in a few stories and interesting plots this series is absolutely great!
I recommend the narration. Kenneth Obi gives these stories so much life and excitement.

The overarching plot is this series is pretty good. Through each book there is a serious issue and people need to be rescued. The action part of the stories is very well done. However, each individual story, to me, feels rushed. There is very minor character development, the couples bond and then the stories end as abruptly as a slamming door. There is just little depth to any of the relationships. There is an effort to include previous couples in each subsequent book, so that’s a plus. For an ongoing series it isn’t very fulfilling to see a shallow start and snippets of a brief beginning then BAM! on to another couple. The series is decent enough for a quick break from reality (kind of like getting a day off work), but not good enough to immerse yourself in a mental holiday/vacation. If you really crave the climax of most stories- where the heroes finally fall in love and bond, you will enjoy these stories.

It was enjoyable, I liked the characters and the overall storyline. The narrator is absolutely fantastic!

These books just make me feel so good, like a warm blanket on a cold night. The characters are likable and I wanted to hug them all (the good guys). I did have a favorite couple in this one- it was Ward and Davis. They had me melting almost from their first meeting. The world building is magically fantastic. Great series. I voluntarily listened to a free copy of this and am giving an honest review. The narrator brought the characters to life.

Kenneth Obi does a wonderful job of bringing the sweet, funny, and sexy characters of J. D. Light's Chosen series to life. Sweet Angel and Hot Stuff are two of my favorites, and listening to them brought to life was a real treat.

Loved the story line. This Author is 1 click quality! Ken Obi is a genius at narrating! I'm sad he won't be able to narrate the rest of this series past book 9. RIP Ken.

Favourite Bundle of the Series

I had to write this review again because the 1st time didn't post, hopefully 2nd times a charm lol
Call Me Baby: Chosen, Book 4
I loved Burke from the beginning of this story. This is my absolute favourite kind of trope - Nerd meets sexy shifter. I felt for Burke when he got attacked by some crazy nut trying to claim him. I loved the banter and relationship between him and Foster. It's really sweet that foster was trying to avoid Burke for years since he had an idea that he was his mate. I really enjoyed this book it was fantastic!!
Pretty Angel: Chosen, Book 5
These books keep getting better and better, as soon as I fall in love with one another one pops up that is better than the last. I loved the way the author described Rory and you really get a very beautiful image in your mind with his long hair, feminine features and yet strong jaw to indicate his masculinity. In real life Rory would be stunning with or without the scars. So when Green comes into the picture and is calling him "pretty angel" I just melted and swooned every, single, time!!! These two were absolutely perfect and I loved them!!!!
Hot Stuff: Chosen, Book 6
Davis was so hilarious, I couldn't stop from either giggling or laughing out loud through most of this book. I actually had to listen to it twice since I had no clue what was actually happening in the story line. His verbal diarrhea along with all the talks of dick, Holy hell. It was so good. I have no idea how Kenneth kept it together and didn't bust a gut laughing from Davis antics. Kudos to his narration because I would have been in tears and trying to breath while reading this story out loud. I was given this free review copy audiobook at my request and have voluntarily left this review.

I absolutely loved this bundle and sooo looking forward to the next. and who doesn't love a Kenneth Obi narration?? 100% reccomend!!

I have listened to every chosen book available on audible. This is 3 stories that are shorter, but follow great plot lines. I love how J.D. Light made the characters real and relatable. Not everyone is your stereotypically perfect character, but they make them all perfect and relatable to all people. The details in how characters are matched is wonderful. Kenneth Obi as always brings the characters to life. These chosen stories are worth listening to more than once. I highly recomend this section of a great saga.